From Bofors to 'Brashtachari', Indian politics changed under Narendra Modi. Rahul Gandhi is perhaps the last to know

By taking on Modi with 'Chowkidar Chor Hai', Rahul Gandhi perhaps thought he was avenging Bofors. He didn't realise the new tenacity and bite in political leaders today, until the rejoinder arrived.

Maintaining the tempo for a seven-phase election is tougher than keeping the interest alive in a Five Test Cricket series.

It calls not just for tenacity but also a great deal of ingenuity. But, sometimes, the opponent helps a master-blaster by bowling a full-toss.

Rahul Gandhi was perhaps both rash and brash in claiming premature credit for having “dismantled” Narendra Modi’s “clean” image.

Narendra Modi is not one to miss the chance of hitting a loose delivery out of the stadium.

That is precisely what he did in his rally at Pratapgarh, Uttar Pradesh, on Saturday. As expected, the ball landed like a cat among the pigeons in far-away Lutyens Delhi.

Seen in isolation, the comment may appear inappropriate. Naturally, it has hurt the sensibilities of the sophisticated upper crust, who consider it to be in poor taste and unbecoming of a Prime Minister. Congress supporters are, of course, up in arms, calling it an insult to their beloved departed leader, who was martyred for the cause of the country, and crossing limits of political civility.

Modi Ji,The battle is over. Your Karma awaits you. Projecting your inner beliefs about yourself onto my father won’t protect you. All my love and a huge hug. Rahul

Mr Modi is known to choose his words with care. So this could not have been a casual off-the-cuff statement. A look at the clip of his speech would show he took time to train his gun on the target like a consummate shooter before firing the salvo — and the response of the crowd leaves no doubt that it hit the bull’s eye in the first shot. The "Karma" effect: When the opponent helped the master-blaster by bowling a full-toss. (Photo: DailyO)

This piece is not meant to be a defence for Modi’s speech. He is perfectly capable of fending for himself — as indeed he has done by his tweets.

My one comment on the corruption of a former PM has riled the Congress eco-system so much but constant, below the belt remarks on a sitting PM, his family, his poverty have no effect on them!Constant badmouthing of historical greats by one Dynasty doesn't affect them either! pic.twitter.com/mfMWZDJqRN

My open challenge to Congress.Fight elections in the name of the former PM associated with Bofors in:Delhi and Punjab, where innocent Sikhs were butchered in his reign.Bhopal, where he helped Warren Anderson flee after the infamous Gas Tragedy.Challenge accepted? pic.twitter.com/CstT0VyITd

But it is meant to highlight a change in order that the old establishment and the intellectual elite are refusing to understand.

The legendary Jyoti Basu once famously said after his party cadre were accused of violence, “If they pelt stones at us, do you expect us to reciprocate with Rosogollas?” It might be instructive for the Congress and Rahul Gandhi’s cheerleaders to pause for a  moment and reflect on what would be have been the reaction of one of their friends or allies, like Mayawati, Lalu, Mulayam or Mamata, if similar accusations were hurled against them.

It is hard to imagine any of these earthy leaders would have been more subtle or polite than Narendra Modi. So, in a perverted way, it is truly “Karma” at play — where one reaps as one sows.

That era, when ordinary folk from humble origins were shy of answering back to royalty, is long gone. Now, they give back as good as they get — not just in politics but in every walk of life, as it ought to be in a democracy. In an egalitarian society, no one should pull rank or family title even at the workplace. As a country, we may not be there yet totally, but certainly, there is no premium on feudalism any more.

One of the biggest changes Modi has brought about (somewhat inconspicuously) is systematically demolishing the culture of “entitlement” with one of “empowerment” — especially among the youth. That is why, while the commentariat may be shocked and aghast at the perceived “coarseness” of Narendra Modi’s attack on Rahul Gandhi, his supporters seem to not only approve, but are also rejoicing over the rejoinder.

That is where Rahul Gandhi’s advisers may have made an error in judgement. They were right in telling the boss “a clean image” was Modi’s biggest asset. But they probably did not warn him that Narendra Modi is no Rajiv Gandhi — so, to do a Bofors on Modi may be fraught with the risk of backfire. 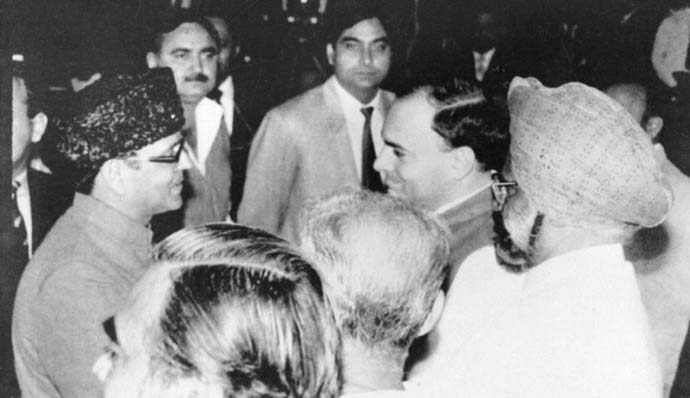 Rajiv Gandhi was known for being soft-spoken. Things have changed in Indian politics since. (File photo: PTI)

Initially, analysts and political pundits had billed this election to be a Presidential one. Accordingly, the media built it up as a fight between Rahul Vs Modi. The fall-out they did not anticipate is the disintegration of the Mahagathbandhan, as other allies were not willing to make Rahul Gandhi the default Opposition candidate for Prime Minister.

Thus, the narrative changed quickly from Rahul Vs Modi to “anyone but Modi”, making it a virtual referendum on Modi.

This was a gift for Modi as it relieved him from answering on local issues and, instead, focus on his own “Personal Brand”.

Thus, he turned Rahul’s slogan “Chowkidar Chor Hai” to “Main Bhi Chowkidar”. Modi’s advantage (as distinct from the BJP as a party) is that he is not strongly identified with any caste, unlike other Hindi heartland leaders. Thus, the slogan resonated across caste constituencies and age groups.

Though Rahul Gandhi’s communication team had coined “Chowkidar Chor Hai” with reference to the Rafale deal, Modi enlarged the definition on multiple dimensions, from National Security (surgical strike and Balakot) to the campaign against corruption.

After the first four phases, no one will predict if Modi can still carry the day against a combined (if not united) opposition. However, many are willing to bet that the Congress may not be able to increase its tally above double digits. In that situation, even if it emerges as the largest party, Congress will not have the critical mass for asserting moral authority over allies.

Under such circumstances, for Rahul Gandhi to project himself as the Prime Minister in waiting smacks of immaturity.

The three main opposition leaders of the North — Mayawati, Mamata and Akhilesh — have not conferred that title on him. Once together, now no more. The Mahagathbandhan leaders seem to have left Rahul mid-way. (Photo: PTI)

From ground reports coming in, other than Mamata Banerjee and, to some extent, Navin Patnaik and DMK in the South (not counting YSR Congress and TRS as the opposition), other “Gathbandhan” leaders are not showing much skin in the game. There could be several reasons for that. It is possible that they are not excited at the prospects of a weak coalition with Congress at its centre. They may find it prudent to save the powder to give a more spirited fight in the next assembly elections.

Rahul Gandhi too could have learnt from them and chosen to conserve the brand equity he acquired over the past few months without blowing it up in juvenile bravado. Modi’s common thread in the election has been against family-ruled parties.  If the “Main Bhi Chowkidar” line was beginning to lose steam, Rahul Gandhi has added fuel to Modi’s campaign by providing him with a raison d’etre to make it a fight against the dynasty.

If nothing else, it would seal the fate of the battle in East UP for the Chowkidar.

Also Read: How low can they go? Elections 2019 is seeing our politicians only fall lower and lower in mudslinging and maligning

#TRS, #YSR Congress, #Naveen Patnaik, #Rahul Gandhi
The views and opinions expressed in this article are those of the authors and do not necessarily reflect the official policy or position of DailyO.in or the India Today Group. The writers are solely responsible for any claims arising out of the contents of this article.