On October 28, Brazil will hold its second and final round of elections for the President’s office.

On October 28, Brazil will hold its second and final round of elections for the President’s office. The election outcome is being watched anxiously, as the front runner for the presidency is Jair Bolsonaro, a far-right candidate with notoriety similar to US President Donald Trump.

Many political observers argue that the wave of right-wing populism — marked by xenophobia, authoritarianism and misogyny — that continues to dominate the United States and much of Europe, is now ready to engulf Latin America’s most prized democracy. Far right: Jair Bolsonaro, a non-influential lawmaker with no visible record of public service, has been able to win a massive 46% of total votes. (Photo: Reuters/file)

This may be true, given that Bolsonaro, a non-influential lawmaker with no visible record of public service, has been able to win a massive 46% of total votes — some 50 million Brazilians have endorsed his candidature.

The 63-year old Bolsonaro’s relatively obscure Social Liberal Party has captured 16 of the 26 states of Brazil, and has won 60% votes in Rio de Janeiro and the country’s national capital territory, Brasilia. A strong wave of anti-establishment politics swept away more than two-thirds of incumbents.

What makes this election so interesting is the fact that Bolsonaro has been able to achieve this feat despite being completely outspent by rival candidates from mainstream parties.

In terms of resources and traditional modes of campaign, the far right candidate is nowhere near his rivals. 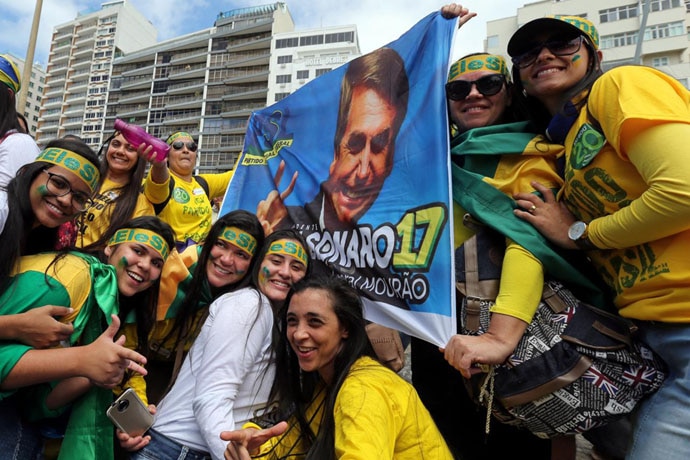 Bolsonaro is the front-runner — despite being completely outspent by rival candidates from mainstream parties. (Photo: Reuters)

Bolsonaro’s party, too, is much smaller than the two mainstream parties.

Yet, like Trump’s campaign style, Bolsonaro has launched an effective social media campaign to reach out to ordinary Brazilians.

By casting himself as a ‘law and order candidate’ and by offering the police a free hand to kill criminals — similar to what the Philippines president Duterte has been doing — the far right candidate has evoked the interests of common citizens fed up with growing crimes and lawlessness.

Very few people in Brazil had ever thought that an extreme far right candidate would emerge as the front runner for the country’s highest office. What’s driving Brazil’s much-matured voters to elect a right wing, authoritarian and misogynist candidate? While conceding sympathy votes for Bolsonaro over the attack on his life weeks before the elections, and the rejection of ex-president Lula’s nomination adding up to his spectacular late surge, a number of factors have produced this worrisome spectacle — threatening the very base of Brazil’s liberal democratic order.

First, like the trends in the US and Europe, the average citizen in Latin America is unhappy with the state of politics, and politicians from mainstream parties.

This is because, in the past few years, Brazil’s political scene has witnessed significant upheavals, or indeed, what many analysts call ‘political circuses’ — the dramatic impeachment of Dilma Rousseff of the popular Workers’ Party, sensational indictment and subsequent imprisonment of Lula over corruption, and the indictment of top politicians from nearly all major parties over the Lava Jato (Operation Car Wash) investigations involving bribes of several billion dollars.

Thus, the average electorate in Brazil seems to have grown cynical of mainstream politicians. A recent survey by not-profit Latinoborometro found that only 13% Brazilians are satisfied with democracy, and a vast majority feels that politicians get elected only to make money. Brazil's mainstream politics has been rocked by scandals, such as the dramatic impeachment of Dilma Rousseff. (Photo: Reuters/File)

The second and most important driver for polarisation is growing economic uncertainty. It should be noted that Brazil, which witnessed breakneck growth a few years ago largely owing to strong global demand for natural resources, is today experiencing its worst-ever recession. Latin America’s biggest economy is today facing one of the highest unemployment rates and the quality of life has deteriorated rapidly over the past few years.

With this, there is a high degree of inequality, as the six richest men have more wealth than the wealth of 50 percent of the poorest population in the country.

Third, on his part, the far-right candidate has cultivated an image of a former army man, an “outsider” determined to take on rampant corruption, and the culture of sleaze and patronage that have become synonymous with political office. 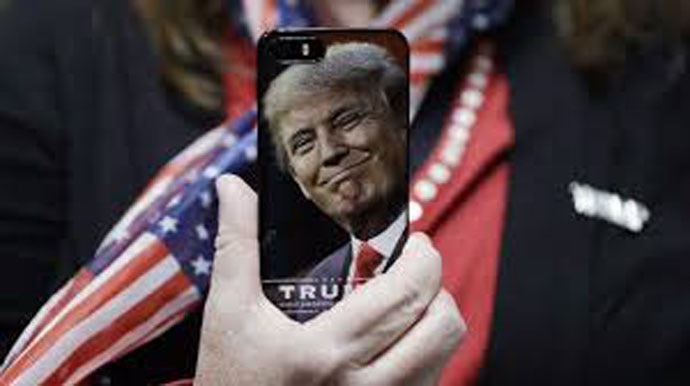 Bolsonaro has made effective use of social media in his campaigns, like Donald Trump before him. (Photo: AP)

What has helped his cause is the quick reinvention of his image as an economic liberal committed to reform the country’s bloated pension system, which has been manipulated by elites, and offer attractive incentives for foreign investors to create jobs.

What, however, caught the attention of most citizens is his populist promises to ease environmental restrictions cracking down on rising crimes. He has proposed to loosen gun control laws to allow ordinary citizens to acquire their own arms, and pull out his country from the Paris Treaty on climate change — something he has generously borrowed from Trump’s playbook.

This has won him many supporters, especially the private business and traders, and also won him support from educated, rich and older white men.

In short, the once diverse and centre-right Brazilian society is witnessing unprecedented polarisation at all levels — politics, society and civic spheres. The Bolsonaro phenomenon is an outcome of this sharp divide. Things that once looked totally unacceptable in mainstream society now seem all fine.

In earlier decades, no front-runner for the president’s office could dare to make insensitive remarks against racial minorities, LGBT communities and immigrants—but Bolsonaro could do this and still be on the verge of making it to Brasilia.

The costs of this are very high for the democratic system and society at large, and no one in Brazil has a clue about what might stop this phenomenon. However, many feel this might be an aberration, and Brazilian society is resilient enough to face this up. Their hope rests on structural constraints placed via the Congress and its governing coalition system, to act against any kind of authoritarianism.

Also read: Why I ran for a seat in the Afghan Parliament