Why BJP shouldn't have been allowed to form government in Karnataka

In an appalling but expected turn of events, the governor of Karnataka decided to invite BJP’s BS Yeddyurappa to take oath as the state's chief minister. It was already rumoured that the governor had taken a decision to this effect much before it was finally confirmed with a communiqué by the Raj Bhavan around 9pm on May 16. It was also inexplicable that the news was initially broken by Karnataka BJP’s official Twitter handle.

But almost on cue, the Congress high command in New Delhi reacted swiftly to move an urgent petition seeking a hearing in the night to try and prevent the swearing-in. By midnight, it was revealed that the chief justice of India, Dipak Misra, had consented to an urgent hearing. The bench constituted by the CJI to hear the matter included justices AK Sikri, SA Bobde and Ashok Bhushan. 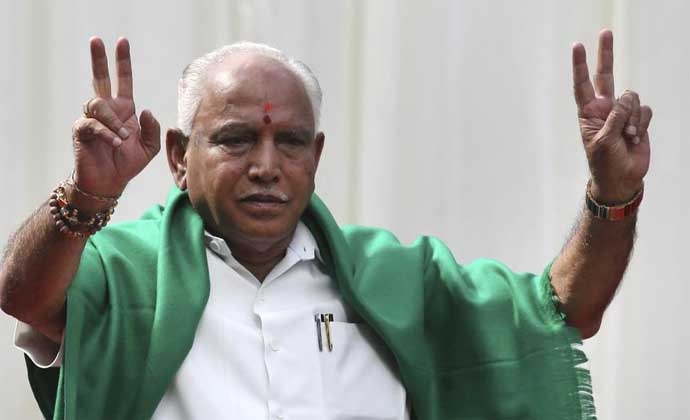 By hook or by crook? [Credit: AP photo]

The Congress’s case was that the decision of the governor inviting BS Yeddyurappa to be appointed as the chief minister of Karnataka and granting him 15 days to prove his majority was unconstitutional, arbitrary, illegal and violative of Article 14.

Arguing his case, Singhvi referred to the Sarkaria commission’s recommendations (referring to paragraph 4.11.05) wherein it is mentioned that “the governor, while going through the process of selection described above, should select a leader who, in his (governnor's) judgement, is most likely to command a majority in the Assembly”.

Justice Sikri shot back with paragraph 4.11.04 of the commission’s recommendation where the order of precedence to be accorded is explicitly given.

The governor should select a chief minister from among the following parties or group of parties by sounding them, in turn, in the order of preference indicated:

1) An alliance of parties that was formed prior to the elections.

2) The single largest party staking a claim to form the government with the support of others, including "independents".

3) A post-electoral coalition of parties, with all the partners in the coalition joining the government.

4) A post-electoral alliance of parties, with some of the parties in the alliance forming a government and the remaining parties, including “independents” supporting the government from outside.

Seems eerie to be at 2 am at same place where u spend whole days, indeed a whole lifetime! In sc with juniors at 2 am on 17/5/18 pic.twitter.com/PEAQqSdjTA

Justice Sikri asked Singhvi: “You (Congress) are at three but your case is that they (BJP) are not at two?”

To a layman like me, it struck me as odd Abhishek Singhvi referring to the Sarkaria Commission’s recommendations since it was already being cited in the media as part of BJP’s defence of the governor’s stand.

When justice Sikri referred to the court approving the recommendations of the Sarkaria Commission in Arunachal Pradesh in former CM Nabam Tuki’s case, Singhvi cited examples where a combination of parties was given preference over the single largest party. Meghalaya, Manipur, Goa, Delhi (2013), Jammu and Kashmir being some of the recent precedents.

But Singhvi thereafter referred to the Rameshwar Prasad case (2006) — though he did not refer to the SR Bommai judgement (1994).

The basis for limiting governor’s discretionary power was laid down by a seven-judge Constitution bench of the Supreme Court in the landmark SR Bommai case in March 1994. It was further refined by the court in the Rameshwar Prasad case in January 2006, when a five-judge bench had adjudicated: “There is nothing wrong in post-poll adjustments and when ideological similarity weighs with any political party to support another political party though there was no pre-poll alliance, there is nothing wrong in it.”

Coming back to the pre-dawn proceedings, Singhvi also contested the governor’s decision to give Yeddyurappa 15 days to prove his majority.

In his submissions on behalf of the Union government, attorney-general KK Venugopal tried to argue that “anti-defection law would apply on the MLA-elects only after they were sworn in on the floor of the House”, to which justice Sikri responded with, “does that mean all the suitcase exchange is possible before they are sworn in? That's impermissible".

As a keen political observer, I couldn’t but conclude that this could have been BJP’s rationale all along to emerge victorious as and when the floor test is held.

When the bench sought to know from the A-G the grounds on which Yeddyurappa staked claim to form the government, he referred to the letter submitted to the governor dated May 15 and 16 by Yeddyurappa. But it wasn’t available for the court to inspect and the court realised that respondent BS Yeddyurappa wasn’t represented in the court. Mukul Rohatgi had clarified that he was not representing Yeddyurappa but "some BJP MLAs from Karnataka who woke him up from sleep".

In fact, Rohatgi referred to the loss of sleep at least four times during the proceedings leaving one to wonder if it was a deliberate strategy on his part to evoke similar sentiments from the bench.

When justice Sikri proceeded to make an oral observation that they wouldn’t restrain the swearing-in, Abhishek Singhvi interjected with: “If Yeddyurappa comes with the letters and the court finds there is no merit in my case, I am out. Else I am in. But once he is sworn in then the whole thing will have to be reversed."

He also made an issue out of Mukul Rohatgi representing Yeddyurappa in proxy. Singhvi also appealed to the bench to defer the swearing-in pending the bench inspecting the letters submitted by Yeddyurappa to the governor.

In the end, the court decided not to defer the swearing-in, but made it conditional on the A-G producing the letters Yeddyurappa wrote to the governor and pending the decision of the court in this petition. A notice was issued to the respondents and the case is slated to be heard tomorrow (May 18) at 10.30am.

While it is certainly commendable that the Supreme Court heard the petition urgently and made Yeddyurappa's swearing-in conditional, it wasn’t clear why the swearing-in couldn’t be deferred till the bench was convinced the decision taken by the governor is consistent with law.

Didn’t the court end up giving a window to Yeddyurappa to conjure up the numbers through illegitimate means by not deferring his swearing-in? It has come to light that Yeddyurappa swiftly nominated an Anglo-Indian member to the House today to bolster his numbers.

It also gives the BJP a fillip to indulge in poaching and horse-trading to further improve their tally. One only hopes that the court will arrive at a definite conclusion tomorrow (on the basis of Yeddyurappa’s letters) if the decision of the governor to swear him in was arbitrary and unconstitutional.

You only need to apply common sense to arrive at a conclusion that the BJP doesn’t have the numbers; the cumulative tally of Congress and JD(S) is six more than the halfway mark. And the Rameshwar Prasad judgment settles it beyond doubt.