Gathbandhan Games: As SP, BSP finalise tie-up, UP looks set for a triangular fight. But who will this really work for?

Could Congress not joining the SP-BSP front in fact help the BJP?

As the 2019 Parliamentary Elections come closer, several alliances and tie-ups — of varying levels of ‘grand’— are taking shape.

Uttar Pradesh, the state with the most number of Lok Sabha seats, seems to have decided the contours of its political battle. According to media reports, the Samajwadi Party (SP) and the Bahujan Samaj Party (BSP) have finalsed their seat-sharing arrangements — and the Congress is not a part of the alliance. 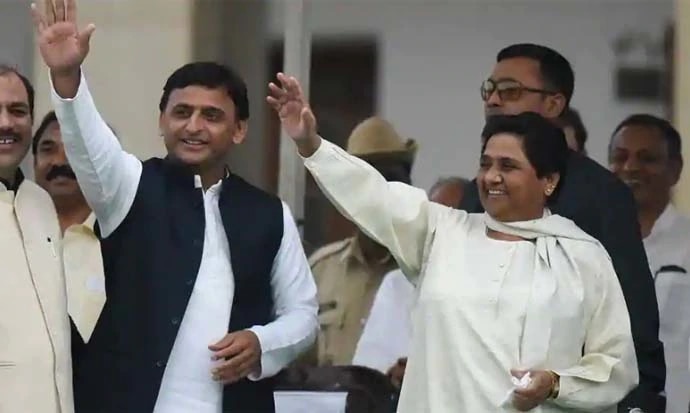 Two is a coalition, three is a crowd — there seems to be no room for the Congress in the UP alliance. (Photo: PTI/file)

According to reports, the SP will fight on 34 seats, the BSP on 35, and two seats will go to Ajit Singh’s Rashtriya Lok Dal.

The alliance will not field candidates from Amethi and Raebareli, the constituencies of Congress President Rahul Gandhi and UPA chairperson Sonia Gandhi respectively.

The alliance will reportedly be announced on January 15, the birthday of BSP chief Mayawati.

So what are the strengths and weaknesses of this anti-BJP gathbandhan in Uttar Pradesh — and what are the implications of the Congress not being a part of it?

The first and foremost strength of this tie-up is that it is going to evolve a broader social alliance of two social groups — Dalits and OBCs.

The vote base of the Samajwadi Party is the Yadav caste, among the largest OBC communities in UP. The BSP commands the support of the Jatavas and some other Dalit communities. So, this gathbandhan is going to forge an alliance of two kinds of vote banks, which will certainly influence the result of the 2019 election.

It will also give birth to a new kind of ‘multi-caste’ political cadre, which will be helpful in mobilising people across castes to register their vote at the booth level.

Also, the energy and the hope generated by a new kind of political tie-up will provide a boost to non-BJP political formations in other states as well.

However, some of these very advantages can work as pitfalls.

The first challenge for the SP-BSP leadership would be to develop a good chemistry between the cadre of the two parties — which have been working against each other for the past three decades. The SP and BSP have been traditional rivals — cadres could find it hard to work together now. (Photo: Wikimedia Commons/PTI)

The second challenge is bringing two social blocks — Dalits and OBCs — together in a milieu where they clash over competing economic and social interests. In the recent decades, OBCs have emerged as landed communities in rural areas of Uttar Pradesh, and Dalits work as labourers on their fields — leading to obvious friction.

Also, due to various development schemes launched by the government, a section of Dalits is becoming assertive in rural areas, leading to further conflict with the dominant castes.

The third challenge for this gathbandhan would be to manage miffed leaders who will not get tickets because of the alliance.

But the biggest problem for this gathbandhan could be the Congress forming a third block.

The Congress could do this with small parties, like Keshav Dev Maurya’s Mahan Dal, Shiv Pal Yadav’s Pragatishil Samajwadi Party(Lohiya) and Om Prakash Rajbhar’s Suheldeo Bharatiya Samaj Party — which is perennially annoyed with the BJP. The Congress could emerge as the first choice for Muslims, and a section of Brahmins plus Dalits. (Photo: Reuters/file)

If this third block succeeds in attracting a section of Muslim, Brahmin and Dalit votes, the gathbandhan could run into difficulties.

It is true that Muslims choose strategic voting in elections, but one can clearly observe their attraction towards the Congress as the only party that may replace the BJP at the centre. A section of Brahmins in Uttar Pradesh, unhappy with the BJP, could go with the Congress. A section of Dalits too feels comfortable with the ‘grand old party’.

For the BJP, thus, the best-case scenario would be this Congress-led third block eating into the votes of the SP-BSP combine.

Another weapon in the BJP’s arsenal would be trying to paint the gathbandhan as an alliance of ‘Muslim-appeasing parties’ — thereby rallying Hindu votes in its favour. BJP President Amit Shah has already been talking of a ‘samagra Hindutva’ to counter caste politics.

The possibilities, thus, are endless. Only time will provide the final answer.

Post your comment
#BJP, #Congress, #BSP, #Samajwadi Party
The views and opinions expressed in this article are those of the authors and do not necessarily reflect the official policy or position of DailyO.in or the India Today Group. The writers are solely responsible for any claims arising out of the contents of this article.