Budget 2019: How Narendra Modi has infused fresh life into his re-election bid

With major announcements for the poor, farmers, workers and the middle class, the government wants an image makeover. How could this Budget impact its political fortunes, as well as those of the Opposition?

Nothing influences voters more than sops — something not lost on the Narendra Modi-led NDA government, especially in an election year.

In what is being seen as the Modi government's re-election bid budget, Goyal tried to cater to all major political constituencies.

Under constant attack from the Opposition over agrarian distress, the government announced a farm income support scheme, 'Kisan Samman Nidhi', for marginal farmers at Rs 6,000 per annum. The scheme is set to benefit 12 crore marginal farmers, with less than 2 hectares of landholding. Along with Rs 75,000 crore for the scheme, Goyal also announced Rs 6,00,00 crore for MGNREGA.

Under the scheme, these benefits would be transferred directly into the bank accounts of beneficiaries.

With the recent electoral losses in the Hindi heartland, the ruling party fully understands the repercussions of farm distress on the upcoming Lok Sabha elections. The lead opposition, the Congress, already announcing and implementing farm loan waivers in the states it recently won, has further raised concern in the ruling party's ranks. With recent losses in the Hindi heartland, the BJP understands the repercussions of farm distress on the upcoming Lok Sabha elections. (Photo: India Today)

Another major announcement was the launch of a social security pension scheme, the 'Pradhan Mantri Shram Yogi Mandhan', for workers in the unorganised sector. Under the proposed scheme, Rs 3000 pension would be provided to workers above 60 years of age. To avail the scheme, the workers will have to contribute Rs 100 per month.

The scheme is set to benefit 10 crore workers and will go down well with the lower income groups, a section that forms a substantial portion of the voting block and could strongly impact the electoral outcome. 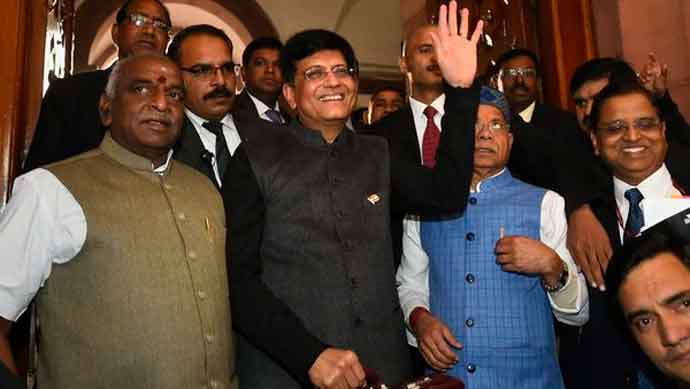 In what is being seen as the BJP's re-election bid budget, Piyush Goyal tried to cater to all major constituencies. (Photo: PTI)

Out of the total working force of 500 million, about 90 per cent are in the unorganised sector. While those earning 15,000 or above are covered under the Employees' Provident Fund Organisation or the Employees' State Insurance Corporation, this scheme will benefit those earning a monthly salary of less than Rs 15,000.

Along with the recently announced 10 per cent quota for the economically weaker section (EWS), these moves could prove to be game changers for the BJP.

But with Congress President Rahul Gandhi's recent proposal of a Minimum Income Guarantee (MIG), the final impact on voters is too early to call.

The Finance Minister saved the best for last though and announced major relief to the middle class — one of the BJP's major vote bank traditionally.

In a move set to positively impact the ruling party's poll prospects, the government proposed that individuals with an income upto 5 lakhs will not have to pay any income tax for financial year 2019-20. The FM saved the best for last and announced major relief to the middle class — one of its strongest vote banks. (Photo: India Today)

With unemployment reportedly at a 45-year high of 6.1 per cent, Modi would want to assuage the middle class.

Barely months to go before the polls, the tax relief could prove to be a game changer for Narendra Modi's re election bid.

Not only will it get the ruling party votes, it will also dull the opposition's charge of Modi representing a 'suit boot ki sarkar'.

Having won the election on a development promise and based upon his own humble image, Modi knows the significance of optics. Mere jibes and slogans can catch the voter's fancy and swing political fortunes. But faced with an aggressive Opposition and a resurgent Rahul Gandhi-led Congress, the ruling BJP knows this Budget is its last opportunity to reach out to the voters.

Having failed to deliver on its long-standing promise of building the Ram Mandir in Ayodhya, the BJP is also facing the ire of its right-wing support base.

The only way out of the mess is to hit where it impacts the most. Your purse strings.

With markets and voters already reacting positively to the Budget, not only will this make it difficult for the Opposition to target the Modi government, the prospects of electoral gains may also push some Opposition parties back into the NDA's camp.

With major announcements for the poor, farmers, workers and the middle class, the government wants an image makeover.

Being pushed onto the back foot by Rahul Gandhi over allegations of crony capitalism and benefiting big business, Modi would want to re connect with his core vote bank.

After all, it is these sections of voters that stand for hours in queues and decide who their next Pradhan Sevak would be.