The Modi government has surprised all by eschewing temptations for any over-the-top populism. The Budget has instead shown a confident sarkaar, sure of its values and its direction.

Narendra Modi has earned a reputation for 'Jumlas'. But a defining feature of all the five Budgets presented during his term has been consistency and fiscal sobriety. Thus, when people were expecting #Budget2019 to be a final “helicopter shot” from the captain in the slog overs of the match, he's surprised all by eschewing the temptation for any over-the-top populism.

Many will jump at me, pointing to the tax exemptions and farmer sops. But let me ask them to take a pause and think what a #RahulGandhi “pre-election Budget” could have been.

Going by the “There is no tomorrow” kind of “pre-election” promises he makes, including the latest hare-brained Minimum Basic Income proposal that many have hailed as a pre-emptive surgical strike, he would have probably gone for broke in a similar situation.

First of all, Piyush Goyal’s Budget speech did not sound at all like that of a finance minister on the backfoot. He may have had to present this Budget, filling in the leave vacancy of Arun Jaitley — but it was easy to imagine Piyush as the next finance minister if the BJP returns to power. Piyush Goyal’s Budget speech did not sound at all like that of a finance minister on the backfoot. (Photo: PTI)

Of late, Goyal has not been his usual unflappable self. Perhaps the pressure of handling three ministries may have been telling on him. But I am sure his industrialist friends would have noticed that he had very easily slipped into the finance minister’s bandhgala suit and his signature smile was back in place.

Secondly, the finance minister was not at all apologetic about any of his government’s actions on the economic front over the past five years. Modi and Jaitley were playing to a well charted-out strategy blueprint and stayed the course even under severe pressure. Therefore, it is only fair that they got a chance to present their report card squarely.

Those willing to keep aside deep biases for a bit cannot but give the Modi government a better than average score on the management of the economy, if these five years are taken as a block.

Controlling inflation was, perhaps, the topmost priority of the government.

Economists may argue how a tight leash on prices of essential commodities can hurt farmers. The BJP has learnt its lesson with onion prices. So, it was a case of once bitten, twice shy. Thus, even its worst critics cannot fault the Modi Sarkar on keeping prices in check. Piyush Goyal did not let go of the chance to rub it in by quoting Manmohan Singh on the performance of UPA-2 on tackling inflation. Weathering the storm: The Modi-Jaitley duo should get a lot of credit. (Photo: PTI)

The then-Prime Minister admitted as much when he said, “We have also not been as successful in controlling persistent inflation as we would have wished. This is primarily because food inflation has increased.”

Undoubtedly, managing the fiscal deficit was one of Arun Jaitley’s most notable achievements, for which he should be remembered for posterity.

But the toughest balancing act was handling the NPA mess it inherited through restructuring and seeing through the Insolvency and Bankruptcy code.

The Modi-Jaitley duo should also get credit for pushing through difficult legislations like the Benami Transactions Act and the Fugitive Economic Offenders Act that would go a great way towards cleaning up the economy in the long run.

But the Modi government played its smartest game below the radar. That was to increase the tax base. No matter what the economic merits or the lack of it with demonetisation and the initial floundering on GST, both of these clubbed together with Aadhaar caused a tectonic shift in the “black” economy, pushing large chunks of it above the water, where it was now clearly visible to the tax man.

Therefore, it was only fair that the finance minister has ploughed back a part of it to the common citizen as a thank you note in the form of tax reliefs.

More than the absolute quantum of the benefit, the acknowledgment itself should go down well with the middle class who were beginning to feel jilted and “taken for granted”.

Whosoever designed the tax proposals applied a lot of thought in deciding the distribution of the candies. While taxpayers at the lower slabs would be happy at the raising of the base, the capital gains roll-over and exemption of notional rent for the second self-occupied house will please the more well-off.

However, both these concessions were measured and none can accuse Piyush Goyal of profligacy. In contrast, in its anxiety to pre-empt the BJP on the rumoured “Minimum Basic Income Scheme”, the Congress fired a premature salvo that will now get lost in space.

This must have been a moment of anti-climax for the opposition.

On the agricultural front, the PM-KISAN scheme, applicable retrospectively since September 2018, will take the immediate sting out of accusations over the Modi government being insensitive to the cause of small and marginal farmers. But, having done so, the finance minister did not forget to mention that the government was not withdrawing support on MGNREGA and other on-going welfare schemes — lest the Congress tries to make political capital out of it. 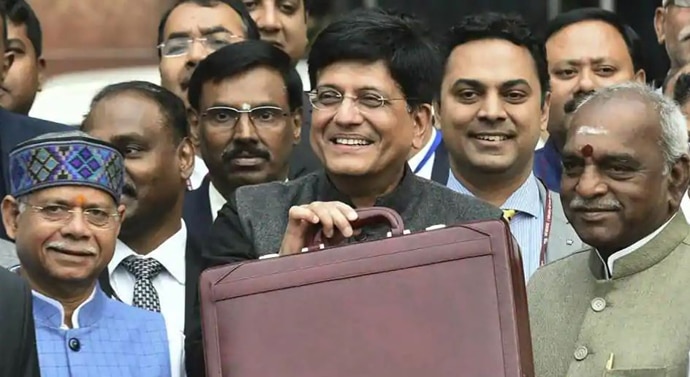 Piyush Goyal checked all the right boxes, including defence — and, not to be missed, cows. (Photo: PTI)

Other than the above, Piyush Goyal checked all the right boxes — including defence and, not to be missed, cows. Tax-free gratuity limits have been doubled and a pension scheme for the unorganised sector has also been introduced.

The new GST compounding scheme is going to bring some relief to small traders, and if GST rates for home-buyers are reduced, it would be a boost for the real estate sector. The problem of high inventory being carried by builders has also been addressed, by extending the notional rent tax-free period by a year.

So, is it a game-changing budget?

Certainly not — and thankfully so. Anything more extravagant would have indicated the government is panic-stricken. Instead, Narendra Modi and his team have shown great wisdom by articulating their vision for the next decade and spelling out the Fiscal Plan for 2019-20 in very specific terms.

Seen in the backdrop of how it has played with a straight bat in the last five years, the Budget should send out a strong signal to all internal and external stakeholders that this government is sure of itself and knows where it wants to go.

That might be very reassuring for voters and investors alike if they compare this with the prospects of a rag-tag coalition of disparate ideologies, competing ambitions and conflicting agendas.

So, a big shout out for Narendra Modi and Piyush Goyal for a very sensible, no-jumla budget.

#Arun Jaitley, #Piyush Goyal, #BJP, #Narendra Modi
The views and opinions expressed in this article are those of the authors and do not necessarily reflect the official policy or position of DailyO.in or the India Today Group. The writers are solely responsible for any claims arising out of the contents of this article.