There has been absolutely no progress in striving to reach a political solution acceptable to all the stakeholders in the Valley.

In a grotesque turn of events, over a dozen lives have been lost and 200 people have been injured, including about 100 police personnel, in violent protests sparked by the killing of Burhan Wani and two other terrorists belonging to the Hizbul Mujahideen (HM) in an encounter with the security forces in Kashmir Valley.

Wani, described as the poster boy of new-age terrorism in Kashmir, lured many youth to join the shrinking ranks of the local militants with his charismatic appeals on social media.

Given the spontaneous eruption of a wave comprising a mixture of sympathy and anger and the unprecedented turnout for his funeral, perhaps there is a grain of truth in Omar Abdullah’s statement that Wani will recruit more young people to join the "cause" from his grave than he succeeded in doing while he was alive.

In the third decade of a violent militancy in Jammu and Kashmir (J&K), centred mostly in the Kashmir Valley, what then is the cause?

In a small minority, it is a misplaced yearning for Azadi driven by a sense of alienation from the national mainstream. The root causes are not much different from any other people’s movement: poor governance, particularly deficiencies in the delivery of justice; inadequate socio-economic development and the consequent lack of employment opportunities; and the inconvenience caused by the heavy presence of the security forces and a false perception that they follow a high-handed approach in their dealings with the people.

The security environment has improved considerably over the last decade.

The road arteries are open to civilian and military traffic; schools, colleges and hospitals are functioning normally; trade and commerce have begun to gradually look up; development projects of the government are slowly gathering momentum; tourists are visiting Kashmir in droves; the annual Amarnath Yatra is attracting ever more pilgrims; and political leaders are able to freely address small crowds at street corners.

Elections are being held regularly and a coalition government is in place, though it is a dubious coalition.

The army’s three-tier deployment and vigorous patrolling, backed by modern night vision devices, has ensured that infiltration from across the LoC has been reduced to a trickle.

The number of incidents of violence has gradually come down.

This summer a large number of terrorists from LeT and JeM, terrorist organisations sponsored by the Pakistan army and the ISI – together comprising the "deep state" – have been neutralised in encounters with the army, the central armed police forces (CAPFs) and the J&K police. 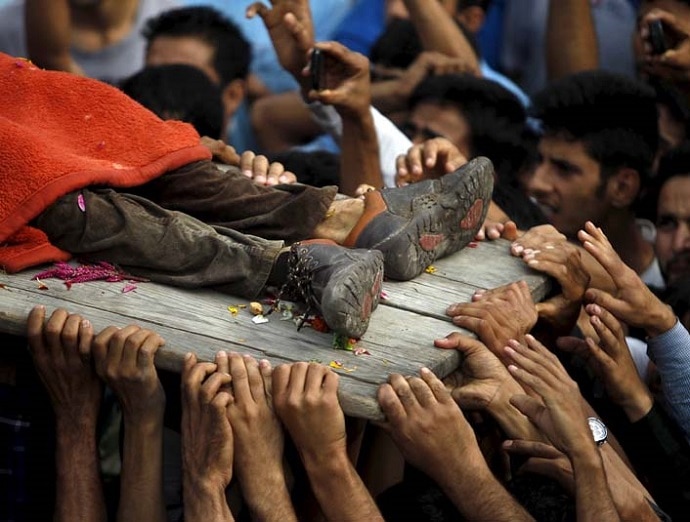 Perhaps there is a grain of truth in Omar Abdullah’s statement that Wani will recruit more young people from his grave than he succeeded in doing while he was alive.

However, no insurgency anywhere in the world has ever been resolved by the security forces alone.

There has been absolutely no progress in striving to reach a political solution acceptable to all the stakeholders, including the people of all the regions of J&K, the displaced Kashmiri Pandits who have become refugees in their own land, and the people of the nation at large.

There is a view in India that the Kashmiri people are a pampered lot, that disproportionately large amounts of central government funds have been pumped into the state and that the people should be grateful rather than agitating for azadi.

They forget that strong arm tactics do not work when stone-pelting crowds take to the streets in the thousands and refuse to buckle under pressure in this mega-media age.

International examples of the power of the people are worth recounting.

In February 1986, the Filipino people restored democracy through the People Power Revolution.

The citizens of Czechoslovakia shook off totalitarian communist rule in the Velvet Revolution.

The victory of the Ukrainian people’s Orange Revolution represented a new landmark in the history of people’s movements for democracy.

The Cedar Revolution in April 2005 ended the Syrian military occupation of Lebanon after 30 years.

The Arab Spring that began with the Tunisian Revolution in December 2010 snowballed into insurgencies in Libya, Syria and Yemen and civil uprisings in Bahrain, Egypt and Iraq and minor sympathetic unrest in many other Arab countries.

Closer home, the Nepalese revolution that dethroned the King is the latest manifestation of the power of the people.

While some of the Kashmiri protesters are no doubt being paid to shout slogans demanding azadi and hurl stones at the security forces, most of them are genuinely concerned about their future and the inability of successive governments to resolve the socio-economic challenges facing the state.

The successful resolution of insurgencies requires a four-pronged approach: governance, development and security, along with perception management.

There can be no doubt that a sustained and convincing high-level political initiative is needed, but what do the people want?

Except for a very small minority that has been deeply influenced by radical extremism, the Kashmiri people do not wish to either join Pakistan or opt for independence from India.

Creeping Talibanisation in Pakistan goes against the grain of Kashmiriyat and Kashmir’s Sufi culture.

After very hard and acrimonious bargaining they will ultimately settle for a large measure of autonomy, which will allow them the right to rule themselves, within the Indian Union.

They will accept that the central government continues to deal with defence, foreign affairs, currency and communications while the J&K Assembly is left free to legislate on everything else. Surely that is not too much to concede.

Autonomy in governance is the central pillar of India’s federal structure.

The late Prime Minister Narsimha Rao had said the “sky is the limit” for autonomy.

When asked whether he was proposing to hold talks within the framework of the Constitution, former Prime Minister Atal Behari Vajpayee had said he was willing to honour the tenets of insaniyat and hold talks within a “humanitarian framework”.

Prime Minister Manmohan Singh had expressed his anguish over the rising tide of violence and had spoken feelingly about the people’s “dard aur mayusi”. He had made a pitch for “mutual tolerance, understanding and accommodation”.

The challenge posed by the prolonged turmoil in Kashmir Valley must not be neglected any further.

The NDA government must hold all-party talks to evolve a national consensus on resolving the problems posed by the unremitting tide of militancy.

Chief Minister Mehbooba Mufti and the leaders of all political parties in the state must rise to the occasion and provide the healing touch that the situation requires.

As for the security forces, they must be allowed to conduct their counter-insurgency operations against Pakistan-sponsored terrorists in accordance with the well-established rules of engagement, but must do so with a sense of utmost restraint, even as they devote time and effort to winning hearts and minds.

Peace and stability in J&K are vital national interests, which can be neglected only with dire consequences to the unity and the integrity of India.

#Kashmir Militancy, #Jammu and Kashmir, #Burhan Wani
The views and opinions expressed in this article are those of the authors and do not necessarily reflect the official policy or position of DailyO.in or the India Today Group. The writers are solely responsible for any claims arising out of the contents of this article.