Homecoming of Pandits in Kashmir's new age of militancy

In his latest video message released on June 7, Hizb-ul-Mujahideen's 21-year old commander in south Kashmir, Burhan Muzaffar Wani, talked about four things in particular - which included the government's proposal to construct Sainik colonies for former soldiers and the settin up of "transit accommodation" for Kashmiri Pandits who were forced to migrate from the Valley in 1990. 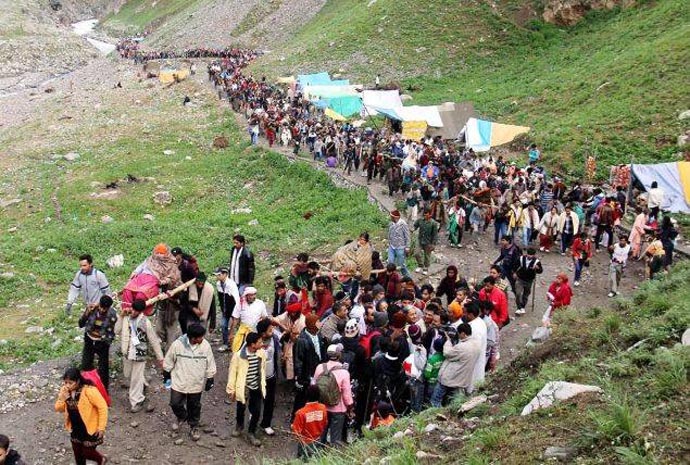 Burhan welcomed the homecoming of Pandits and cautioned the government against constructing 'composite townships'.

Besides this, the Hizb commander warned the Jammu and Kashmir police of more attacks. He ensured a safe Amarnath Yatra.

Importantly though, Burhan welcomed the homecoming of Pandits and cautioned the government against constructing "composite townships" for migrant Hindus and separate colonies for former soldiers.

"The Hindus of this place, who reside outside, they can come to their homes to stay here. If they stay at places where they have their homes, their land, they will find us as their guards...But these Israeli-type colonies, this is an Indian conspiracy against us. We will act against them [separate Pandit colonies]," Burhan said in a six-minute video message, which went viral.

"Don't harass youth or erect check posts on roads…India is our real enemy and it wants to pit us against each other…I advise you to turn the barrel of your guns and join the movement for Kashmir's freedom…," he said.

Burhan, who has now emerged as a poster boy for Kashmir's new age militancy, said that his group had no plans to attack the holy Amarnath Yatra.

"Recently a BSF officer has said that we are planning to attack the Amarnath Yatra. This is a lie…We have no plans to attack. We will not attack [the Amarnath Yatra]. They come here to perform some religious rituals and we are not against them," he said.

After Burhan's video message and attacks on local policemen in south Kashmir and Srinagar some Indian television channels began conducting debates on renewed militancy in the Valley.

What is Kashmir's new-age militancy all about? Why are Kashmir's young boys picking up guns, again?

And do most of them really belong to prosperous families? Are all of them educated as goes the common perception? And, above all, is this the appropriate way to frame questions in the first place?

Historically speaking, even in the early 1990s when the popular anti-India armed rebellion broke out in Kashmir, the local gun-wielding youth came from different backgrounds - some of them highly educated and from affluent households. They represented various socio-economic statuses.

Militants were from the lower middle-class, middle-class, upper class and elite families. Some militant commanders and ideologues of the "armed revolution" even wrote weekly columns for newspapers to articulate their pro-Azadi and pro-Pakistan viewpoints.

Has anything changed since then?

It is inapt to say that the new age militancy in Kashmir is different from the past in terms of historicity and context.

According to government figures, there are about 145 active militants in the entire Jammu & Kashmir, most of them locals and from south Kashmir districts.

Now, the big question: Why are these boys taking up arms?

One of the main reasons is that some of them do firmly believe that they can alter the status quo in Kashmir by their indigenous guerrilla movement.

It is the anger of the dispossessed and expression of a sentiment by the disempowered youths who feel strangulated in absence of any forward movement on Kashmir.

In absence of any serious and meaningful political engagement from New Delhi with the two factions of the All Parties Hurriyat Conference (APHC) and Jammu and Kashmir Liberation Front (JKLF) vis-à-vis Kashmir's political question, some young boys feel suffocated and choked in an environment where spaces for dissent are constricted like never before despite the ruling People's Democratic Party's so-called philosophy of "battle of ideas".

They perceive that New Delhi is indulging in "politics of invasion" by conducting a series of yatras (pilgrimages) to make Kashmir a "holy place for Hindus", and other anti-Kashmir policies like construction of composite townships for migrant Kashmiri Pandits and separate colonies for ex-soldiers, et al.

They feel that "Kashmiri Nationalism" is under severe attack. That Kashmir is facing an "identity crisis". And that Kashmir's Muslim identity is under threat with the PDP-BJP coalition government in power.

Moreover, there are cases wherein the boys have picked up the gun while drawing inspiration from religion Islam, assessing that the battle is essentially between "Hindu India versus Muslim Kashmir".

Also, another context is the continued police atrocities and human rights abuses at the hands of Indian army, paramilitary forces and other government forces and agencies in every nook and cranny of the Kashmir Valley.

In 1996, the people of Kashmir by and large boycotted the assembly elections, but there has been a gradual increase in the voter turnout since the 2002 assembly elections despite the boycott calls given by the pro-Azaadi and pro-Pakistan camps active in Jammu and Kashmir.

Successive state governments in Jammu and Kashmir have been interpreting this "huge participation" of the people in 2002, 2008 and 2014 assembly elections as a "victory of democracy" and "defeat of separatists".

If this interpretation were true, it should have automatically encouraged spaces for dissent in Kashmir. That's not the case. Why?

Paradoxically, the spaces for dissent have been choked like never before, which busts the government's claim that "huge participation of people in the elections means victory for democracy".

Two, the pro-Azaadi leadership is mostly put under house arrest and various leaders detained and arrested every now and then. Even the Srinagar-based head priest Mirwaiz Umar Farooq is sometimes barred from addressing mandatory Friday congregations at Srinagar's historic Jama Masjid.

Similarly, the veteran pro-Pakistan leader Syed Ali Shah Geelani is permanently kept under house arrest while the JKLF chief Yasin Malik is being selectively targeted for appearing as the "lone face of the resistance on Kashmir's streets".

Nearly three-decade old charges were drummed up against Malik, Geelani and Nayeem Khan. However, a local court later granted bail to Malik in the old case.

Three, if participation in local elections meant "defeat of separatists" or "separatist ideology", how does one reconcile with the fact that despite more than 60 per cent voter turnout in the last three Assembly elections, people in thousands participate in a slain militant's funeral?

After all, the Assembly elections in Kashmir are not fought on the premise that it is a "choice between India and Independence" for a voter.

During their election campaign, all the pro-India politicians go before the public saying that their vote is for "bijli, sarak aur paani" (electricity, roads and clean drinking water) and that the external dimensions of Kashmir's political question shall be separately addressed at the India-Pakistan level.

That said, Burhan's father Muzaffar Wani, who works as a principal at a government school, told this writer at his home in Tral that his son would take bath twice during the day; use gel to maintain the style of his hairdo, and wouldn't eat if there was no mutton or chicken dish on offer.

"Burhan was not even regular with his prayers," he told me. Burhan was only 16 when he joined the Hizb ranks in 2010. The context was different. His brother Khalid Wani was allegedly humiliated, abused and beaten to the pulp by soldiers of J&K police's special operations group in Tral.

Burhan, his brother Khalid and their common friend were on a motorcycle when they were stopped at a naka by SOG personnel and asked to buy cigarettes for them. Later Khalid was allegedly ruthlessly beaten. On seeing the condition of his brother, Burhan is supposed to have said then: "Now, I'll not leave you."

#Burhan Wani, #Kashmir Militancy, #Jammu and Kashmir
The views and opinions expressed in this article are those of the authors and do not necessarily reflect the official policy or position of DailyO.in or the India Today Group. The writers are solely responsible for any claims arising out of the contents of this article.