How the CAA movement has shaken the establishment

The Modi-Shah combine is handling the CAA movement with a rigid unflinching strategy to not give in when good sense should have prevailed.

The political description of politician and later Prime Minister Margaret Thatcher was that ‘the lady was not for turning’ honouring her colloquial title as the Iron Lady. Eventually it was the stubbornness went into her head and she had to leave the post at the instance of her colleagues.

That decline is well told in a film where Meryl Streep plays the lead. In this there is a message for this government in relation to the Citizenship (Amendment) Act 2019.

The Thatcherite policy was also muscular, seeking kudos for the battle over the tiny Falklands War off the coast of Argentina. She too turned to the right by selling off capital assets and privatising government companies. In this she tangoed with President Reagan and all but destroyed unionised labour and services. Her obstinacy strengthened her allure but also became the cause of her fall. If the example is compelling, so is her story. I lived through those years in England with distaste, anxious to return to India having lived there for over two decades.

The parallel between the Thatcher years and the handling of the CAA by the Modi-Shah combine has one thing in common: a rigid unflinching strategy not to give in or compromise when good sense should have prevailed. Apart from subaltern protests and armed resistance, the CAA is the third greatest movement that shook the post-independence throne of India’s rulers.

The JP movement which led to the Emergency shook Mrs. Gandhi. The second was the Anna movement which got a ‘sense of Parliament resolution’ faced with crowds and protests, putting the Government and Opposition to shuffle back. But, alas, the follow through of the Lokpal Bill which was the proposed solution turned out to be an untidy disaster. I have documented this in my volumes The Lokpal Idea (l963-2010) and Anna and the Lokpal Bill (2010-2018). Such analysis and recall is necessary to remind us of the power of the people.

The third movement is the present CAA movement which has shaken India and its reputation within and without borders. What could the BJP-led NDA movement have done? It is important to recall that the present government had passed rules under the Foreigners and Citizenship statutes in 2015-17 in their first reign which would not have passed constitutional muster on their own. The CAA was accelerated through given government majorities riding on an earlier Committee Report with dissents. But when the protests started the CAA of 2019 still had to be notified.

This was the chance that Modi-Shah could’ve taken advantage of to quell the protests. Recall that in the Anna movement, the Congress-led UPA immediately started negotiations at the highest level with leaders including former Supreme Court judge, Santosh Hegde and successful Lokayukta in Karnataka to a level of exposure and action which defies all parallels which other Lokayuktas were unable to reach any levels of inefficiency and inspiration leading to their denouement. 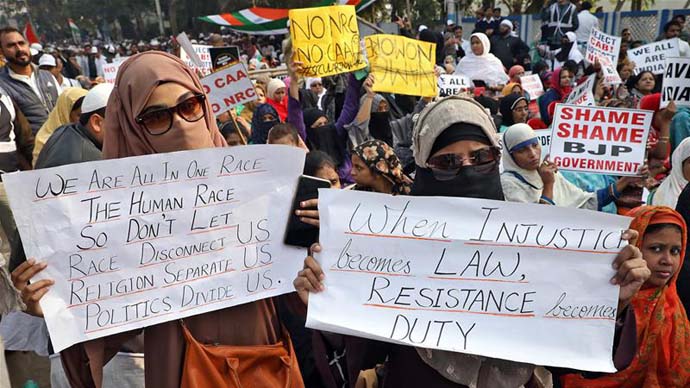 Apart from subaltern protests and armed resistance, the CAA is the third greatest movement that shook the post-independence throne of India’s rulers. (Photo: Reuters)

So under CAA the BJP had an option not to bring the enactment into effect after it was passed and left it to the government to make it operative. When the Assam lawyers asked for a stay it was opposed both by the Attorney General (AG) Venugopal and Solicitor General (SG) Tushar Mehta on the ground that there was a presumption of validity of an Act passed by Parliament. But that was hardly the point because Parliament had left it to government to decide when to bring CAA in effect. In fact, it is important to note that even a post-Emergency Constitutional Amendment of 1978-9 on preventive detention has still not been brought into effect.

This is true of amendments to the Industrial Disputes Act. Indeed in AK Roy’s case (1982), the Supreme Court declared that it could not order bringing the statutes into effect. This applied to the CAA in abundant measure.

This meant that the present government could have told the protestors and the State governments and Assemblies that the Act CAA will not be brought into effect. This would have created a situation whereby the civil liberties secular protestors would be quelled by simply saying that we are not going to make CAA for the time being. This may not have satisfied the protestors who were bonafide and spirited. But it meant that there was room for negotiation, understanding and exchange.

This is something the BJP vanguard was not willing to do. I am not speaking the language of diffusion but discussion so essential to add depth to any democracy. But like Mrs. Thatcher, the BJP was not for turning. Its muscular Hindu, anti-Muslim, anti-secular nationalism was important to profile itself. But there was also another reason. State and panchayat elections were round the corner and it wanted the Hindu plus vote. The message to the BJP is to pull back and not use the army and police.