Even after 70 years of Independence and innumerable social upheavals, there are a number of us who believe that caste has been and is now more than ever before, essentially, a political device. There are those who would bend over back to prove that caste (jati) in its original form (varna) was a wonderful idea of occupational divisions and categorisation of human qualities that was maligned and opportunistically used by the Mughals and the British.

There are still others who push the origins and evolution of caste to a distant past and subsume it today in the contexts of economics and class.

But on a daily basis the disenfranchised fight caste discrimination with no light in sight.

Can we justify discriminatory religious practices on the basis of such "faith"? This is a question that all castes need to ask themselves. And I pose this question as one who has been born into the caste tier that is called "upper". I place greater importance on the upper castes raising this issue for the simple reason that we are "upper". Any tangible change on the top will transform the entire structure. 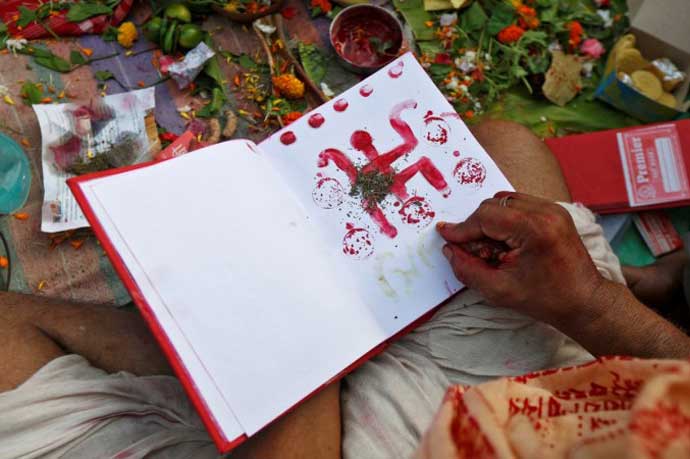 The problem is that caste is the foundation on which ritual communities are built. We should seek to break that by re-designing ritual. Photo: Reuters

But sometimes stupidity emerges from those who want to fight upper-caste hegemonies - a recent example was a protest by the Thanthai Periyar Dravida Kazhagam in Chennai. This group decided to drape pigs with the sacred thread on the day that Brahmins change the thread, a protest that is not just puerile and polarising, but even worse, hurts the caste discourse. The reaction from the Brahmins was also interesting. They used this opportunity to establish the sacred thread as a trans-caste identity. They put out facts of some other caste groups wearing the thread and of priests and astrologers in certain dalit communities using this upper-body embellishment. This argument is what I would call a "self-goal" because it only further confirmed the sacred thread as a ritualistic exclusionary mechanism. The sacred thread is a marker, which without doubt holds its highest position on the torso of the Brahmin, and when other communities adopt or selectively incorporate its use, this aspirational act only establishes brahmins' ritual superiority. Therefore, there are brahmanical castes and there is the brahmanical within castes!

A creative way to address these issues would be to find ways to re-ritualise religious practice. Ritual is an aesthetic body and builds communities. The problem is that caste is the foundation on which ritual communities are built. We should seek to break that by re-designing ritual. Can we curate novel inter-caste ritual practices that dissipate caste identities? I am aware that this suggestion is ridden with problems, but I do feel it is worth exploring. And let me make it clear, I am not promoting caste conversion or appropriation.

For the OBCs, caste is aspirational and the faster they move upward, they feel, the more cultured, appropriately ritualistic and acceptable they become. Stuck in the middle, they feel a greater pressure to move away from those below and consequently physical violence is used ever so often. Caste superiority becomes assertive and honour killing acceptable. In the mix here is reservation, which provides benefits based on caste categories. While caste groups want to move up culturally and economically, they are also looking for more benefits from the government. This requires pushing downwards in the other direction. The political parties formed on caste basis dangle this carrot in order to entice members of the community.

Nevertheless, the undeniable fact is, those at the bottom of the pyramid have nowhere to go. The adivasis and dalits are exploited, trampled upon, remaining captive in their caste. None of us on the higher floors of the caste-skyscraper care to reflect on them. We will shed a tear or two for the death of the manual scavenger who is forced to enter the sewers filled with our excreta. 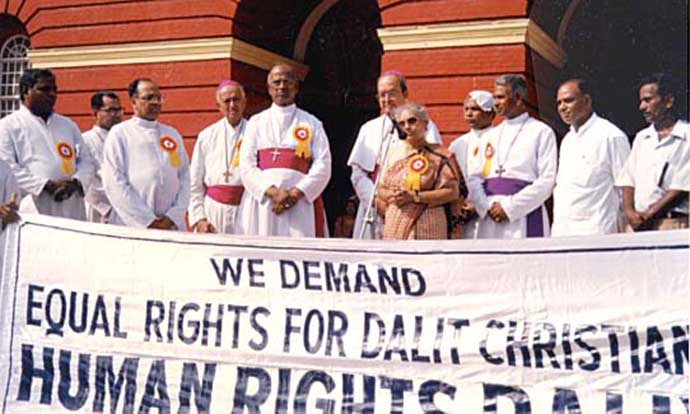 Caste transcends every faith and is ingrained in our social fabric and hence needs to be dethroned from within and beyond faith. Photo: AsiaNews

But when they demand their rights, we treat them with disdain, labelling dalit protesters as politically-motivated party stooges. There is another trap in dalit/adivasi caste mobility. Upliftment of the socially-backward never seeks to create pride in their community and more often than not those who move ahead obliterate their past. This further corners, stigmatises and deprecates the dalit and adivasi identities. How can any community achieve social equality unless their culture and life is held in esteem by society at large?

In this mix are Christian evangelical groups that perpetuate the falsehood that caste disappears with the acceptance of Jesus as the one and only true lord. The truth is exactly the opposite. Churches are separated by caste and all its evils remain alive in a Christian garb. I have even heard from Muslim friends that caste is neither absent nor invisible in Islam. Hindu pontiffs on their part have either ignored these communities or sought to alter their religious practices to mimic the higher castes.

Unfortunately, many of us have reduced the complexity of caste and stuffed it into one little box: reservation. Reservation is not a perfect system and has been used by political parties to further their own market share. But nevertheless it is a necessary and empowering device. There is no doubt that it needs newer non-party political eyes that re-examine its form, address issues of the creamy layer and the problems faced by the upper castes. But reservation has to stay, becoming a robust, constantly evolving system. At the same time, we as a society must confront gender equality, and I refer to all genders. Caste emanates from patriarchy and without destroying that ugliness, it cannot be wished away.

Caste exists everywhere, plays hide-and-seek, empowering a few, destructive to most and impossible to contain. Is there a solution? Like with all human grade-separators, a caste free world is possibly unattainable, but I am certain that caste-sublimating living is achievable.

The closer we get to that frame the more we will listen to each other. It is in this possibility that hope lives.