Why we need to rethink caste-based reservations

Dr Babasaheb Bhimrao Ramji Ambedkar’s 126 birth anniversary on April 14 followed by a talk I was invited to deliver on him in Houston, Texas, gave me the opportunity to revisit his life and works. Babasaheb was an outstanding maker of modern India, but one whom we still tend neither to read nor grapple with intellectually.

One reason for this, paradoxically, is just how deified he is. There are probably more statues of Babasaheb in the world than of any other public or political figure. Recently, there was a proposal to erect a gigantic 350-foot bronze figure of him, called the Statute of Equality, at his proposed memorial in Mumbai, which would be taller than the Statue of Liberty.

In addition to his deification, Babasaheb’s appropriation by all shades of political opinion and all political parties has also come in the way of reading and engaging with him seriously. All politicians vie with each other to extol him, pay their homage to him, garland or glorify him. But hardly anyone really reads what he wrote or wish to follow what he said.

Sadly, this is also true of many Dalit intellectuals, who have made Ambedkarism akin to a cult or a dogma that cannot be questioned. They have thus turned Babasaheb into a new kind of “untouchable” — one who is off bounds or limits. You can only approach him from a distance, after taking your shoes off. 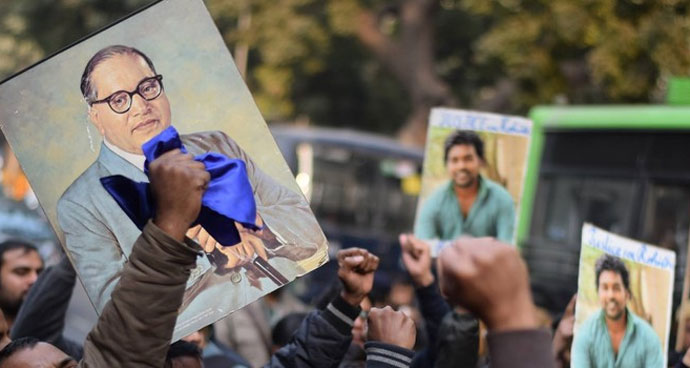 Worship is fine, but to be closely in touch with his work, texts, or life is not encouraged. But would Babasaheb have approved of this? Not if we go by what he says.

In what was arguably his most hard-hitting and well-known book, The Annihilation of Caste, he ends by invoking his teacher at Columbia, the famous American pragmatic philosopher, John Dewey:

“Every society gets encumbered with what is trivial, with dead wood from the past, and with what is positively perverse... As a society becomes more enlightened, it realises that it is responsible not to conserve and transmit the whole of its existing achievements, but only such as make for a better future society.”

Hindu society of the “baneful effects of this worship of the past,” he again quotes Dewey, exhorting us to live not in the past, but in the present: “The present is not just something which comes after the past; much less something produced by it. It is what life is in leaving the past behind it.”

Those who respect Babasaheb might take heed of these words: it is our duty to distinguish Ambedkar from Ambedkarism and Ambedkarites. Unfortunately, the latter have turned him into the "God of Reservations" from a constructive and careful thinker, an economist, constitutionist, and one of our greatest religious and social reformers of modern times.

Describing himself as “a man who has been no tool of power, no flatterer of greatness… almost the whole of whose public exertion has been one continuous struggle for liberty for the poor and for the oppressed”, he exhorts Hindus “to uproot caste, if not in my way, then in your way”.

Having already decided to change his religion, he says, “I am sorry, I will not be with you... But even when I am gone out of your fold, I will watch your movement with active sympathy, and you will have my assistance for what it may be worth. Yours is a national cause.”

If we were to take Babasaheb’s remarks to heart we should ask directly whether caste-based reservations have contributed to the annihilation of caste or its reinforcement. Have such reservations diminished the hold of caste or strengthened caste-consciousness? Have they destroyed varna vyavastha or reinvented a distorted and virulent new version of it?

If the answer to such questions isn’t a simple yes or no, shouldn’t there be a nationwide debate on caste-based reservations, especially in the 70th year of India’s Independence? Furthermore, how can we move forward from this caste-quagmire into which we are stuck?

It seems to me that the first and most obvious move would be to add other criteria to caste when we determine who should benefit from reservations. Economic criteria, for instance, would be the obvious additional determinant of backwardness. This also means that the wealthy among the backward jatis might be excluded from benefits so that the latter more properly go to those who are truly needy and deprived.

Also, as among the OBCs, there could be multiple criteria for determining who would constitute the creamy layer.

Logically speaking, never-ending reservations would only perpetuate, not end, the caste system; they would impose reverse discrimination onto society, morphing into a pernicious version of the very caste system they seek to redress, thus defeating their very purpose. As a nation, shouldn’t we move from a culture of entitlement to a culture of competence? Shouldn’t we recognise, as did Babasaheb, that real respect is only accorded to real capability?

A people to be great require many different kinds proficiency. Shouldn’t we invest in actual capacity building, not merely in cynical politicking? Above all, is it not time we stop this blame-game?

Remember how Babasaheb in a 1917 essay said, “The theory that the Brahmins created the caste... is incorrect in thought and malicious in intent. The Brahmins may have been guilty of many things, and I dare say they were, but the imposing of the caste system on the non-Brahmin population was beyond their mettle.”

Isn’t it time to revisit the reservation policy itself, instead of treating it as sacred dogma?

Also read: How not to honour Babasaheb Ambedkar