The two countries signed nine agreements and also took India's involvement in the Chabahar port a step forward. The most important outcome of the engagement was perhaps the political message that went out to the world this weekend from Delhi. In the current realignment of forces in West Asia, India will not take sides. It will tango with Sunni Saudi Arabia as well as Shia Iran. Israel may hate Iran and work tirelessly to clip Tehran's wings but cannot influence India's stand vis-à-vis the latter.

Prime Minister Narendra Modi and the BJP have always valued Israel and Modi's bonhomie with Benjamin Netanyahu is evident when the two meet, but this does not mean that Delhi will side with Israel at the cost of its interests. In December, India voted against US' move to recognise Jerusalem as the capital of the Jewish state and to shift its embassy from Tel Aviv in the UN General Assembly. India could have simply abstained, but it went ahead to vote in favour of Palestine. Despite this, India continues to enjoy good relations with both US and Israel.

New Delhi's deep diplomatic engagement in West Asia is aimed at ensuring its strategic security and ensuring that its economic concerns are met. All those who felt that Narendra Modi was rushing India into the US orbit were left surprised when Modi extended an invitation to President Rouhani to visit and his recent visit to Palestine. Though Iran is enemy number one for both Tel Aviv and Washington, Delhi is ready to sustain its historical ties with Iran. President Rouhani emphasised: "The relations between the two countries go beyond trade and business, they go back in history.''

The US, under Donald Trump, is ready reconsider the 2015 nuclear pact signed with Iran on Israel's plea, which has repeatedly asserted that the deal was a disaster and must be scraped. Saudi Arabia, which sees itself as the rightful leader of the Muslim world, is concerned about Iran's growing influence in the region. From calling the shots in Iraq, to supporting Bashar al-Assad in Syria and supporting the Sunni factions in Yemen, Tehran is everywhere.

Israel has long lobbied against the 2015 nuclear agreement between Iran with the US, Russia, China, France, the UK and Germany. The landmark agreement, an important milestone for Obama's foreign policy, under which Iran promised to roll back its nuclear weapons programme, was never supported by Trump. He has already refused to certify Iran's compliance to the nuclear agreement and had pushed the matter to the US Congress, where majority of the Republican lawmakers want to impose tough sanctions against Iran.

India, like the rest of the world, continues to support the nuclear deal.

Why Iran is important to India

Apart from energy, India is interested in access to the Chabahar port, which Delhi hopes will allow it to bypass Pakistan to reach Afghanistan and open the way for broader connectivity to Central Asia.Pakistan does not allow Indian goods to transit through its territory if they are meant to be delivered to Afghanistan. 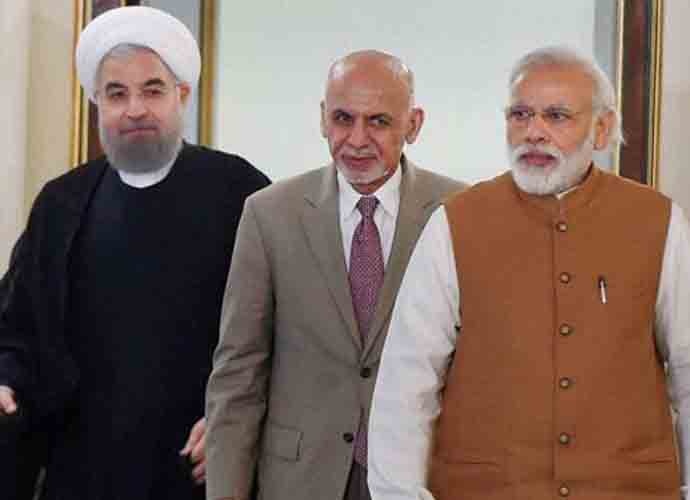 The idea of sending goods through Chabahar is an old one. India has committed $85 million for it, but progress was slow on fears of further sanctions on Iran. But on Saturday the contract for the lease of the Shahid Beheshti Port, a part of the Chabahar project, was signed between an Indian firm, India Ports Global Ltd, and the Iran's Port and Maritime Organisation. The India Ports would take up operation of the existing port for 18 months. Many regard Chabahar as India's answer to China's building and operation of the Gwadar Port in Pakistan's Balochistan province. However, that perhaps is far-fetched as Iran is not Pakistan and unlike China cannot change it into a military dock if required. However, Chabahar can make a major difference to trade and economic activity. India has already sent wheat to Afghanistan using this facility.

After talks with Rouhani on Saturday, Modi said: "We will support the construction of the Chabahar-Zahedan rail link so that Chabahar gateway's potential could be fully utilised."

The Iranian president added that the rail line will be an economic boon for both countries. He also said that both sides "are prepared for joint ventures in gas and petroleum sectors" and sought Indian investments in the industrial and mining sectors.

India and Iran in the past had collaborated in Afghanistan and together with Russia supported the Northern Alliance when the Taliban was in power. The major difference now is that while India welcomes US presence in Afghanistan, Iran is against American troops continuing to remain in that country.

After talks between Modi and Rouhani, nine memorandums of understanding (MoU) were signed, including on avoidance of double taxation, ratification of extradition treaty, expanding trade, traditional medicines and agriculture. MoUs were also signed between trade bodies of the two nations. A provision for investments in rupees has already been made to take care of contingency if dollar payments are stopped because of sanctions.

The fear of sanctions in Rouhani's mind was clear when he devoted his speech at the Observer Research Foundation to the nuclear agreement. He said that Tehran was committed to abide by the 2015 deal and said the US would be making a strategic mistake if it pulled out.