How sand mafia is waging a war in Chambal, endangering wildlife

At the root of this is a surge in demand for sand fuelled by real estate boom.

Forest guard Narendra Kumar Sharma was mowed down by illegal sand miners in Gwalior district (Madhya Pradesh), on March 6, 2016. In a bid to stop the loaded tractor trolley from fleeing, Sharma jumped onto the vehicle. He was kicked and pushed as the perpetrators tried to speed away, when the vehicle swerved, toppled, crushing him underneath.

Illegal sand mining is rampant in the National Chambal Wildlife Sanctuary, which harbours among others, the critically endangered gharial.

You may have read this news item over the weekend and probably clucked sympathetically. Without having the foggiest idea of the link between the brutal end of a forest guard, your apartment building, and one of the most endangered species in the world, the gharial. 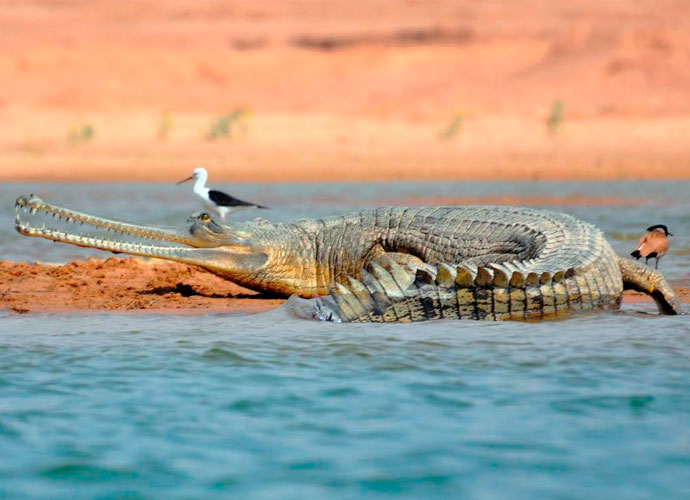 Chambal is home to the critically endangered gharial.

First, some details about the tragedy of Narendra Kumar - and many others like him - who have been killed in an ongoing ruthless war over one of the most coveted natural resources of the 21st century - sand.

Yes, sand. But more on that later.

The deceased, Narendra Kumar, was a "star" member of the team cracking down on illegal sand mining over the past 15 months. In this time, more than 150 trucks of sand have been seized by the Madhya Pradesh Forest Department in a joint operation with the state police.

Narendra's seniors say his courage was boundless. He knew the tricks to crack the trade and had the guts to take on the mafia. He was key to seizing no less than 30 trucks carrying sand.

And now he is gone… killed by sand mafia. He is not the first victim.

The day the forest guard was killed, I was 25km away at the National Chambal Sanctuary - a riverine sanctuary that transcends three states - Rajasthan, Uttar Pradesh and Madhya Pradesh.

The sanctuary was essentially created in 1979 to protect, and revive the gharial, whose population has dwindled by about 98 per cent in the past three decades.

The gharial is a "specialist", a unique crocodilian, which dwells in rivers and thrives on an exclusive diet of fish. It's endemic to the Indian subcontinent, and fewer than 400 adults survive today, the Chambal being its last stronghold.

We could see the gharials basking on sandy banks. Also, on a tongue of sand was a colony of the equally rare Indian skimmers and three of the eight species of turtles found in the river Chambal.

Sandy banks and islands are crucial for all three species - while the turtles and the gharials both bask and nest in the sand, the skimmer is a bird that breeds and nests on the ground, favouring narrow sand islands.

While we do not spot any ongoing mining, tell-tale signs of tractors criss-cross the banks and trucks laden with sand thunder over the bridge beyond. Later, we go over to Deori (Morena District)and chat with the forest officers stationed there. They tell us of the terror of the sand mafia, and the toll it's taking on the men trying to protect Chambal, and its gharials. The previous night, a forest ranger and his team had been attacked and shot as they attempted to stop dumpers ravaging the sand banks. They were fortunate to have escaped alive. A few days before, another forest team along with jawans of the Special Armed Force, deployed to crack the illegal extraction, were ruthlessly assaulted.

Such attacks are routine, and forest chowkis, vehicles have also been attacked, even burnt in the process.

While Morena is a "hotspot" for the illegal sand mining, it is by no means the only one. The war rages across the country. No river is spared - from the holy Ganga to Periyar in India's southern tip, Narmada that flows west to Mahanadi in the east.

The river beds are gouged and stripped bare, and retaliation to those who enforce, regulate, expose or report is ruthless.

One prominent case was of IAS officer Durga Shakti Nagpal's suspension, which was linked to her taking on the sand mining mafia. Perhaps the most horrific incident is of Sandeep Kothari, an MP-based journalist, who reported on illegal sand mining, and had also filed a case in this matter. He was abducted, set ablaze, and his charred body discovered later.

Illegal sand mining is reported to be worth billions of rupees, and the mafia is all-powerful and well-connected. By some estimates, the annual loss government faces from illegal river sand mining is more than Rs 30,000 crore.

There are rules and guidelines regulating sand mining, but these are openly flouted. The Supreme Court in its 2012 order restricted all mining activity in riverbeds without environment clearances.

At the root of this raging war is the surge in demand for sand fuelled by the real estate boom, with rapidly expanding megacities, and for industry and infrastructure: highways, roads, dams, factories etc.

Sand is a key ingredient in making concrete, the mainstay of the construction business, of which India has the largest after China and the USA. The evidence is all around us: apartment and office complexes, malls, flyovers, multiplexes, superhighways.

As India continues to be concretised in its insatiable quest for growth, the demand for sand has skyrocketed. Most of this is met by mining rivers, as the finer, smoother desert sand does not bind well.

There are other uses. Sand is an essential ingredient in the making of computer and silicon chips to cosmetic and solar panels. As per the United States Geological Survey there has been an increase in requirement from 1.3 billion tonnes in 1994 to 3.7 billion tonnes in 2012.

The impact of the surging demand for sand reverberates along India's dying rivers, its price paid by those who try to contain the destruction.

Dredging river beds changes the very physical characteristics and the ecology of the river, which may alter its course, cause erosion, and allow for increasing salinity intrusion. It also destroys livelihood, with agricultural losses due to dust, as well as declining water tables.

Over the years, Chambal's infamy as an "unholy" river, and notorious bandits who ruled the roost, ensured that it remained untouched by rapacious mining and other such damaging activities.

Now, the mafia has moved in to loot the natural resources, and forest officials despair as to how they will control sand mining and protect the most pristine of India's rivers, and its rare wildlife.

They are woefully understaffed, unequipped.

For the 435km stretch of the river sanctuary, Madhya Pradesh has a sanctioned strength of 15 forest guards, while Rajasthan currently makes do with 17. Uttar Pradesh sees a shortage of over 70 per cent. The department has few boats to patrol the river, and no money for its fuel. Actually, there is no money for anything, period.

The Chambal sanctuary, harbouring most critically endangered species, received no funds for the last financial year. The forest department is armed (except for Rajasthan) but these do not match the sophisticated weaponry and the muscle the sand mafia carries.

How long then, will the Chambal run its course? And gharials continue to bask, and flourish, on its sandy shores? How many more men-and women - will be sacrificed in the war over sand?

The answer lies, at least in part, on whether people like us join the dots, and appreciate the real-and-deadly-cost of rapidly expanding urbanisation and growth.

Truth of the matter is, as a recent article in Wired puts it: "The supply of sand that can be mined sustainably is finite. But the demand for it is not."

#Urbanisation, #Wildlife, #Sand Mining
The views and opinions expressed in this article are those of the authors and do not necessarily reflect the official policy or position of DailyO.in or the India Today Group. The writers are solely responsible for any claims arising out of the contents of this article.