Q. The BJP MP from Asansol, Babul Supriyo’s car was vandalised — what’s your view on this?

In West Bengal, we have autocratic rule. They are using the police force as the morcha of the Trinamool Congress (TMC) — apparently they have ‘jihadi bahini’, a group of boys, I've heard, who are trained to kill and attack.

I was attacked on the 24th of this month, I was going with my party workers to the Election Commission office to file my nomination papers. When I was at Hazra crossing, these TMC workers came straight to beat me up. Luckily, I was crossing on an open jeep — if I was on the ground, there would have been a stampede. To file my nomination papers, 6,000 people walked with me — and of that, 3,000 were common people, regular citizens of Kolkata. This is something quite amazing.

When these people attacked, they literally made a circle around my jeep so that they could not approach me. But they were swearing at me — what filthy language they were using. See, ours is a political fight and not personal. There is no personal hatred, I respect Mamata Banerjee, Nandini Mukhopadhyay, the CPI(M) candidate, I have nothing against them. But if their workers hurl abuses at BJP workers and candidates, this is uncalled for.

What happened today confirms that there is absolutely no law and order in the state of West Bengal — there is complete collapse in administration. There is gunda raj.

Babul Supriyo has security, he is a central minister. I have no security. If they kill me though, they will regret it because people of South Kolkata and West Bengal are with me.

Mamata Banerjee is a mass leader. She must control her party men and these goons. They might get aggressive but it is for the leadership to control the party people. How can you let them loose?

Today, my supporters are telling me that they are being threatened, they are saying ‘If you vote for BJP, you will not be allowed to stay in this locality’.

What kind of politics is this?

Q. It is said though that Bengalis don’t care for Hindutva. Given that, how will BJP actually enter there?

It is not a question of Hindutva or Hindus. Of course the majority vote bank in West Bengal are Hindus. But the point is Bengal people are inclusive — and the BJP, under the leadership of Narendra Modi and Amit Shah, personifies ‘Sabke saath, sabka vikas’. That is our mantra. We will protect any community which is under attack. We don’t play one community against the other — that is completely Mamata Banerjee’s politics.

She has done appeasement politics — she tries to appease a certain community to garner votes. If Hindus are attacked by a certain people, don’t you think it is our duty to protect them? But we don’t do the politics of pitting one community against the other.

I hail from Netaji’s family. Netaji united all communities and all religions to fight for India’s independence in ‘Azad Hind Fauj’ — the same idea has been adopted by Narendra Modi today. His ‘sabke saath, sabka vikas’ comes from Subhas Chandra Bose’s ideology.

Netaji united India for freedom — Modi is uniting everyone for ‘vikas’. 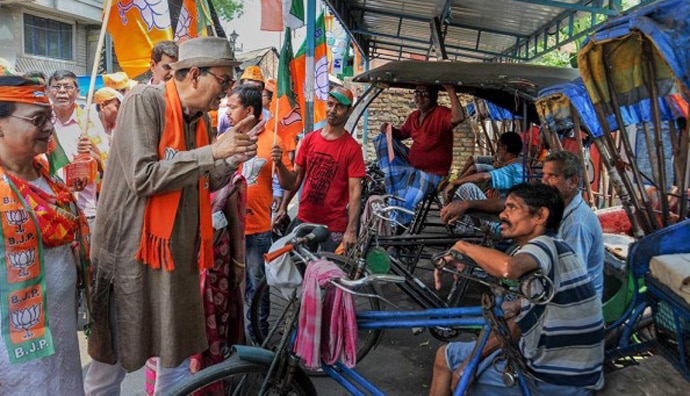 BJP for all: 'We don’t do the politics of pitting one community against the other', says Chandra Kumar Bose. (Source: PTI)

Nothing — statues which are there in West Bengal are damaged, TMC goons attack them. Statues of Shyama Prasad Mukherjee, Swami Vivekanand are not spared. The TMC is a congregation of opportunists who have joined hands to loot the state of West Bengal. I think they have done a good job, as I see it, of stealing the exchequer's money. They have stolen money of common people in chit fund scams.

They have no ideology, no direction, no vision.

Q. Crimes against women are huge in Bengal now. What does that show?

We feel so ashamed — in Bengal, we respect women. That’s how we have grown up. Today, in ‘bastis’, there are no toilets for women, they tie a saree from one tree to the other and that’s how they take a bath. In the 21st century, in the heart of Kolkata, where the chief minister resides, South Kolkata, she has not done nothing for women.

In Gariahat where I live, at 7 in the evening, necklaces and chains are snatched by goons — no action is taken by the police because all of them are associated with the TMC. Women are constantly under threat. If you see the incidents of rape, violence, molestation, we are at the top of the charts in Bengal.

People wanted a change — but change for the better, not for the worse. The criminalisation of politics was started by the Left but Mamata Banerjee has mastered the art of ciminalisation and violence in politics now. 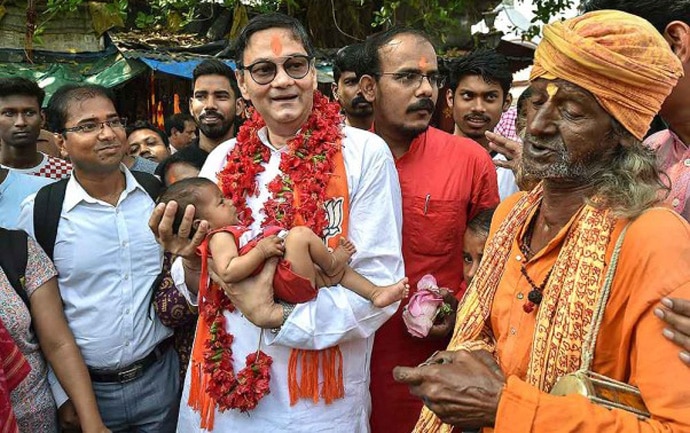 New Tidings? Bose says the BJP will win anything between 20-25 seats in West Bengal this year. (Source: PTI)

Q. Bengal holds the key for Modi to come back to power. TMC had swept in 2014, despite the Modi wave — what's your prediction this year?

In 2014, if there was a Modi wave, it is six times more in Bengal now. It is not a Modi wave but a Modi volcano this time around.

We are fighting 42 seats with all our might — we should get anything between 20-25 seats, provided free and fair elections are held and the Election Commission is more active, they take the responsibility of maintaining law and order. There is no point of having Lok Sabha elections after what happened with Babul Supriyo — we are seeing the same thing which happened during the panchayat polls.

Why hassle people? You can just declare the candidate who is playing the goon factor as the victor.

Q. Do you feel in West Bengal, communal politics plays a tangible role?

Communal politics has been encouraged by Mamata Banerjee — she is very clever when she says that the BJP is communal, but your actions prove whether you are communal or not.

We have no problems with any community, Hindus, Muslim, Skihs and Christians, they all live very happily together in West Bengal. Mamata has learnt the divide and rule policy though — she is a by-product of the Congress, she is the same kind of person like the Congress leadership has.

You cannot have Durga Puja immersion during Muharram — we have always had, we have crossed each other, nothing has happened. But Mamata makes it a big issue — no, no, you cannot have Saraswati puja, development of minority Muslim population has not taken place. By bribing the Imams, you are not going to do any work for the common Muslim on the road — but she is trying to consolidate the minority vote bank.

Don’t you think this is communal politics? Every Bharatiya, Muslim, Sikh, Christians, they all are my brothers and sisters. However, if someone says that ‘Bharat ke tukde honge’ (split India), ‘Pakistan zindabad’, ‘Mini Pakistan zindabad’, we are not going to accept that.

Jihadis are not accepted in West Bengal by the BJP.

We are a political party, we work for development. I would ensure that every community will live peacefully in West Bengal — and there is not going to be any appeasement or partiality towards or against any community. Q. How do you think opposing the CBI on the Sarada chit fund investigation impacted Mamata?

As I see it, she is paranoid as most of the money is apparently all with her people. The way she jumped out of her house and rushed to the former commissioner’s residence — that was un-called for. The police commissioner sat in a dharna with her — this is against the service book of the police.

Mamata Banerjee does not even apparently accept the Constitution of India, she keeps shouting 'federal system' but she doesn’t practice it. She is a mass leader and has struggled but for power, she is willing to do anything. This is not the approach.

Of course — the people who built her party and worked since 1997 onwards when she established this party, they were all driven out because Abhishek had to be given a position. Abhishek has a long way to go, he is a youngster. But people who have contributed towards her party are being sidelined, removed from their position to give way for Abhishek Banerjee. This is dynastic politics — the same model Rahul Gandhi has.

People of Bengal will not accept this. 'Bengal has always been inclusive. But if Hindus are attacked, don't you think it is our duty to protect them?' (Source: PTI)

Congress is confused as far as Bengal is concerned. They are not really a force to reckon with. There are a few leaders who matter like Adip Choudhary but then, he has submitted to the lordship of Rahul Gandhi.

Congress has a legacy. My great uncle, Subhas Chandra Bose, in 1939 was the last elected president of the party. Barring a few years, the Congress president has never been elected. It is selected from within a dynasty.

Congress’ legacy once was democracy — but today, there is no democracy. I am sure that even within the Congress, there is a lot of talent — but they don’t get any scope. In West Bengal, they can’t even decide whether they should join hands with the Left. Sometimes, they say ‘yes’ or ‘no’ — there is no policy, no manifesto, simply nothing.

#Mamata Banerjee, #Babul supriyo, #Chandra kumar bose, #Subhas Chandra Bose
The views and opinions expressed in this article are those of the authors and do not necessarily reflect the official policy or position of DailyO.in or the India Today Group. The writers are solely responsible for any claims arising out of the contents of this article.