Charlie Hebdo has mocked our hypocrisy, not Aylan Kurdi

The French magazine's cartoon underlines the knee-jerk and racist reactions towards Syrian refugees.

It all started with that dead toddler.

This image of the body of a Syrian boy drowned today on a Turkish beach is emblematic of the world's failure in Syria pic.twitter.com/IYiIPgvieG

A "Shocking Arabian Rape Game" which "Has Made It To Europe & It's Beyond Disgusting".

Cologne. Cologne is in Germany. Cologne is the city that saw the "Arabian rape game", like a distorted thousand and one Arabian nights, where women, white European women, were groped and digitally penetrated by marauding macaques of North African, Arabic morphologies.

"Too many Muslim men are misogynists", shouted The Telegraph.

"The Arabic gang-rape 'Taharrush' phenomenon which sees women surrounded by groups of men in crowds and sexually assaulted... and has now spread to Europe." That was the Daily Mail.

We see women, harassed, harrowed women, white women, narrating their tales of trauma. Groped by a brown, Muslim mob. The bloody Oriental Despot who is F$%#'íng also getting our F$%#'ing doles, our taxes given away to entertain these #Rapefugees.

How often does Europe change its mind? From fears about a "Muslim Europe" because surely its "inherent Christianity is under threat" from the refugee ingress, to paranoia (not entirely unjustified) about "jihadi terror attacks" targeting its "sitting duck cities", Paris especially - Europe has seesawed. And the nerve centres of the continent - Paris, London, Berlin - as well as smaller, unmarked upon conurbations such as Cologne, have been the crucibles of sociopolitical experiments.

Experiments borne not of some exclusive Enlightenment values that Euro-America claims to have, but of inevitable consequences of fossil-fuel engineered globalisation and its discontents, the centrifuge of demographies and peoples thrown asunder because of unending wars of territorial control, to supposedly energise an imagined future.

The splintered chorus of bourgeois Europe's collective rage, guilt, shame, hypocrisy, moral high ground and ethical responsibility has been obscuring the real pain and pathos of the global migrant crisis, emanating at present from the killing fields of Syria. It's always, always about Europe/America, and how it creates, lives up to, or fails standards and milestones of being human.

The vast swathes of West Asian battle-infested zones, are therefore, just laboratories of measuring degradation, humiliation and the depths to which human beings can push fellow humans, particularly of a different skin colour or religion.

And if this is all the "known unknowns", if this is the blasé base, the very starting point - this unforgivable knowledge of the chain of predation, orchestrated and monetised suffering - then how, just how, can a reconnaissance, a change of heart and change of guard take place?

If everyone is already aware of the Syrian death camps, where shards rain from the skies as the ground becomes a mine maze, and if despite that, all it takes is one night of rampant sexual criminality from the Muslim male to brand millions of asylum-seekers as rapists and molesters, backstabbing Europe by taking its women (the ultimate sanctum sanctorum in any conflict is the female body and claims over it), then how does one describe, comment upon, warn against and criticise it?

What propriety in the face of mutual animosity? What culture? What civilisation? 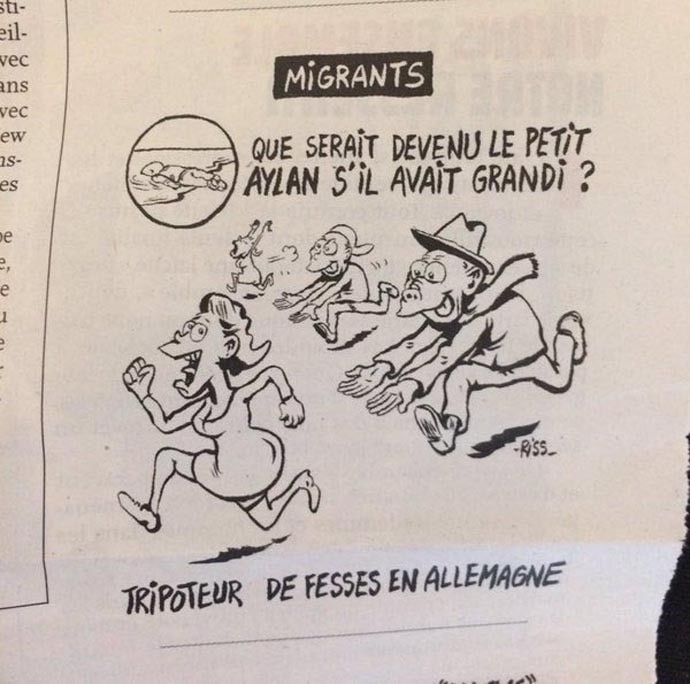 Charlie Hebdo on the Cologne incident.

The thing is that barely one year since this tiny French satirical magazine faced the most gruesome attack not just on its people, the uber talented Charb and his team of intrepid cartoonists, Charlie Hebdo had the vintage gumption to hold up a mirror to Europe's face. And that mirror did not sugarcoat the bitter truth.

In fact, Charlie Hebdo's latest cartoon frontpaged the ugly, racist voice within Europe's gut: "What would have little Aylan Kurdi grown up to be? Ass groper in Germany".

Did Charlie Hebdo caricature the "pig-faced" Muslim "rapefugees" (considering their religious proscription on pork) and present them, without an iota of self-doubt or irony, as the logical and golden career choice for that dead toddler Aylan Kurdi had he lived? Did Charlie Hebdo make grotesque fun of baby Aylan, whose death made him a superstar of pain, a posterboy of unbelievable tragedy, thereby affording him some "dignity in death"?

Charlie Hebdo mocking Aylan, the child that drowned. Where are all you "Je Suis Charlie"s at now? Disgusting. pic.twitter.com/zdJEOr397o

Or did Charlie Hebdo say what Europe has been toying with, exposing its hardly hidden biases against the incoming Muslims, by "using" baby Aylan Kurdi, who has been mummified as the last reservoir of a civilised response to unspeakable tragedy?

Charlie Hebdo's instrument of expression - the satire - is a double-edged sword. It has bled the magazine itself, literally, while making impacts so gigantic and explosive that the world has been forced to come to terms with and acknowledge ideas, issues, bigotries, industrial slaughters and systemic discriminations, which it otherwise wants buried under telegenic news and its manufactured consensus.

Its brash and unsparing laughter in the face of all things politically revolting and repressive is a slap on the polished cheeks of the perpetrators. Whether they are the exploitative gatekeepers of a much-abused faith, or neo-fascists in search of newer, more rabid ideologies to inflame the disenfranchised, everyone has faced Hebdo's derision.

It's the "derision of madmen", mad men who spare no one, not even gods.

The furore against Charlie Hebdo's latest cartoon on the Cologne sexual violence involving refugees and white female citizens is interesting because there was no furore against the Telegraph piece or the one on ScoopWhoop, which in fact not only say the exact same thing, but also invent an "Arabian rape game", Tahurrush jama'i'.

If rapes committed by military men (Israeli, American, Indian, Russian, Chinese, the list is endless) in war zones do not make anyone spring up and loudly proclaim an "Israeli/American/Indian rape game", then what flimsy ground allows European media to brand a particular incident involving alleged sexual crimes by some miscreants who happened to be Muslim refugees as a case of "Arabian rape game"?

What blatant display of entrenched prejudice is this?

And if it took Charlie Hebdo to reinsert that dead toddler Aylan Kurdi to drive home the point, to bring Europe face to face with its intellectual and emotional atrophy, then so be it.

#Syrian refugee crisis, #Cologne Mass Rape, #Aylan kurdi, #Charlie Hebdo
The views and opinions expressed in this article are those of the authors and do not necessarily reflect the official policy or position of DailyO.in or the India Today Group. The writers are solely responsible for any claims arising out of the contents of this article.