Why India needs a new Charter of Freedoms

This is in response to Markanday Katju’s DailyO article, “Why India Doesn’t Need a Charter of Freedoms”. In this context, it is important to state that one needs not to read the article by Pratap Bhanu Mehta in order to respond to Markanday Katju’s rebuttal. Rather, the latter's article needs to be responded to in isolation to put things in proper perspective.

I won’t use the word "Congress" but India certainly needs a new Charter of Freedoms. In the changing dynamics of the world, even the concept of freedom changes and so must change the charter of freedoms to accommodate the changes. If everything else moves as per the constitutional scheme, still the need for a new charter of freedoms will emerge by default. Without politicisation, there should be no two opinions about that. Hence, not only Congress but India should press for a new Charter of Freedoms. Not hate, but a new Charter of Freedoms is what India needs. (Photo: Reuters)

If we view it in the context in which Pratap Bhanu Mehta has tried to put it, the need of a new Charter becomes even more pressing. Many legal and constitutional experts have raised vital points about the implementation of various laws like the Unlawful Activities (Prevention) Act and according to them, things are moving in a dangerous direction with respect to freedom and liberties. In fact, it is the misuse of these acts, and laws which should be prevented in the new Charter.

With great respect, I would now try to respond to the two main points raised by Markanday Katju.

There is no doubt that the Indian electorate sees caste and religious affiliations of candidates and parties fighting the elections. True, the voter may not be too bothered by a candidate – or a party's – support for freedom and civil liberties. But does this mean that freedom, civil liberties and merit of the candidates should not be of any concern? If the general voter isn't bothered about these things, should the constitutional authorities, the legislature, executive and judiciary too forget about them?

Something seems missing in the argument of Justice Katju.

The Lok Sabha elections held after the Emergency might have produced a result which was against expectations and one which depicted the electorate's religious and caste affiliations more than its concern for freedom and civil liberties. But does this mean that people will display the same kind of behaviour at all other times too? Does this indicate that there has been no change in the electorate during all these decades after the Emergency? Even if people disregard the imposition of Emergency, it does not lessen the importance of freedom and civil liberties. (Photo: India Today)

The lessons learned from the Emergency entrust upon us the greater responsibility of avoiding such things and circumstances. A new Charter of Freedoms could be the panacea in this regard. In his point about the Emergency, Markanday Katju himself has suggested that freedom, or the suppression of it, played a crucial role in the outcome of the post-Emergency elections.

Congress was wiped out in North India for the simple fact that rights and freedoms were ruthlessly suppressed in the North and not so ruthlessly in the southern states of the county. This much has unintentionally been accepted by the Justice with respect to nasbandi (compulsory sterilisation).

The fact is that even if people disregard the imposition of Emergency and the suppression of freedoms and liberties by the Congress in their electoral behaviour, it does not lessen the importance of freedom and civil liberties. Thus, calls for a new Charter of Freedoms by the likes of Pratap Bhanu Mehta can’t be termed as being “out of touch with realities”.

Nay, it is in remaining in touch with realities and is the need of time that such demands be made.

Indeed, people want food in their bellies and jobs. But that never means people are ready to trade these for freedom of speech and liberty. As such, giving the example of Hitler is a faulty way of proving one’s point. Hitler might have gained unprecedented popularity and electoral gains but the end result of his acts and activities cannot be overlooked. By the suppression of freedom and liberties, he silenced all the sane voices of Germany and eventually brought destruction to the nation — and to the world at large.

The recent arrests of activists – if they have been made in disregard to the procedures established by law – is worrisome. Maybe they are not as worrisome for an empty-bellied person, or caste and religiously-charged person, but for conscious, aware citizens and constitutional experts and authorities, they must be of great concern. 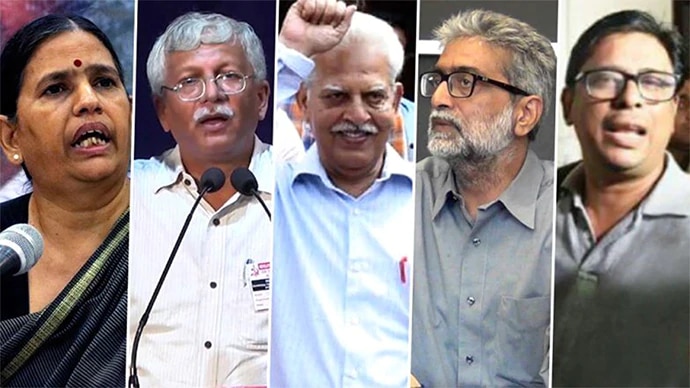 Indeed, the recent arrests of activists is worrisome. (Photo: DailyO)

To put it succinctly in the end, I can say that India needs a new Charter of Freedoms and needs it soon. Making such demands is not equivalent to being not in touch with realities. Rather, the realities of time demand a new Charter. A new charter never means giving up the current charter, and the Constitution, it means making this charter more in sync with the needs of the times, plugging loopholes and making the implementation effective. A law in the sight of the masses is how it is implemented and in the Indian context, most laws are implemented in their violations only.

In the post-truth age, information is processed and presented in such a way where the violators of the law hog the limelight and the rest are relegated to the background. There is not a shred of doubt in my mind that the majority of India values freedom, civil liberties and dignity — but the problem is that this majority is silently watching.

The killing and lynching of Akhlaq, Pehlu Khan and Rakhbar Khan make the new Charter more imperative —- we anyhow have to speak to the young people powerfully. There is a degree of pessimism in the former Justice's statement; we need always to be optimistic, especially in respect of our youth.

Also read: Why India doesn't need a Charter of Freedoms