In the first week of December 2015, Chennai witnessed the worst floods in 100 years. A year and a half later, the city and its administration do not seem to have learnt any lessons from the tragedy that claimed more than 300 lives.

The Ennore Creek, an important component of Chennai’s infrastructure for flood protection and water security, is facing a major threat.

Standing at the Ennore Creek, right next to the North Chennai Thermal Power Station (NCTPS), one can easily see how this ecologically sensitive zone has been dumped with waste materials from the NCTPS as well as Kamarajar Port — ashes, shattered glasses, plastics and other scrap materials polluting the area.

The memories of the oil spill (Kamarajar Port) in Ennore (January 2017) is still fresh in the minds of the people here. With close to 80 to 90 per cent of the population in Ennore completely dependent on fishing, the entire region will be affected if this creek is destroyed by the way it is now being treated.

According to Saravanan, an environmentalist, there are close to six fishing hamlets that are dependent on the Kosasthalaiyar and the Ennore creek, but the construction work going on inside the NCTPS is destroying the green belt. The green belt is being cleared for the thermal plant. 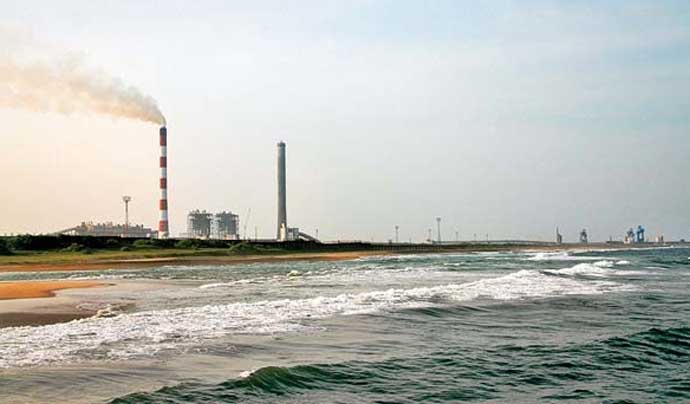 "And this is being done without acquiring permission from the Tamil Nadu pollution control board,” the environmentalist expresses concern.

No one is more worried than the local fishing community. “This is a place where we and our ancestors have been living for so many years, and we are not going to leave it. We understand that development is required for the country’s growth, but at the same time no one has the right to destroy the traditional fishermen," says D Selvarajan, a leader of the Ennore fishing community.

The North Chennai Thermal Power Station, which has an installed capacity of 630 megawatt, has received numerous awards for its higher production. But environmentalists and locals fear that the plant is causing a major ecological disaster.

The under-construction power plant is said to come up in 190 acres of land available in the existing NCTPS plant site, but environmentalists allege that the environment impact assessment report was not in consonance with the terms of references awarded by the ministry of environment and forests .

While the power plant is a part of the NCTPS Phase-III expansion, the proposed area where the new plant is being constructed, they allege, was initially shown as the green belt to get approvals for phases I and II. Now the same area is being developed, they allege.

“The third stage of the power station is being planned within the mandatory green belt of the phases I and II to be operational. This is going against the law because they haven’t got the consent. Also, this means that the sand dunes in this region is under threat which could be disastrous for the ground water aquifers. Moreover, the waste from the forest that is being cleared from the green belt is also being dumped in the region,” says Pooja Kumar, environmentalist.

To expand the thermal power station, more than 50 acres has already been deforested.

Ennore Creek is an extremely important  piece of hydrology as it separates the sea water  from the inland water bodies. This is the area where the brackish water bodies reside and it is surrounded by fresh water. This acts as a barrier to prevent the salt water from entering the fresh water.

“If the ground water in the inland sources gets salinised, there won’t be any drinking water. This area is very important because the Chennai draws close to 125 million litres of water every day. If those water sources get salinised, which is happening now, there will be a serious water crisis. These areas need to be declared as water sanctuary,” says environmentalist Nityanand Jayaraman.

During the Chennai floods of December 2015 , the surplus water was released into the Kosasthalaiyar river. But now the water bund in the river that connects to the Ennore Creek is breached in several points.

Dr Satyagopal,  state disaster relief commissioner, says, “Earlier, the people had from Ennore region approached us with an issue regarding the Kamarajar Port and we have taken necessary actions against that. This particular issue hasn’t been brought to our notice. We will do the needful if there is anything unlawful happening there.”

While it's difficult to forget the Chennai floods and the January oil spill, the ongoing developments in and around Ennore and lack of concern for the ecosystem certainly is making the coastal communities more and more vulnerable to cyclones, heavy rainfall and drought.

Doesn't look like we are capable of learning from the past.

Also read: Why Chennai’s floods are its milestone moment