Doklam standoff: Real reason behind why China has turned the heat on India

The current standoff at Doklam – with the muscle-flexing from China's military – comes at a very significant time for the People's Liberation Army (PLA). All the PLA's departments are currently in the throes of preparing for its 90th anniversary, on August 1.

Details of festivities are closely guarded. The only clues are vapour trails that now appear every weekend across the Beijing skies, and slickly produced propaganda videos that are being circulated around Chinese social media showing the military's strength.

The message is that China's army today is vastly different from its humble origins – and that it can stand up to protect Beijing's "sovereignty". No surprise then that the Doklam standoff has been universally portrayed in China not as a dispute involving Bhutan's land, which has been whitewashed out of official reports, but of India "violating" China's sovereignty.

To be sure, China's shrill rhetoric is largely because it sees the standoff as a China-Bhutan affair, and was perhaps taken off guard by India stepping in and stopping the road construction on disputed land, which would alter the status quo in the tri-junction. Yet, the timing, a month before the PLA's biggest anniversary in years, has perhaps heightened the rhetoric.

Hence the muscle-flexing. The PLA was founded on August 1, 1927, when the Communist Party organised an uprising against the Kuomintang in southern Jiangxi. Song Zhongping, a Beijing-based military expert, and former Second Artillery Corps officer told the Global Times that the 90th anniversary comes "in the midst of China's fundamental military reform and strategic transformation, so apart from commemorating its history, it's also a new start for the PLA." 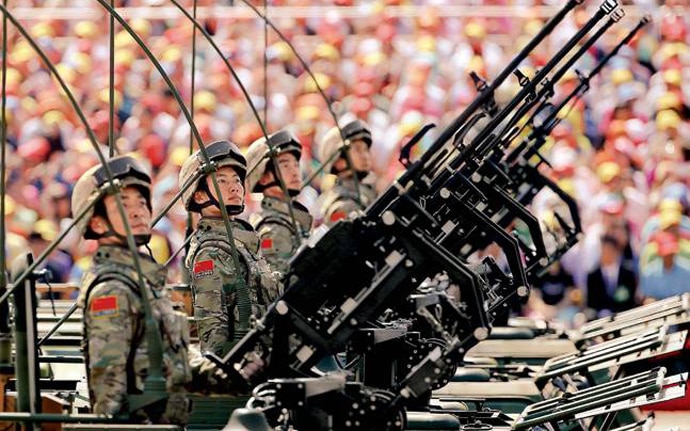 Last year, President Xi Jinping announced the demobilising of three lakh soldiers of the 2.3 million strong force. That number will be cut by another one million, bringing the PLA's strength under a million for the first time. The re-organisation of departments is equally significant. The focus is on winning a high-tech, short war and integrating the different services.

The Second Artillery Corps has been elevated as the PLA Rocket Force, while a Strategic Support Force has been created. The PLA Navy's resources have been increased, just as China opens its first overseas base in Djibouti near the Gulf of Aden, and inducts its second aircraft-carrier - and first home-grown one - into its rapidly expanding navy.

In the past, the army was the absolute main body of the PLA, but since China's national interests are expanding quickly overseas and there are more requests from other countries for China to share more of the global security burden, China has many more new missions that are beyond the army's capability," Xu Guangyu of the China Arms Control and Disarmament Association, told the Global Times.

For some in the PLA, the Doklam standoff has perhaps come at an opportune time. They have seized on it to whip up nationalism and support for the PLA, and to showcase its credentials ahead of August 1. One former PLA general in a widely circulated post on social media hit out at domestic critics of the army and the party and called on them to rally behind the PLA amid the Doklam standoff.

This past month, military outlets have showcased no less than two major drills on the Tibetan plateau. The first announced on July 3, showed battle tanks being tested. Then, this past weekend, state media showed videos of a major PLA exercise in Tibet involving livefire drills and anti-aircraft guns. And the expectation is there is only likely to be more muscle-flexing in the lead up to August 1.