I can recall many informal conversations in the 1950s and ’60s with my fellow Americans about India. They viewed India as part of the Soviet bloc. In those days, the Soviet Union supplied India with weapons and ships. The rhetoric in India was decidedly anti-American and the rhetoric in the United States was very anti-India, despite the shared democratic and entrepreneurial traditions in both countries.

World maps posted in US classrooms in the 1950s and 1960s highlighted American allies. Pakistan was always listed as an ally and India was not.

In the run-up to the 1971 war with Pakistan over Bangladesh, it appeared to me that India faced the danger of a war on two fronts: Pakistan as well as China. At the time, Prime Minister Indira Gandhi signed a treaty for mutual security cooperation with Moscow. This proved effective in keeping China out of the 1971 war, and formed a strong foundation for growing Indo-Soviet cooperation in military and economic affairs.

However, I saw that it further alienated the United States and it made our diplomats wary of dealing with India. I was working at the State Department at that time and the distrust between India and the US was at an all-time high.

When President Richard Nixon paid an official visit to Prime Minister Indira Gandhi earlier that year, the tension between the two of them was evident — even in still photographs. They detested each other and Prime Minister Gandhi made her feelings clear to president Nixon that day. It was a stunning and stinging snub of an American president.

I noted warily Pakistan’s role in assisting the United States’ efforts to open diplomatic doors to China in 1971 and, later, as a facilitator of aid to the Afghan resistance fighters against the Soviet occupation in the 1980s. As a result, the US effectively looked the other way when it came to Pakistan’s nuclear programme and the assistance it obtained from China for its missile and nuclear programmes. That is, until the Pressler Amendment was enacted and enforced.

All of these events, of course, have coloured the relationship between India and the US. India’s nuclear test in 1974 did not help matters. The United States saw this move as irresponsible, but what I think Americans failed to understand was that India wanted to be recognised as a mature power with a nuclear deterrent against a nuclear-armed adversary, China, which it had always considered its biggest rival and threat.

India also wanted to offset the unpredictable Pakistan next door. We still treated India as a colonial stepchild and continued to punish the country for its Russian affiliation. It seems to me that any measure India took to defend itself against other nuclear powers like China — and, later, Pakistan — was a legitimate right.

The United States acted like a two-faced ally to India. We acknowledged India’s fears of a nuclear-armed Pakistan and gave lip service to this threat, but did nothing about it. We continued to fund Pakistan’s military to support the goal of fighting the spectre of communism anywhere in the world at the expense of furthering our nuclear non-proliferation goals in South Asia.

Now, once again, we are funding the rogue government of Pakistan because we need their questionable help in fighting the terrorists in Afghanistan. This move risks the use of US taxpayer money for purposes contrary to our interests. To my mind, it seems befitting that India and the US should be the closest of allies — more so than they are currently. We should have a "super alliance". Once again, the US is funding the rogue government of Pakistan because we need their questionable help in fighting the terrorists in Afghanistan.

As the largest democracy in South Asia, India is more like the United States than any other country in that region. However, other than advancements largely in information technology and intellectual property, a large proportion of the Indian people are so impoverished that they are essentially oppressed. Weapons and arms — that has been the principal focus between our two governments, and that saddens me.

I strongly believe we need to do more to promote India’s interests worldwide. We tout England and Israel as our closest allies, yet India’s democratic government, location, brain trust, and trade synergies make it a natural and potentially more important economic and geopolitical ally for the future. We should decisively choose India and stop pretending that India and Pakistan are diplomatically equal. We must downgrade Pakistan and treat it as it is: an irresponsible, dishonest, rogue state.

As we continue to root out terrorists worldwide, it is important that we stand by our friends around the world who reflect our faith in democracy, entrepreneurship, human rights and religious freedom. India is the biggest of these friends. We must make the alliance between the democracies of India and the United States a robust economic one, built on a foundation of trust, shared democratic values and mutually beneficial trade and knowledge-sharing.

India should be granted a special relationship with the United States, one that gives it a preferred status in trade, knowledge-sharing, intelligence-sharing, immigration and defence. Part of that defence should include defending India against China.

I recognise that defence officials view China as America’s biggest potential threat in the world today. At least one of the historical motivations for continuing aid to Pakistan was to prevent it from becoming a client state of China’s. The Obama administration quietly started executing its "Pacific Pivot" strategy, which has been turning our diplomats’ and our navy’s focus to Asia, and more specifically, to China. Perhaps to amplify this threat, the Octopus provokes and pokes China.

When I was in Cambodia in 2010, for instance, the US sailed big warships into Cambodian ports, allegedly bringing in medical supplies. But my State Department contacts told me it was actually a show of force to irritate the Chinese — and to reinforce the importance of maintaining open sea lanes for international trade. Naval manoeuvres like these are strictly a way for the Octopus to taunt the Chinese and remind them that the US is in control and committed to keeping international waters free and open — especially in the South China Sea.

This strategy involves the cooperation of India as well. Over the course of my lifetime, I have witnessed India migrate from a pro-Russian country with an anti-American prime minister to a pro-American country and one of our closest allies in the region. I recall in the 1950s listening to very anti-American remarks from VK Krishna Menon, the legendary Indian ambassador to the United Nations.

Now Prime Minister Modi says just the opposite of what Menon said — a 180-degree shift. It seems to me that both India and the US see the other as important allies in containing the geopolitical influence of China. 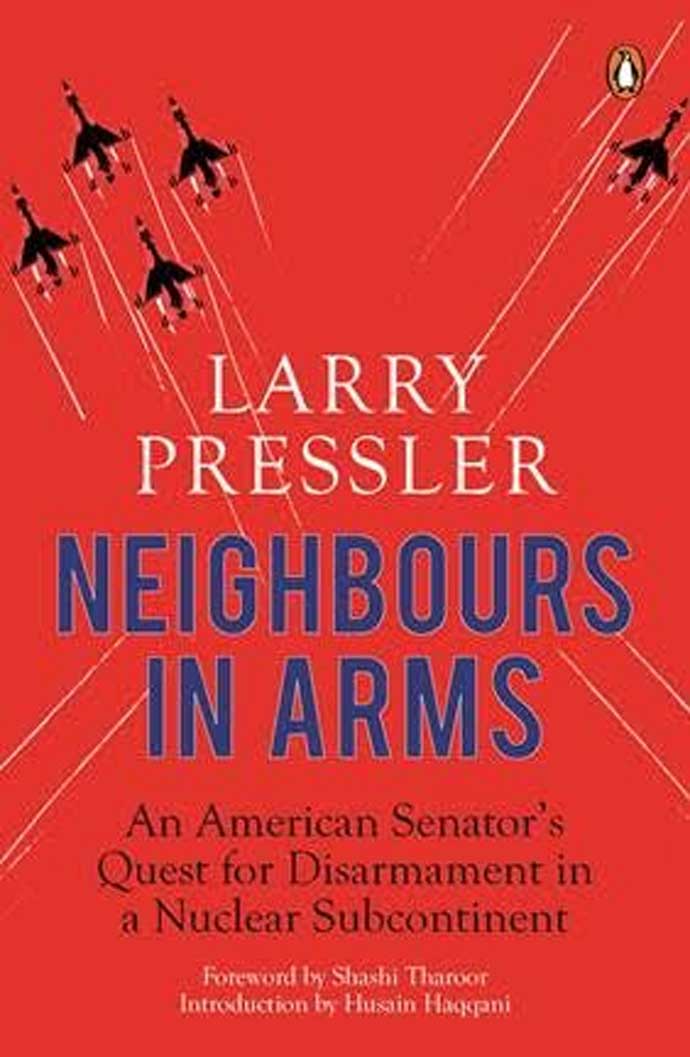 Neighbours in Arms: An American Senator's Quest for Disarmament in a Nuclear Subcontinent; Penguin/Viking; Rs 699.

In my recent discussions with current and former senior navy officials, I have learnt that the United States is on the verge of a massive effort to help build up the Indian Navy, and outfit its navy ships with nuclear weapons. The Indian Navy’s ship inventory is being significantly modernised.

The Chinese are posturing aggressively against the US Navy in the Philippines and the Spratly Islands, a disputed group of islands in the South China Sea near Vietnam. This archipelago is situated in the middle of important air and sea navigation routes. Free access to the South China Sea is critical for international trade and travel. In addition, there are oil and gas reserves there.

We really do not want a naval war with China. It would be costly to defend a place like the Spratly Islands. But we can send China a devastating message by strengthening the Indian Navy. An Indian Navy that has the capability of delivering nuclear weapons would cause China great concern.

In fact, if we actually outfitted the Indian Navy with nuclear weapons, China might back down from its antagonistic stance in the region.

#Book Extract, #India-US Ties, #China, #China-Pakistan
The views and opinions expressed in this article are those of the authors and do not necessarily reflect the official policy or position of DailyO.in or the India Today Group. The writers are solely responsible for any claims arising out of the contents of this article.