It is perhaps time for India to wake up and recognise that Tibetan refugees have never created any problems for India over the last 60 years.

While addressing a Chinese Lunar New Year reception held at the Great Hall of the People in Beijing, President Xi Jinping remarked: “From now to the middle of this century, the Chinese people will strive to build China into a great modern socialist country.”

“It will be a great era in which a new splendid chapter of the Chinese civilisation will be written. Every Chinese person must feel proud of living in such a great era,” Xi added.

Sadly, Beijing’s ‘minorities’ — the Uyghurs, Tibetans or Mongols — do not seem to have been given a decent place in “the glorious goal of national rejuvenation.” The Tibetans in Nepal suffer most from Beijing’s new policies. When Xi visited Kathmandu in October 2019, the PM of Nepal, KP Sharma Oli, told Xinhua that he was committed to strengthening bilateral friendship. The two sides signed 18 cooperation documents but not an expected extradition treaty. It did not stop Xi from saying: “Anyone attempting to split China in any part of the country will end in crushed bodies and shattered bones.”

“Following apprehensions, it could infringe on its sovereignty” a milder pact on Mutual Legal Assistance in Criminal Matters was signed, the Nepali media reported. It targets Tibetans leaving their country to take refuge in India. The illusion that the former Himalayan Kingdom could control its own destiny did not last long. 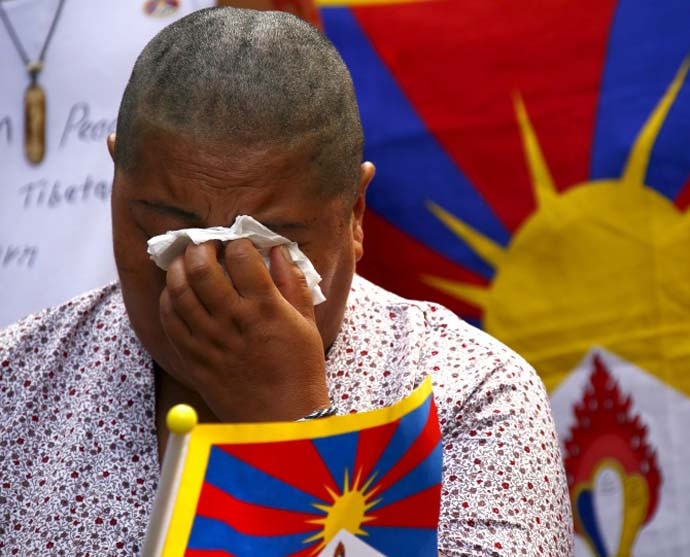 If the Tibetans were so happy in China, why would they take the risk of crossing the perilous Himalayan passes to escape the ‘Communist Paradise’? (Photo: Reuters)

On January 23, Nepal and China are said to have agreed to hand over citizens ‘illegally’ crossing their border. Meanwhile, the boundary management system signed during Xi’s state visit incorporated a provision to hand over individuals. The secret clause is now out in the open: Article 26 (2) of the agreement says: “The boundary representatives or competent authorities of both sides shall investigate cases of persons found while crossing the border illegally, ascertain their identities, crossborder facts and reasons as soon as possible and hand them over to the side where they stayed before crossing the border, within seven days from the day they are detained.”

According to experts interviewed by My Republica: “The provision could immediately target refugees from Tibet who sneak across the border to Nepal to make a safe passage to India.” Since the 1980s, Nepal has had a ‘gentleman’s agreement’ to let the refugees proceed to India (mostly to Dharamsala, the headquarters of the Dalai Lama) on humanitarian grounds. The new agreement will supersede this arrangement.

If the Tibetans were so happy in China, as projected by Beijing’s propaganda, why would the Dalai Lama’s followers take the risk of crossing the perilous Himalayan passes to escape the ‘Communist Paradise’? Beijing has a lot to answer on this. The truth is that today China is dictating terms to Nepal. Kathmandu does not have much choice. Nor does Myanmar.

During Xi’s recent visit to Myanmar, a joint statement said that “each side was pleased with the economic and social progress of the other.” Later, it was asserted that “the Myanmar side reiterates its firm commitment to the One China Policy and supports the efforts of China to resolve the issues of Taiwan, Tibet and Xinjiang, which are inalienable parts of China.” It was the first time that such a formula was imposed by China on a country. Myanmar has its reasons for wanting to please Beijing. The latter will now support the country on the Rohingya issue.

Meanwhile, the situation is worsening for Tibetans in Tibet. According to the official Tibet Daily, on January 12, the legislative branch of the Tibetan Autonomous Region voted in favour of new regulations to ‘strengthen ethnic unity’ in Tibet. In 2016, similar rules were introduced in Xinjiang. These were later used to justify crackdowns on Uyghurs.

A Xinjiang in Lhasa?

Tsewang Gyalpo Arya, the spokesperson of the Central Tibet Administration (CTA) in Dharamsala objected to the new regulations, arguing that the Chinese government wanted to make Tibetans a minority in their own country through systematic state-sponsored migration of a large number of Han Chinese. “This forebodes a very difficult and harsh time ahead for Tibetans in China,” he said.

Meanwhile, Kunchok Tsundue, the CTA’s Chief Planning Officer affirmed that “the demographic landscape of the Tibetans in exile has drastically changed, with more than half the population shown by a survey to have moved from India to Western countries.” According to a survey conducted in 2009, there were 94,203 Tibetans in India, 13,514 in Nepal, 1,298 in Bhutan, and 18,999 in the rest of the world, scattered in 27 countries, mostly Western countries.

“The Tibetans are now moving towards the West,” affirmed Tsundue. It is perhaps time for India to wake up and recognise that Tibetan refugees have never created problems for India over the last 60 years. In fact, they have been (and are) an asset for the country. The only ray of hope for Tibet is the immense difficulties faced by Xi Jinping; the coming Rat Year promises to be even more problematic for the Communist Party.

Also read: What India stands to lose by abandoning Tibetans for ties with China