China will make Islam 'compatible' with being Chinese: How the Communist Party is targetting its Muslim minorities

China moves to sinicize Islam and make it socialist-friendly. What exactly does that mean?

China has done it — yet again. While the rest of the world can do all the talking about religious bigotry, Chinas has acted on this and made it legal.

In a recent announcement, China has passed a new law that seeks to "sinicise" Islam within the next five years. 'Sinicisation' essentially means making something Chinese in character or form — especially non-Chinese societies.

"China passed a five-year plan to Sinicize Islam at a meeting on Saturday with representatives from China's eight Islamic associations," said a report in the Global Times. Representatives from local Islamic associations — across eight provinces and regions, including Beijing, Shanghai, Hunan, Yunnan and Qinghai provinces — discussed a five-year (2018-22) outline on the 'Sinicisation of Islam' at a seminar in Beijing on Saturday.

"During the meeting, participants agreed to guide Islam to be compatible with socialism and implement measures to Sinicize the religion. This is China's important act to explore ways of governing religion in modern countries," the report said. The exact plan on sinicisation will be announced soon, the report added. The highly polarised report in the state-owned newspaper did not provide further details or the names of the associations that agreed to the decree. An Uighur man looks on as a truck carrying paramilitary police travels during an anti-terrorism rally in Xinjiang. The banner reads, "Willingness to spill blood for the people. Countering terrorism and fighting the enemies is part of the police spirit." (Source: Reuters)

While the law seeks to Sinicise Islam within five years, a similar law could be expected for the other four religions — Taoism, Buddhism, Protestantism, Catholicism — in the country, according to state media. The report further said that the state will soon release an outline on the sinicisation — with Islamic communities urged to uphold the sinicisation of their religion by improving their political stance and following the Party's leadership.

The ruling Communist Party has justified the move, saying it faces a threat from Islamic extremism and separatism (the last theory more ludicrous we heard was when Donald Trump said that climate change was a hoax).

While it is appalling that this has now been legalised, the 'Sinicisation of religion' is nothing new in China — especially under the present political regime.

The aggressive Sinification campaign in recent years has been concentrated on the Islamic communities — largely tolerated in the past, but which have seen their freedoms now shrink — under Chinese President Xi Jinping, China's most powerful leader since Mao Zedong.

With such religious bigotry being legalised, Beijing will now ostensibly rewrite how the religion is to be practised — “guide Islam” to be “compatible with socialism. As of now, practising Islam is already forbidden in parts of China — Muslims caught praying, fasting, growing a beard or wearing a hijab face the threat of arrest.

According to the UN, more than one million Uighur Muslims are estimated to be held in internment camps where they are forced to denounce the religion and pledge allegiance to the officially atheist Communist Party. However, independent media reports peg the number to be close to 5.5 million. Whatever the number, these Muslims have reportedly disappeared in prisons and camps in the country’s autonomous Xinjiang region, according to human rights groups. This was reportedly after a large-scale effort to purge and squash ‘Islamic terrorism’ within the mostly Muslim ethnic minority.

If this is not Islamophobia of the highest order, we don’t know what is.

It started with systematically targetting the Uighurs and the threat has now progressed to other Muslim minorities in the country. Last year in December, Chinese provinces were heralded by government officials to remove their halal food standards — a stark contrast from earlier policies that encouraged the development of the halal trade for export. This was ostensibly done to contain the Muslim influence supposedly spreading into secular life. 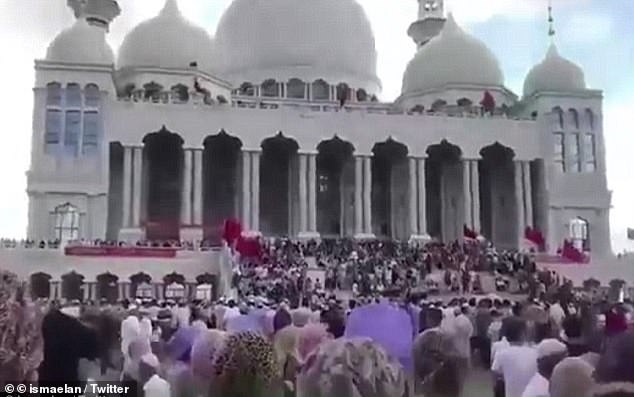 In August 2018, Chinese authorities had to delay the demolition of the Weizhou Grand Mosque in Ningxia after hundreds of Hui Muslims turned out to protest. However, they finally found a way last week. (Source: Twitter)

In fact, one report that made it to the outside world was filled with tales of unimaginable cruelty. The persecution of the Uighurs — who are either secular or practice a loose version of Sunni Islam — goes beyond the banning of beards and hijabs. The account of a young Uighur lady recounts how she was allegedly taken into custody at the airport after returning to China from Egypt, where she got married to a fellow Uighur and had triplets. Her two-month-old babies were reportedly taken from her, she was sent to a camp where she was beaten, electrocuted, stripped naked and her head was shaven. Eventually, she was taken to a hospital only to be told that one of her triplets had died. She is yet to hear about the fate of her husband. She has fled the country since her release — perhaps never to come back.

What other name could be given to this if not ethnic cleansing?

With over 20 million Muslims as part of its population, 10 of the country’s 55 officially recognised minorities being traditionally Muslim, Islam in China is more than a millennium old.

With Islamophobia growing in the past four years now, the world has sat up and civil societies have said that the world "can't ignore" the campaign against Muslims in China.

But since when has Xi cared about public opinion?