Has Chirag Paswan been able to retain the political legacy of Ram Vilas Paswan?

It is not all about the younger Paswan. With Mukesh Sahani, Chirag and Tejashwi, all qualifying as "young", the fate of Bihar’s future leadership depend on how they measure on the other parameters.

Before we begin, let the reader be apprised that this piece is not all about Chirag Paswan and his future, but about the entire state of Bihar and the future of its political leadership. Despite the time being absolutely ripe for it, Bihar’s search for a leadership that is young, capable, charismatic, visionary and also believable is far from over. With Mukesh Sahani, Chirag and Tejashwi comfortably qualifying as "young", the fate of Bihar’s future leadership depends on how these faces measure on the remaining parameters unless a new disruptor emerges; a very unlikely possibility as of now.

However exciting the prospect of youth may sound, we must understand that in isolation of any other virtue, the worth of youth is merely ornamental, along with being expeditiously depreciative in nature. 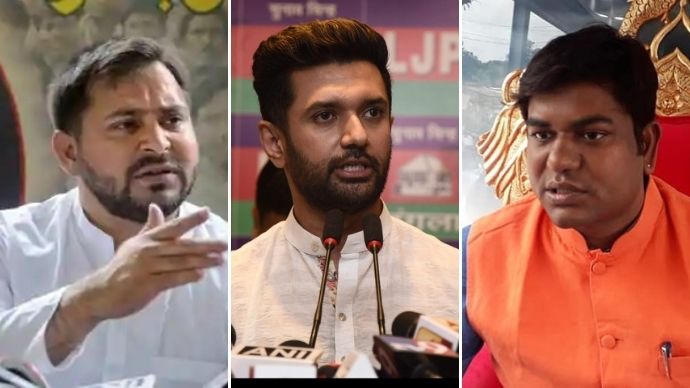 With Mukesh Sahani (R), Chirag (C) and Tejashwi (L) comfortably qualifying as "young", the fate of Bihar’s future leadership depends on how these faces measure on the remaining parameters unless a new disruptor emerges; a very unlikely possibility as of now.

Tejashwi Yadav has demonstrated the impact of his raw ‘charisma’ beyond any shred of doubt and it won’t be wrong to say that he commands the sole credit for whatever success the Mahagathbandhan has managed to achieve. In his own ways, even Mukesh Sahani has a similar effect on his supporters, in terms of sheer charisma, although he is still far from the scale required to be seen as an alternative. Though the lack of trust in Rashtriya Janata Dal and its ways with power weighed Tejashwi down to a great extent, his inability to come up with a marketable vision further prevented him from overcoming the ‘Gundaraj’ hangover.

Those who like Chirag and had pinned hopes on him, would also swear by his charisma, but somehow that charisma lies close to that of a star who just landed on a chartered flight from Mumbai than someone with whom people would comfortably connect to share their struggles. But it is still something to work with. To his credit though, he was the only one to try and come up with a vision; but even that vision fell flat when it came to accounting for a swing of votes or an iota of a shift in public perception, more than whatever was enabled by unremitting media attention. The vision, although a good document by itself, lacked in presentation, the necessary dialogue that was needed to connect it to the lives and aspirations of his voters.

'Bihar first, Bihari first' was his election pitch, slogan, and the title of his vision document as well. He gets full points for backing his belief in his vision from a strategic perspective, but strategy and planning is where Chirag’s brand of politics limits itself (other than managing postures and appearances). The legacy Ram Vilas Paswan (L) left for Chirag (R) was of being astute at that one game and of being able to leverage not assured seats but the mere promise of a vote bank to gain favourable positions within the government. (File photo: PTI)

It is when these strategies are taken to the people that you realise how often these are rejected prima facie and how nimble yet entrenched one has to be to give it the shape people are receptive to. Over the years, Ram Vilas Paswan had managed to limit his political decisions to betting on the right horse and yet never wagering it all at once. The legacy he left to Chirag was of being astute at that one game and of being able to leverage not assured seats but the mere promise of a vote-bank to gain favourable positions within the government. For Chirag, all of that legacy is lost, except for the vote bank.

In the 2010 Assembly elections, LJP partnered with RJD, and managed to win 3 seats out of the 75 it contested on. They followed it up by winning 2 seats in 2015, out of the 40 odd it contested as a part of the National Democratic Alliance. This time they didn’t need any help in continuing their natural progression towards scraping through with a solitary in Matihani, Begusarai. A victory by a margin of 333 votes, that was only better than three other victory margins in the state of 243 seats. With his vote share still hovering around the usual six per cent mark, what’s left with Chirag is an opportunity to rebuild or stare at a possibility of continuing his progression towards zero return from LJP’s next outing in the Bihar Assembly Polls; which wouldn’t be surprising, considering the sympathy votes they might have received this time can only be a one-time affair.

Soon after the passing away of Ram Vilas Paswan, Chirag has conceded both the vantage position of an astute politician as well as usual favourable position within the government, as Piyush Goyal sits comfortably with the additional charge of the Ministry of Food, PDS and Consumer Affairs. As of today, he is placed at the mercy of BJP think-tank on this one. It leads to the speculation whether it was at their behest that he ventured solo and if it is safe to say that Chirag Paswan has pulled a fast one on himself. BJP has possibly managed to hit two birds with one stone; Chirag playing both the stone and the primary victim. Nitish has still managed better in terms of retaining position as well as might. In the possibility that BJP is kind enough to award Chirag Paswan a portfolio, most of his legacy would be restored, but it would still be on the wane.

Since the possibility of seeing a new face that would challenge Chirag Paswan for his share of six per cent Biharis is distant, we can only hope that he retains the positives and works on the gaps to be perceived as a serious contender in times to come. He is likeable in the sense that he manages to present and carry himself much better than other second-generation leaders, but it is seldom enough in a state that’s known to be submerged in its politics and not easily taken by mere appearances.

In electoral politics, magic happens when voters can consume your ideas and share it in stories and eventually weave it into their dreams and aspirations, and there is only one way to set that ball rolling: to act convinced with your own ideas and stories, before taking it to the people. As of now, a state notorious for sprouting leaders like mushrooms lacks a face that is credible enough, selling a dream that is believable enough.

A place that was once Gandhi’s political laboratory remains in wait of a leader who can truly represent their aspirations.

#Mukesh sahani, #Tejashwi Yadav, #Chirag paswan, #Biharelections2020
The views and opinions expressed in this article are those of the authors and do not necessarily reflect the official policy or position of DailyO.in or the India Today Group. The writers are solely responsible for any claims arising out of the contents of this article.