He treated the staff as his colleagues and always made me sit next to him in events we attended.

Cho Ramaswamy gave me my single biggest journalism lesson of not sharing personal information from a political leader’s life for a sensational story. That is also how he managed to maintain such close relations with so many politicians like Morarji Desai, MGR and Jayalalithaa.

They may not have always agreed with his strong, upright views, but they respected him. I remember being with him during a meeting with Karunanidhi whose political views he did not share. The meeting lasted for hours.

He was also firm about never letting reporters make personal attacks through an article. If it was an accusation, we had to wait for the other side of the story and give it due prominence. Above all, he was a fair man.

Around the time I met him, though not an active part of Nadigar Sangam (South Indian Artists Association), he was also always called upon to solve crises in the film industry. 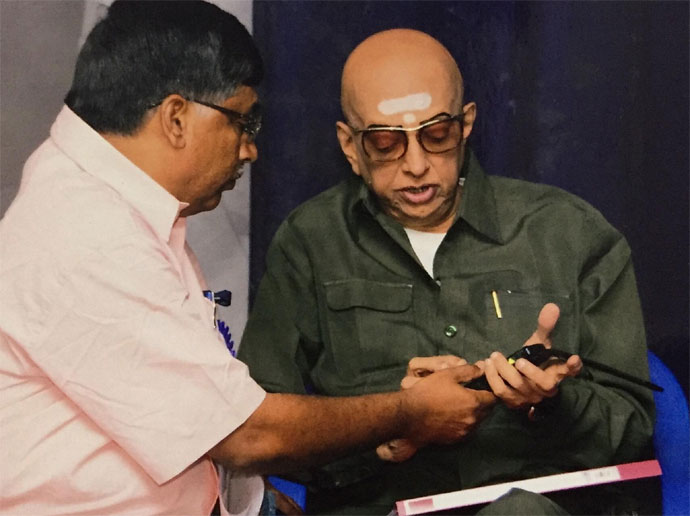 Cho Ramaswamy's views were ahead of their time.

During one such instance where Kamal Hassan’s 1998 film Kaathala Kaathala was facing film union trouble, he decided to act in the film just to prove a point and support Kamal. He had actually given up acting and turned down many offers before this happened.

There was always a lot of laughter in the Thuglak office when he was around. Editorial discussions were serious but short. He treated the staff as his colleagues and always made me sit next to him in events we attended. My fondest memories are of the entire staff of Thuglak having lunch together. This was a regular practice and lunch always came from his home.

He will always be in my thoughts for his honest journalism. Thuglak took no favours from anybody and would publish no government advertisements from the state or Centre.

His views were ahead of their time and it is a great loss for us and the entire nation.

He shared a long and deep friendship with Jayalalithaa. I was in the hospital with him when he heard about her cardiac arrest and her condition worsening.

Despite his own illness, he enquired about her all day. The last time I saw him he was in deep sleep and I don’t know if the news of her passing had reached him.

(As told to Prachi Sibal.)

Also read: Jayalalithaa was a political ally nobody could trust

#Jayalalithaa, #Tamil Nadu, #Cho Ramaswamy
The views and opinions expressed in this article are those of the authors and do not necessarily reflect the official policy or position of DailyO.in or the India Today Group. The writers are solely responsible for any claims arising out of the contents of this article.

S Ramesh is Chief Reporter with the Thuglak magazine and worked closely with Cho Ramaswamy over the years.