Sure, CIA called VHP and Bajrang Dal 'militant', but the agency is way worse

The world came crashing down for far-right Hindutva outfits like the Bajrang Dal and the Vishwa Hindu Parishad (VHP) after news got out that the Central Intelligence Agency (CIA) of America had categorised them as “militant religious organisations” in their “World Factbook”.

And while this categorisation has added zero value to what a sizable chunk of the liberal population have already been saying for a long time, it did manage to annoy members of the organisations themselves. After all, what gives an American federal intelligence body the right to call a spade a spade? The VHP, which claims it's a nationalist group that works for the betterment of the country, has called the CIA's allegations "baseless" and "false", and has gone so far as to threaten to launch an "international movement" against the CIA, should it refuse to reclassify the Hindu groups.

What's more, others have joined in as well. Khemchand Sharma, an advisory board member of the CBFC (and also, former convener of the BJP Samvad Cell of Delhi), vehemently “rejected” this “reference” and announced the initiation of legal proceedings against the CIA.

If there was ever a time when the laugh-cry emoji was more relevant!

And while the idea of a bunch of Hindutva leaders launching an "international movement" against the CIA elicits an unhealthy mixture of mirth and what the Germans call “Fremdschämen” (second-hand embarrassment), a point made by the VHP does kind of stick.

In a statement, the VHP’s Surendra Jain said: “The CIA is the one that propagated terrorism in the world. They are the ones who trained Osama Bin Laden and are responsible for destabilising governments.”

It would seem as if the pot is indeed calling the (saffron?) kettle black. And while there is no denying that the kettle, here, is as black as it gets, let us take a look at the pot and ask the question in earnest: what gives an American federal intelligence body the right to call a spade a spade, especially when it has been the same spade for the most part of its terrible history?

Leaving the utterly confusing utensil-tool-based analogies behind, the CIA has a unique track record when it comes to engaging in acts of questionable nature, which did involve a whole lot of destabilising foreign regimes for their own benefit, even if it did not involve creating Osama Bin Laden.

The CIA was officially created soon after the end of World War II, in the year 1947, after President Harry S Truman signed the National Security Act. American journalist Steve Kangas, who was a vocal opponent of the “institutionally and culturally corrupt” CIA’s actions, wrote a report in 1997, titled, “A timeline of CIA atrocities”, in which he noted that the organisation “uses every trick in the book: propaganda, stuffed ballot boxes, purchased elections, extortion, blackmail, sexual intrigue, false stories about opponents in the local media, infiltration and disruption of opposing political parties, kidnapping, beating, torture, intimidation, economic sabotage, death squads and even assassination… [and] justifies these actions as part of its war against communism.” 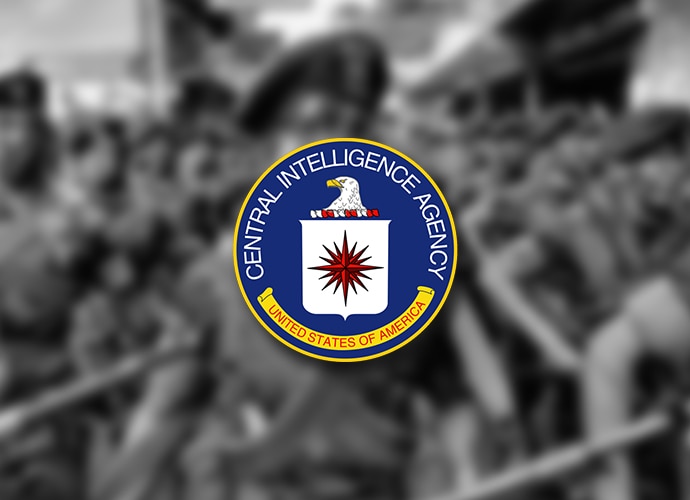 They don't talk much. [Photo: DailyO]

Influencing Manipulating the Italian national elections in 1948. Overthrowing the democratically elected Mohammed Mossadeq in a military coup (and replacing him with a dictator, the Shah of Iran), after he threatened to nationalise British Oil in 1953. Conducting appalling human experiments with mind control — MK-Ultra, a top-secret CIA program, used electro-shock therapy, hypnosis, polygraphs, radiation, and a variety of drugs, toxins, and chemicals (including LSD) on mentally impaired children, American soldiers and sexual psychopaths, among others, to try and achieve “mind control”.

Overthrowing the Guatemalan leader Jacobo Árbenz in a military coup — he had threatened to nationalise the Rockefeller-owned United Fruit Company, in an effort to create a middle class in a country torn apart by extremes of wealth and poverty and racism — and replacing him with a series of right-wing dictators whose bloodthirsty policies would kill over 2,00,000 Guatemalans in the next 40 years.

Creating drug lords in Afghanistan, using them to its advantage for years before nabbing them for “narco-terrorism” when they were no longer needed. Supplying arms to multiple factions in Afghanistan post-the Soviet occupation of the country in the 70s.

The list is as long as it is frightful.

And this is just from what's been made public.

So yes, the CIA may have had the good sense to note that the VHP and the Bajrang Dal are dangerous organisations.

But it doesn’t, for a moment, change the fact that even at its “best” (read "least bloody") instance of creating global havoc (especially in Latin American nations), the CIA is, quite possibly, worse than the combination of both the far-right Hindutva groups.

The CIA is the reason groups like these get created in other nations.