With CAA, BJP has voted itself out of power in Assam in 2021

The BJP has not merely broken a promise made to Assam. It has betrayed the Assamese people by bringing in the Citizenship Amendment Act.

What is your favourite nursery rhyme which you still remember line-by-line?

“One blast is a rice-mill belt down,

Two blasts are the gods of thunder,

Three blasts and you run for cover!”

This three-line poem used to be my go-to-jingle as a kid growing up in Assam during the 1990s. Demonstration in Guwahati in 1980s as a part of the Assam Movement against "foreign" nationals. (Photo: India Today archives)

The ongoing protests against the Citizenship Amendment Act (CAA) bring back memories of the political situation in the late 1980s and 1990s in Assam. Police hitting people, people attacking police, followed by the political parties debating who hit first. Replace police with the Black Cats and the Army now, and you have a repeat of the situation in Assam in the 1990s. As someone too young to remember the Assam Andolan, all the stories and events narrated by our elders are being shown on the TV screens today, as if to tell us, “This is what you missed, kid.”

When I began writing this piece, it was to explain the immediate trigger which set off Assam after 26 years of slumber. The trigger was betrayal by the leaders who we trusted.

As the protests spread to other parts of the country, a need arose to explain the difference in the nature of dissent in the Northeast vis-à-vis the rest of the country.

To my painful realisation from experiences on social media, the supporters of BJP are not ready to listen. Their trust in the verbal ‘assurances’ of the Centre is not to be broken by the betrayal which Assam witnessed on the ground. It was pointless to argue with them.

Hence, I write on something which the BJP may be interested in: why the party stands no chance in the 2021 Assam elections if the CAA is not revoked.

For anyone with a working knowledge of Indian politics, it is very easy to see that there are only two aims which the BJP seeks to fulfil through the CAA: increase of vote bank and a march towards Hindu Rashtra. If the concern had been of the so-called ‘persecuted Hindus’, then Sri Lanka and Myanmar would not have been omitted. Assam was betrayed by its leaders, sparking protests in the state after 26 years of slumber. (Photo: Reuters)

While the rest of India fights the omission of Muslims in the CAA, Assam’s concern is on a more functional level: Is the state even capable of providing basic rights and opportunities to the Bangladeshis who the CAA proposes to give citizenship to?

As someone who was raised in the beautiful environment of Assam, as someone who witnesses thousands of postgraduates and higher degree holders struggling with unemployment in Assam, I can assure you that the answer is a resounding NO.

On the question of how many Bangladeshis does the Centre intend to settle in Assam, take a look at the videos of infiltration from the Assam-Bangladesh border.

I am sorry to say that any state which does not share its border with Bangladesh is ill-equipped to fathom why Assam and the Northeast want all Bangladeshis (who came after 1971) out. Take a look at the demographics of Tripura, and you will understand why Assam has problems trusting the assurances of the Prime Minister.

Assam and the Northeast are not fighting a probability, but a reality which the Centre wants to stamp ‘unchangeable’ with the CAA. Assam is not saying “We don’t want to.” Assam is shrieking “We cannot.”

Public memory is not short-lived

The BJP feels that in the one year between the enforcement of the CAA and the elections, the current protests will die out and Assam will forget.

Let me assure the BJP: neither of the two will happen. The Assam Movement of 1983 and the Assam Accord are issues that every Assamese holds dear to his heart. Any attack on these two will not be forgotten or forgiven. The BJP came to power in the northeast solely on the basis of its promise of identifying and sending back all illegal immigrants from Bangladesh. The national media may credit Himanta Biswa Sarma for the same, but that is not the case.

According to the Assam Accord, the Government of India agreed to secure the international border against future infiltration by the "erection of physical barriers like walls, barbed wire fencing and other obstacles at appropriate places" and deploying a patrol by security forces on land and river routes all along the international Bangladesh-India border.

The Congress slept for years over its promise of acting on the Accord. The then-Chief Minister Tarun Gogoi even went on to blatantly claim, “Where are the Bangladeshis? There are no Bangladeshis in Assam.” 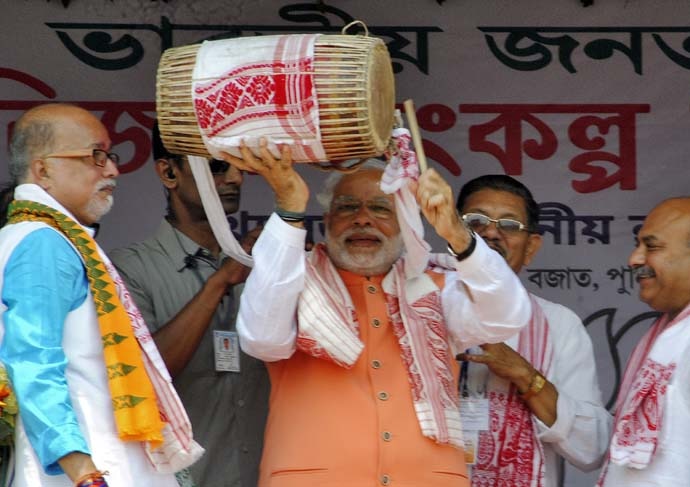 The hope that BJP will act on the promise made in the Assam Accord won the elections for the saffron party in the state. (File photo: Reuters)

It was the hope that BJP would act on this promise is what won the elections for the saffron party in Assam. With the promise being broken, and the CAA being imposed in spite of the protests, the BJP has dug its own grave in Assam. To add insult to injury, the ruling Asom Gana Parishad (AGP) and the Chief Minister — whom the Assamese revered as a regional hero for his contribution to the Assam Andolan — completely defied and went against the wishes of the people. For Assam, this is not just a broken promise but a betrayal.

Analysts may look at the simmering down of anti-CAA protests in Assam and smile with expectation, but we are talking of a state experienced in preparing for a long fight. Assam’s tryst with the army has taught her the utter futility of fighting with guns, and the Assamese will go to any extent to keep the struggle non-violent. Assam will sing the national anthem and make peace with armed forces. Assam will even drape her children in the national flag to escape the bullets. However, she will not forget the betrayal of 2019.

The tricks, which Dispur and New Delhi might be contemplating for Assam, have already been unsuccessfully deployed in the 1990s. The simmering down of the protests is a preparation for the long fight, for Assam is well-versed in peaceful countermeasures.

Come 2021, the AGP will need to make major changes to even think about winning. For the Congress, Gaurav Gogoi will somehow (although I do not know how) need to assure the Assamese people that he will not repeat what his father did with respect to the illegal immigrants. It will also be doubly difficult for the two parties if a new political party is formed by the protesters and brought in into the election fray.

As for the BJP, irrespective of what they do now, it is already too late. Assam has bitterly registered their betrayal.

Post your comment
#Asomganaparishad, #Bangladeshiillegalimmigrants, #Assamaccord, #Citizenshipamendmentact
The views and opinions expressed in this article are those of the authors and do not necessarily reflect the official policy or position of DailyO.in or the India Today Group. The writers are solely responsible for any claims arising out of the contents of this article.