Who is (not) a citizen of India?

India Today Group Editor-in-Chief talks about what is the truth of the CAA, NPR and NRC, in the January 20 edition of the India Today Magazine.

Migration has become a controversial and explosive issue across the world. The entry of legal or illegal migrants in any significant number stokes fear among the citizens of threats to their cultural identity or their economic well-being. Predictably, in this atmosphere of uncertainty and instability, there will be politicians ready to exploit the situation for electoral gain. One of President Donald Trump's campaign promises, for example, was to build a wall along the border with Mexico to keep illegal immigrants out. In the United Kingdom, Brexit was fuelled by fears of immigrants swamping the country, and Prime Minister Boris Johnson won a huge electoral mandate at the end of 2019 to ensure his country's swift exit from the European Union.

So it was no surprise when the Narendra Modi government, in its second term, implemented a key promise in its manifesto and introduced the Citizenship Amendment Bill (CAB) in Parliament, which would offer an opportunity for illegal immigrants from Hindu, Sikh, Buddhist, Jain, Parsi and Christian communities in Afghanistan, Pakistan and Bangladesh to apply for Indian citizenship. It made no mention of illegal Muslim immigrants. Passed on December 12, the CAA, coupled with the government's plan to create a nationwide National Register of Citizens (NRC) — a register of citizens mandated by the Census Act of 1948 but never carried out — has sowed fear and confusion among Muslims and triggered nationwide protests, which have, over the past month, led to the deaths of 27 persons, destruction of public property and thousands of arrests across the country. 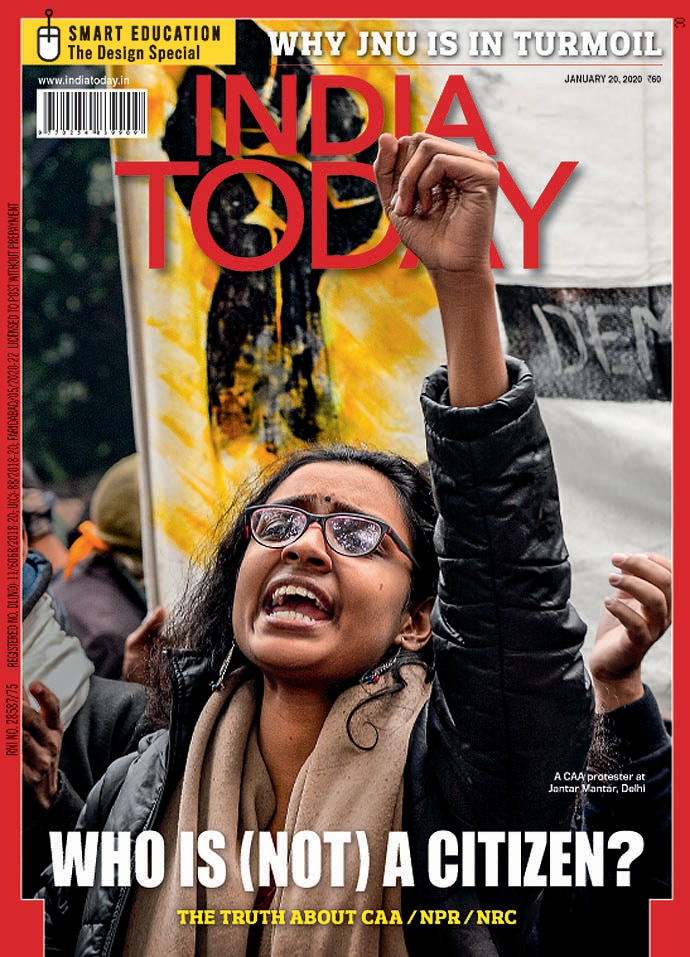 India Today January 20 cover, Who Is (Not) a Citizen.

Many of the protests have been led by the BJP's political opponents — the DMK in Tamil Nadu, the TMC in West Bengal and the CPI(M) in Kerala. A majority of the protests are spontaneous expressions of dissent by ordinary citizens — a diverse mix of students, professionals, intellectuals and celebrities. Speaking straight from the heart, they are raising genuine concerns about how the NRC proposes to include legitimate poor and marginalised citizens who might either have not felt the necessity to acquire documents so far, or lost them, and who cannot afford a fresh set. Beyond this, the protesters see a political motive in the BJP using CAA-NRC as twin weapons to further their Hindutva agenda by legitimising Hindu migrants while disenfranchising Muslims, with an eye to the assembly elections in West Bengal and Assam in 2021. The problem of illegal migrants has been acute in east India in the aftermath of the Bangladesh war of 1971.

That the government has spoken in different voices on the CAA and the NRC hasn't helped matters either. Early in December, home minister Amit Shah had emphasised that a nationwide NRC was on the anvil. But soon after the protests, both he and Prime Minister Modi did a volte face on the issue.

While an NRC is essential, it is how the government will implement it that is causing concern. Assam, for instance, has rejected the findings of its NRC. The register published in the state last August saw the exclusion of 1.9 million people, many of them believed to be Indian nationals. What will be the fate of a similar nationwide exercise, left to bureaucratic whims and fancies, is anybody's guess.

The whole issue has a tortuous history and is engulfed in misinformation. Political parties are blaming each other while fanning the fire for their political ends, worsening the situation. It is being seen as a repudiation of the fundamental tenets of the Constitution. Although Mrs Indira Gandhi introduced the word 'secularism' in the Preamble to the Constitution through the 42nd Amendment in 1976, the Supreme Court has on numerous occasions confirmed that secularism is a basic feature of the Indian Constitution. The whole trouble, I believe, started with the exclusion of Muslims in the CAA and the BJP's narrative on the NRC, followed by the announcement of the National Population Register (NPR).

This had been preceded by the abrogation of Article 370, the Ram Mandir verdict and the criminalisation of triple talaq, unleashing panic among the estimated 200 million Muslims of India, no doubt fuelled by the BJP's opponents. However, this government has only exacerbated such fears by using its brute majority with great alacrity in pushing through these measures in a sequence that was bound to cause alarm. In their own interest at least, they could have prepared the ground better, referencing the fact that previous governments too have extended similar provisions of citizenship.

The current fears are not entirely unanticipated. Our August 2018 cover story, 'Assam's Nowhere People', spoke of the fear and uncertainty among the people of the east Indian state ahead of its NRC. What began as a campaign against illegal immigrants, we believed, could have a ripple effect and spark communal conflict across India. Our cover story, 'Who Is (Not) a Citizen', put together by Senior Editor Kaushik Deka and Associate Editor Sonali Acharjee, demystifies the CAA, the NRC and the NPR and looks at the wave of student protests across the country.

India has its fair share of Pandora's boxes. Opening up a new one when there are more pressing issues, like fixing the economy, to address is clearly not in our interest. Nothing binds a country like equitable economic prosperity. India should see itself as a modern state whose purpose is to improve the economic welfare of its citizens while protecting the liberty of thought, expression, belief, faith and worship as enshrined in our Constitution. We are the most unique country in the world. Despite unmatched diversity in language, culture and religions, we are still one country. Let us not lose this at any cost.