A bumpy ride ahead for Citizenship (Amendment) Bill

As the Rajya Sabha gears up to discuss the CAB, the polarising nature of the Bill cannot be overlooked.

Why is the Bharatiya Janata Party (BJP) government bent on pushing the Citizenship (Amendment) Bill, 2019 (CAB) in the Upper House? The CAB was passed by the Lok Sabha on Monday night with a huge margin of votes (311 MPs for, 80 against). It is in for a thriller in the Rajya Sabha on Wednesday where the BJP camp is exuding confidence that it has 130 votes as against the Opposition’s 110.

Let me come up with a decoder at the very outset. After seriously polarising issues like Ram temple in Ayodhya and Article 370 reached their culmination as per the BJP’s scheme of things, the saffron party has run out of communally divisive issues. It is looking to invent new ones, first for the Uttar Pradesh Assembly polls in 2022 and, then, for the 2024 general elections.

The CAB and National Register of Citizens seem to perfect the pitch for the BJP. 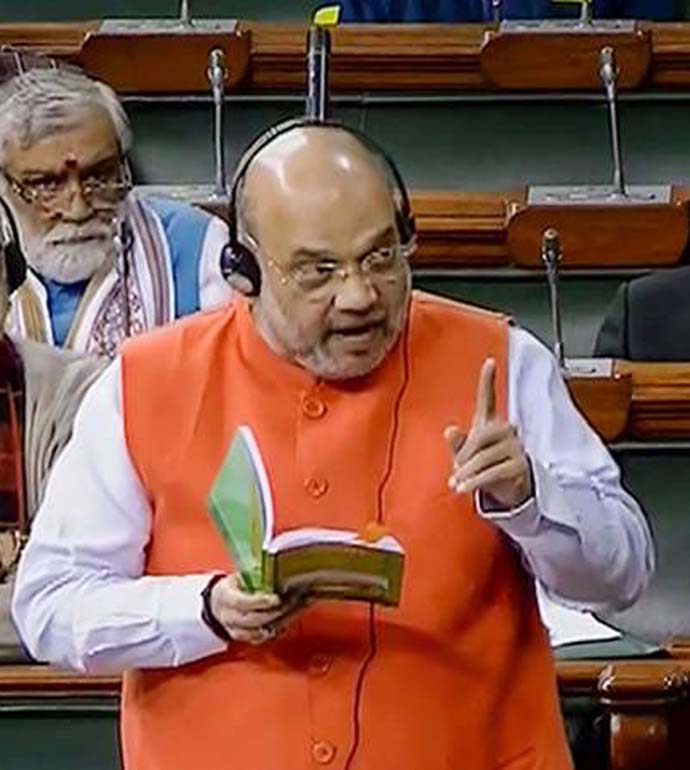 Amit Shah presenting the Citizenship (Amendment) Bill in the Lok Sabha on Monday. The Bill should be seen as a polarising tool by the BJP. (Photo: PTI)

Besides, the CAB noise cleverly shifts focus away from the worrying state of the Indian economy. The Bill had died in the Rajya Sabha in the Budget Session of May 2019 due to a lack of numbers and consensus. This time, the government appears to be buoyant despite flip-flops from the Shiv Sena (which supported the bill in the Lok Sabha on Monday but is now singing a different tune) and sharp divisions within the Janata Dal (United) led by Bihar CM Nitish Kumar. The JD(U) and Shiv Sena have six and three members in the Rajya Sabha, respectively. Much will depend on these nine votes.

Deep divisions have surfaced within key NDA ally JD(U) with whom the BJP is running the government in Bihar. The JD(U) supported the government in passing the CAB in Lok Sabha on Monday. However, the next day, prominent party leaders started distancing themselves from their party’s stand. It started with the high profile JD(U) Vice President, Prashant Kishor, terming the decision to support CAB as unfortunate.

However, alarm bells started ringing in the ruling coalition when former Rajya Sabha member and the party’s national general secretary, Pavan K Varma, publicly expressed his disinclination in supporting the CAB when it comes for voting in the Upper House on Wednesday. He tweeted: “I urge Shri Nitish Kumar to reconsider support to the #CAB in the Rajya Sabha. The Bill is unconstitutional, discriminatory, and against the unity and harmony of the country, apart from being against the secular principles of the JD(U). Gandhiji would have strongly disapproved it.”

The Shiv Sena has already reversed its stand on the issue after voting in its favour in the Lok Sabha. However, party chief and Maharashtra chief minister, Uddhav Thackeray, tantalisingly remarked that his party had raised many questions on the Bill on Monday and “if these queries are not answered, we won’t be supporting the CAB in the Rajya Sabha.”

The Bill is highly contentious since it seeks to amend the Citizenship Act of 1955 and amend the definition of the illegal immigrant for Hindu, Sikh, Parsi, Buddhist and Christian immigrants from Pakistan, Afghanistan and Bangladesh, who have lived in India without documentation.

It should be seen as a polarising tool by the BJP.

It is aimed at the West Bengal Assembly elections and keeps the Northeast completely out of its ambit. The BJP government’s concern for ‘persecuted’ Hindus in India’s neighbourhood is laughable. Sample the following statistics of constantly dwindling Hindu population in these countries.

Currently, the total population of Hindus and Sikhs in Afghanistan is not more than a few thousand.

Besides, it purposely excludes persecuted Muslim sects and other minorities in various countries, like Shias and Ahmadiyas in Pakistan, Rohingya Muslims and Hindus in Myanmar, and Hindu and Christian Tamils in Sri Lanka.

More simply put, only Muslims would face deportation, not non-Muslim immigrants — and the latter category would be eligible for citizenship after six years of residence, instead of the mandated 12 years, in India. The CAB blatantly legalises religious discrimination and the government’s unabashed stand has been that Muslims can seek refuge in Islamic nations, though the government has been silent on many red rags mentioned.

If the Rajya Sabha passes CAB on Wednesday, Muslims will be legally established as second-class citizens of India by providing preferential treatment to other groups. However, even if the Rajya Sabha passes it on Wednesday, the Modi government would have to cross a more formidable obstacle — the Supreme Court, where the issue would surely land up. It’s highly unlikely that such legislation would pass muster in the apex court as it violates Articles 14 and 15 of the Constitution.

Moreover, it poses a fundamental question: Whether any Parliament has the power to sidestep the Constitution!

#Cab, #BJP, #Narendra Modi, #Minority
The views and opinions expressed in this article are those of the authors and do not necessarily reflect the official policy or position of DailyO.in or the India Today Group. The writers are solely responsible for any claims arising out of the contents of this article.