Come 2019, why the BJP could be looking at serious losses in the Hindi heartland

There’s only a day to go for the actual results. But number-crunching of Assembly exit poll data suggests the BJP could lose substantial ground in the Hindi heartland in next year's general election.

The BJP could lose up to 32 of the 62 seats it won in Rajasthan, Madhya Pradesh and Chhattisgarh if the trends picked up by the India Today-Axis My India exit poll carry over into the general elections next year. These three Hindi heartland states had offered rich pickings for the Bharatiya Janata Party in the 2014 Lok Sabha polls. The party had swept virtually all the seats on offer in these states, bagging an aggregate of 62 out of the 65 seats on offer. However, life may not be so easy for the BJP in the next general elections. The data team at India Today added the trends for each Assembly seat and extrapolated these on Lok Sabha seats. While an Assembly election is fought on issues which are very different from a Lok Sabha election, an extrapolation of exit poll trends throws up interesting findings for political enthusiasts to mull over.

The Axis My India exit poll has a sample which covers every single assembly constituency and by adding individual trends for each assembly seat, one can get a rough idea about the popularity of a party in the Lok Sabha seat.

According to the Axis My India findings, the Congress’ tally in the next Lok Sabha polls could jump from 3 to 35 seats, if the findings of the exit poll are repeated in the 2019 general elections.

A state-wise analysis of the same data suggests that the BJP might lose the maximum number of Lok Sabha seats in Rajasthan, where the party had bagged all the 25 seats on offer in 2014. Adding the exit poll findings, the BJP is comfortably placed on only 9 Lok Sabha seats, with the Congress coming up on top in 16 Lok Sabha seats. 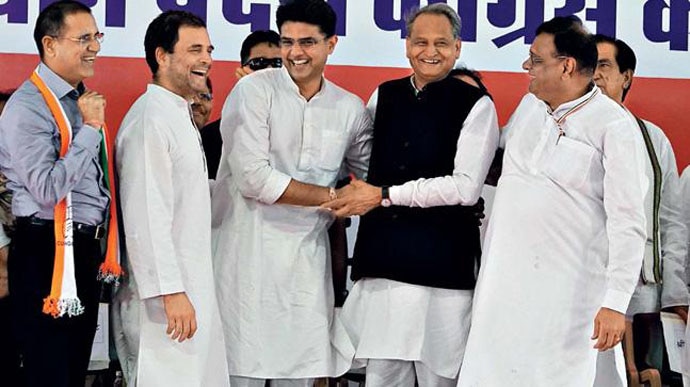 The Congress is leading on seats like Jaipur, Jaipur Rural, Sikar, Alwar, Bharatpur, Dausa, Pali, Barmer and 8 other Lok Sabha seats. The BJP is ahead only in the Lok Sabha seats of Ganganagar, Bikaner, Jalore, Udaipur, Banswara and four other seats.

In Madhya Pradesh, the BJP does much better.

According to the India Today-Axis My India exit poll findings, the BJP could be looking at reverses in Chattishgarh as well.

The party had won 10 out of the 11 seats on offer in the last Lok Sabha polls. If the Axis exit poll holds in the 2019 polls, the Congress could bag 7 Lok Sabha seats on offer, while the BJP’s tally could crash to 4.

The BJP’s big hope is that the verdict in the assembly elections will have limited bearing on the Lok Sabha polls, since the party’s governments in Madhya Pradesh and Chhattisgarh were up against three terms of anti-incumbency. BJP strategists argue that Prime Minister Narendra Modi remains way more popular than the Chief Ministers in these states. The Political Stock Exchange (PSE) data compiled by Axis My India for the India Today Group bears this out. In the tracking poll done in the month of September in Rajasthan, only 35% of the respondents wanted Vasundhra Raje as the state’s chief minister — while 57% indicated that they wanted to give Narendra Modi another chance to be Prime Minister in the 2019 polls. Even in a state like Madhya Pradesh, where the Chief Minster was quite popular, the PM’s popularity far exceeded that of the Chief Minister. 46% of the respondents wanted Shivraj Singh Chauhan as Chief Minister — 56% wanted Narendra Modi as PM. 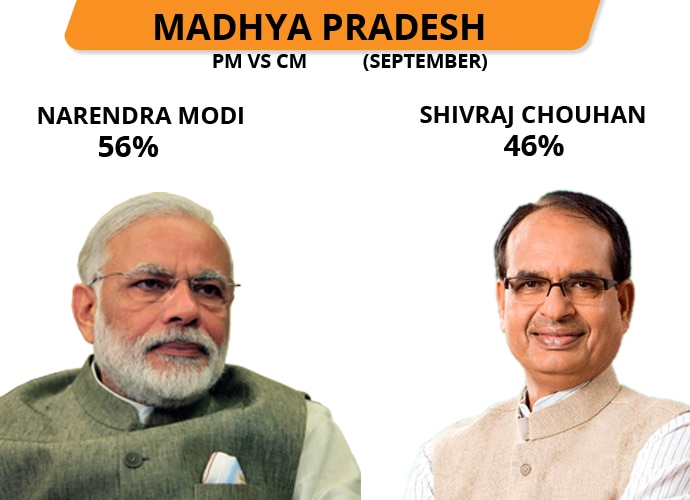 In Chhattisgarh, the Prime Minister’s popularity was even higher. 59% of the respondents wanted Narendra Modi as PM while 41% wanted to give Dr Raman Singh another term in office. 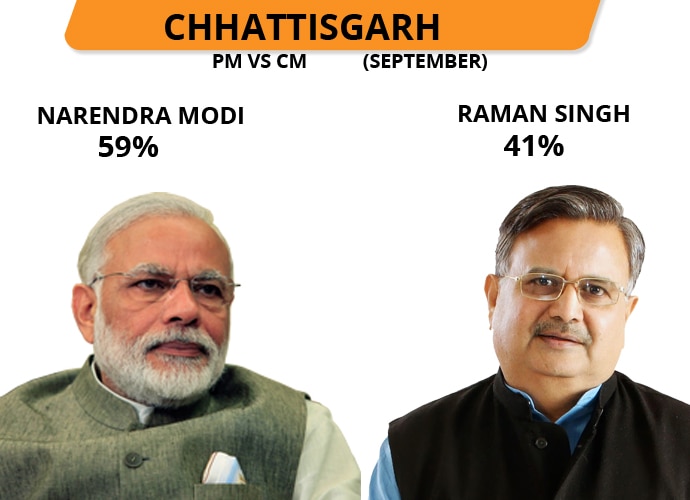 The minimum gap between the popularity of the BJP’s Chief Ministerial candidate in these states and that of the Prime Minister is 10% and the maximum gap is 22% — which means it is likely that the image and performance of the Prime Minister will help the BJP perform better in the Lok Sabha Polls than in the assembly elections.

For the BJP, the 2014 general election results represent the peak of Narendra Modi’s popularity and the Axis My India exit poll indicates the depth to which the party can fall in 2019. Realistically speaking, repeating the highs of 2014 after five years of being in power is highly improbable. The extent to which the BJP is able to stem the decline in the Hindi heartland will determine how steep the 2019 asking rate is for the party in areas outside the core strongholds of the BJP.

Also Read: The BJP has a real problem in the Hindi heartland