For them, the nation is always secondary and not first, and the fulfilling of her interests tertiary or non-existent.

The infatuation of Indian communists with "internationalism" at times borders on the absurd or simply reveals their out-of-depth status in India. This obsession with "internationalism", which I have termed as the "Comintern syndrome", sees Indian communists come up with the most ludicrous and insensitive statements, ideas or actions right in the midst of a crisis or challenge which India and the Indian state is trying to handle with great dexterity and determination.

Like Alzheimer's afflicts memory and renders the immune system and the discerning powers weak, the Comintern syndrome also blurs the power to reflect and to rationalise, it acutely affects the capacity to feel connected to one’s mother country or to understand her national interest and prevents one from advocating the need for its fulfilment.

The Comintern syndrome, in short, de-rationalises, de-nationalises and de-links and always compels the one afflicted with it to side with India’s adversaries, with those whose compelling aim is to see her dissolved, dismembered and disintegrated.

Comrade Sitaram Yechury’s recent bombast, insisting that we must hold talks with Pakistan and that it is India’s responsibility to ensure that there was no escalation and that peace prevailed in the area, coming as it did just around the time when constable Nitin was martyred trying to foil a terrorist attack on the Army base at Baramulla, is the manifestation of the Comintern syndrome.

His ideological ancestors too have fallen victims to that syndrome ever since the Communist Party of India was founded in Tashkent!

The position that Indian communists took during the 1942 Quit India movement – in fact in a secret memo to the then British home member in the viceroy’s council, PC Joshi, had termed the entire movement a "national suicide" – their  call to armed rebellion against free India in the aftermath of Independence and their kowtowing to Chinese and Soviet communist parties and allowing them to set the agenda for their Indian operations are all the expressions of that acute affliction, syndrome or malady.

In fact, right up till 1955, the Indian communists refused to accept that Independence had come. The then CPI’s mouthpiece, The People’s Age, for example, described the advent of freedom as "sham freedom" in line with the Cominform’s own mouthpiece which dubbed India’s freedom as a "sham independence bestowed on India".

Remember how the CPI’s policy review "proudly" argued that the party had "separated" itself from the August 9 struggle – that is, Quit India.

The report also noted how it had unfortunately termed Gandhi as "anti-fascist" and should have instead denounced him as a "leader whose movement sought to exploit fascist invasion of India." Of course, the communist role during the 1962 Chinese aggression has been well documented and discussed – such treacherous behaviour is rare perhaps even in the annals of world history.

A question may be asked at this juncture: Are Delhi chief minister, Arvind Kejriwal, and P Chidambaram, the once "formidable" home minister of the Indian Union, both suffering from the Comintern syndrome, since they have both raised doubts over the operations valiantly carried out by the Indian forces?

The answer is an obvious no – the Comintern malady only afflicts those who have had some ideological nurturing or understanding. The Indian communists – despite their rapid de-idelogisation still have some vestiges of it left. At least for purposes of theoretical discussions and for cobbling up tactical, read opportunistic, alliances ideological angles are bandied about.

For the likes of Chidambaram and Kejriwal, whose primary political raison d’être is survival and opportunism, the Comintern malady does not affect. 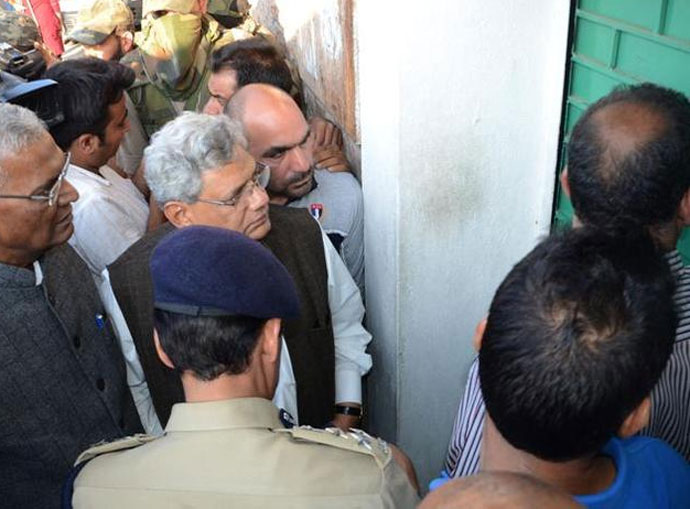 Yechury’s evening walk to Geelani’s house in Srinagar and his offer of talks on behalf of god knows whom is a sign that Comintern malady has made deep inroads in him.

Their calculated aspersions on our armed forces – calculated because they know well that such buffoonery will be lapped up by a section of the Paki-Talibani audience back in Pindi or Islambad – and on the prime minister is the expression of plain lumpenism – in case of Kejriwal it is political lumpenism and in the case of Chidambaram it is intellectual lumpenism.

These, therefore, need not be taken too seriously and if at all taken note of, may be dismissed as manifestations of intellectual and political thuggery.

But lest I digress, from jumping to the defence of the "Bharat ki Barbadi" types in JNU, to knocking at the doors of separatists whose only slogan and world-view revolves around "go back India" to justifying cries of "Pakistan Zindabad" on India soil, to hectoring India on the need to de-escalate and initiate talks with a recalcitrant neighbour whose seule raison d’être is the end of India, Indian communists and especially their senior ideologues and leader don’t cease to surprise or exasperate.

Comrade Yechury’s evening walk to Geelani’s house in Srinagar and his offer of talks on behalf of god knows whom, his recent insistence that India hold talks with Pakistan when the latter just massacred our jawans, his hesitant acceptance of the surgical strikes are signs that the Comintern malady has made deep inroads in him – the only permanent solution perhaps is a permanent withdrawal from public life or at least a sabbatical which can see a systematic treatment being undertaken.

For that matter, almost the entire CPI(M) politburo, and the leaders of its marginal affiliates is afflicted with this syndrome and is in need of urgent and immediate treatment.

Indian communists are passing through their worst phase. In the last few years they have been incapable of attracting fresh blood while seeing their numbers dwindle. Internal squabbles under the garb of ideological debates have generated intense confusion among the rank and file, its unabashed kowtowing to the Congress – and in it especially to the family, its whiling away time in the name of inane and calcified debates – such as "is India a fascist or an authoritarian state" – has seen it badly drift.

Indian communists find it hard to internalise the fact that India is witnessing one of the most decisive periods of leadership in nearly three decades under Prime Minister Modi, a man they had, till the other day, dismissed as someone who will never be able to win or command a national mandate.

In a sense, the decline, confusion of Indian communists augurs well for the health and future of the Indian polity as a whole, but such a state of drift has also clouded their leaderships’ capacities for clear thinking and deliberation.

Unfortunately, despite all their verbosity and access to the so-called higher intellectual echelons, Indian communists have never evolved a true understanding of India and have always desisted from dispassionately and unequivocally articulating her national interest.

For them India is always secondary and not first, and the fulfilling of her interests tertiary or non-existent. The entire basis of their politics has essentially been this neglect of India.

Interestingly, comrade Yechury’s ongoing volley of gratis advice on what India should do brings to mind the words of Khasa Subba Rao, that intrepid patriot-journalist, freedom fighter and founder editor of the Swarajya.

Writing his column in the Swarajya in the context of the Chinese aggression, Rau caustically observed, that Indian communists were a "special brand of dangerous nationals to beware of, fit only to be distrusted and guarded against incessantly for some chronic betrayal or other of the country’s interests and security."

Five decades down the line nothing seems to have changed, as comrade Yechury’s homilies show.

Post your comment
#Surgical strikes, #Pakistan, #CPM
The views and opinions expressed in this article are those of the authors and do not necessarily reflect the official policy or position of DailyO.in or the India Today Group. The writers are solely responsible for any claims arising out of the contents of this article.