Mukhtar Abbas Naqvi: 'Muslims will vote for BJP in huge numbers this time. Muslims know under Narendra Modi, their empowerment is safe'

Senior BJP leader Mukhtar Abbas Naqvi spoke with Rohit E David about the Congress' manifesto, the NYAY scheme, AFSPA and why he thinks Muslims are happy with the saffron party.

Senior BJP leader Mukhtar Abbas Naqvi spoke with DailyO on the Congress manifesto, waving off farmers' loans — and what Muslims think of the BJP:

Q. What is your verdict on the Congress manifesto?

The Congress cannot convince the common masses of their agenda — that's why they want to confuse everyone. Somewhere, they wanted to also send out a message that the Congress is soft towards separatists.

They have given a complete lollipop to the Indian people.

Q. But Rahul Gandhi is saying that with his NYAY scheme, he will give Rs 72,000 per annum to ever poor family — how realistic is this?

It is a political fraud and nothing but that. This is impossible — they also know that what they are promising can never be done. Q. The Congress also plans to open an anti-corruption case against the Rafale deal — what’s your take on that?

Well, there are very serious charges against the Congress party and their family members. The party is simply trying to divert the attention of everyone against all this.

Q. Can the Congress win elections by waving off loans to the farmers?

Recently, elections in three states took place — there, the party had said that they will wave off loans of farmers. They haven't done that — they have not fulfilled their promises. In a nutshell, their government is not even coming, so the question doesn't arise if they will fulfill any promise or not. 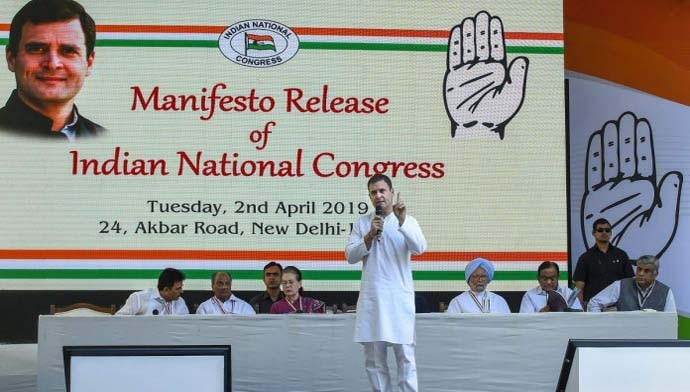 Congress has said it will come to power — and it will start a probe on the Rafale deal. (Source: PTI)

Q. But the Congress has pledged to dilute the Armed Forces Special Powers Act (AFSPA) in Kashmir — what’s your view?

It's a separatist and terrorist-friendly move, in my view, and completely against the nationalist spirit of our national security.

Q. What do Muslims have to say when it comes to the BJP though?

Muslims will vote for the BJP in huge numbers this time — they know that under Narendra Modi, their social, economical and educational empowerment is safe.

We believe in development with dignity. Their is no sense of fear amongst the Muslim community when it comes to the BJP. The party has already given tickets in the coming General Elections to six Muslim candidates.

We are a pro-Indian party — Muslim and Hindu has never been on our agenda. The BJP will come back to power.

Read more: Taking a pro-Modi stand: Why we are running the Academics4NaMo campaign