It is very well to talk about Muslim plight, issue tweets and statements, but it takes guts and a lot of moral courage to fight communal forces on the ground.

The row following Rahul Gandhi’s meeting with a group of Muslim intellectuals is refusing to die down. With barrister Asaduddin Owaisi urging Muslim youths to be "master of their destiny" (read this as an appeal to vote for Muslim parties like the AIMIM), the build-up has a potential of affecting the 2019 Lok Sabha polls.

Deep down in the community, there is growing disillusionment with mainstream political parties. This sense of dejection is not without a reason.

Senior Union ministers like Nirmala Sitharaman have wondered if the Congress wants to "contest the 2019 elections based on religion". Prime Minister Narendra Modi too touched upon the subject at Azamgarh recently when he said, “I read in the newspapers that naamdaar (entitled [Rahul Gandhi]) said the Congress is a party of the Muslims. I am not surprised... When the previous prime minister was in charge, he said openly that the first use of natural resources should be with Muslims."

Randeep Surjewala, AICC head of media, sounded every bit defensive when he insisted that the Congress was a party of 125 crore of Indians.

Muslims are stunned by these utterances and remarks that implicitly dub Muslims as a sort of political pariah.

There are some basic truths that need to be told here. Firstly, no group of persons numbering 15 to 18 can claim to represent Muslims. The Muslim craving in the system of democracy is no different from others in terms of adequate political participation, jobs, education, a sense of security, the need for infrastructure — bijli, paani, sadak, healthcare, etc. 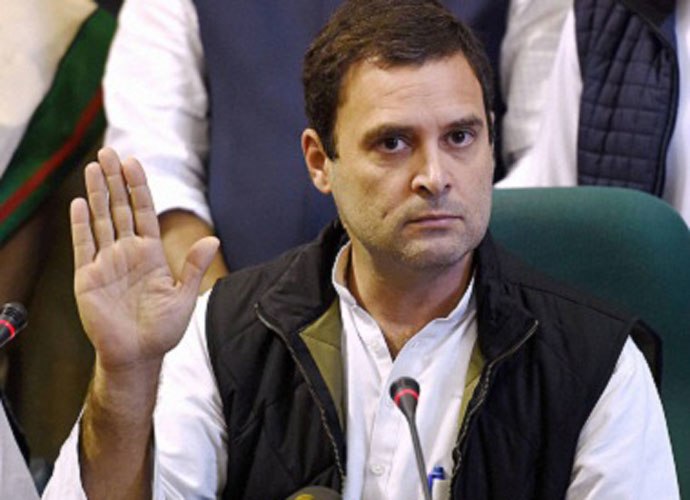 It is nice to hear Rahul Gandhi say that he stands with the last person in the line. Sadly, he sounds hollow. (Image: Twitter)

As I wrote in a paper on countering violent extremism, communalism is a causative factor responsible for the low representation of Muslims in Parliament and state Assemblies. Fewer and fewer Muslim candidates are being given tickets to contest elections by major political parties. There is a growing sense of a majoritarian worldview. Lynching incidents may have been sporadic, but these have created panic and a degree of alienation. Widespread prevalence of false and fake news on WhatsApp, arrests of innocents on charges of sedition, the selective use of law, deteriorating socio-economic indicators, unemployment and a general sense of despondency among Muslims is pointing to a situation that may trigger something obnoxious.

Political parties, politicians, talking heads, academics and other thinking members of society need to pause and wonder why a large number of Muslims chose to stay back in India when Pakistan was created.

This was a question delicately addressed in MS Sathyu's epic Garam Hawa. Like the rest of their countrymen, Muslims have deep roots and a sense of belonging. My grandfather used to say that staying back was an act of faith for him. The emotional state of Salim Mirza of Garam Hawa, deftly played by Balraj Sahni, is true of many Muslims of today. The rootedness is a constant companion of their resilience. The emotional state of Salim Mirza of Garam Hawa deftly played by Balraj Sahni is true for many Muslims of today. [Screengrab]

A word about Rahul Gandhi’s Congress: It is very well to talk about the Muslim plight, issue tweets and statements, but it takes guts and a lot of moral courage to fight communal forces on the ground. It is nice to hear Rahul Gandhi say, "I stand with the last person in the line. The exploited, marginalised and the persecuted. Their religion, caste or beliefs matter little to me. I seek out those in pain and embrace them. I erase hatred and fear. I love all living beings. I am the Congress."

But it is also a fact that in various lynching incidents, communal riots and recent mob violence, Congresspersons or the party's "Sadbhavna Ke Sipahi" never figured among those injured while trying to avert a tragedy at Satna, Alwar, Bidar, Muzaffarnagar, Ramgarh and other places.

Here are the two instances that should interest Rahul Gandhi’s Congress.

During the 1947 communal disturbances, noted freedom fighter Subhadra Joshi was ill and hospitalised at Kingsway Hospital in Delhi. Mahatma Gandhi came to see her and asked Joshi how many innocent lives had been lost in Delhi due to the communal violence. When Joshi speculated that the figure could be more than a thousand, Gandhi asked if this included some peace-workers too. Joshi recalled that Gandhi was dismayed to hear her reply - "none" - and he wondered how he could believe that she and the other peace-workers had tried to save innocent lives.

"When I argued that we tried to stop the violence, but the police just did not listen, Gandhiji retorted, 'What is this I am hearing! You faced the Britishers’ bullets and now you say you cannot manage your own police?'"

For actor Prithviraj Kapoor, secularism was a subject extremely close to his heart. In fact, it was a way of life for him. Pathan, the most critically acclaimed play produced by Prithvi Theatre, made a passionate plea for communal harmony. Kapoor staged the play for the Congress Working Committee (CWC), the apex decision-making body of pre-independence Congress party. When the curtains came down with, “Hum ek the, hum ek hain, hum ek rahenge,” Sardar Vallabh Bhai Patel, a towering nationalist, was deeply moved. Patel reportedly told Kapoor that his play conveyed with one show what the Congress was not able to do for two years. The country was sharply polarised by communal hatred and distrust on the eve of the country’s Independence. Sardar Patel sat through the play, though he had merely come to put in an official appearance. He later spoke extempore for over half an hour after the play and everyone heard him in rapt attention. (Dayal Jai: I Go South with Prithviraj and his Prithvi Theatre, Prithvi Theatre, 1960)

On one occasion, Prithviraj Kapoor was travelling and had a spat with Rashtriya Swyamsewak Sangh's (RSS) influential ideologue, Guruji MS Golwalkar, who was released from jail. They met at Khandala station between Bombay and Pune. Even as RSS enthusiasts were raising some provocative slogans, Kapoor entered the train compartment and gave Guruji a lecture on the need to rein in his men. “There is only one chair and so many want to sit in it. There is so much scramble for it that not only will many bones be broken, but also the chair itself will be smashed,” Prithviraj spoke metaphorically, adding, “In politics, discipline is absolutely essential and your crowds are witness to the utter lack of it.”

#BJP, #Rahul Gandhi, #Muslim party row, #Congress
The views and opinions expressed in this article are those of the authors and do not necessarily reflect the official policy or position of DailyO.in or the India Today Group. The writers are solely responsible for any claims arising out of the contents of this article.