The Congress is having a breakdown facing political life without the direct running of the Gandhis. There are very important lessons for other political parties here.

In the United States, 20 Democrats are slugging it out on television and on the campaign trail for the right to challenge President Donald Trump in the 2020 US presidential election. They include 76-year-old Joe Biden who served as former president Barack Obama’s vice-president from 2009-17.

Also in the mix is first-term Californian lawmaker Kamala Harris, the telegenic daughter of the late Tamilian medical researcher Shyamala Gopalan and mixed-race Jamaican academic Donald Harris. Then there’s Senator Elizabeth Warren, who for long claimed to have been from native American Indian descent before withdrawing the statement following a DNA test. She is rapidly climbing the poll numbers along with Kamala Harris.

The feisty bunch competing to take on Trump next year includes the openly and proudly gay 37-year-old Pete Buttigieg, former mayor of South Bend, the fourth largest city in Indiana. 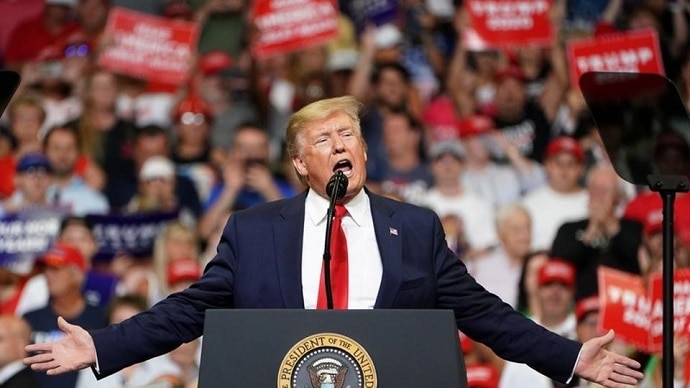 He's got opposition: A group of feisty contenders are gearing up to challenge US President Donald Trump. (Photo: Reuters)

Across the Atlantic, two men, Boris Johnson and Jeremy Hunt, are battling to become the next prime minister of Britain. They are addressing 26 hustings (what we call town halls) where ordinary Britons grill them on policy issues as well as personal quirks (Johnson, in particular, has many).

Meanwhile, back home in India, a cry-baby Congress party is undergoing a meltdown.

Individuals going through an emotional crisis can at least take psychiatric help — but when a 134-year-old political organisation undergoes mass trauma, there’s little anyone can do.

The spectacle of Congress leaders begging Rahul Gandhi to stay on as party president, prostrating themselves outside his residence, and resigning en masse from party posts is a live demonstration of what ails India’s feudal political families. It took Gandhi’s open letter attached to his tweet to finally convince the Congress that he meant what he has been saying for over a month.

He means it. Deal with it, Congress. (Photo: PTI)

Family-run political parties have lowered the standard of public life. Congress loyalists are petrified of life after the Gandhis despite knowing that, even when the Gandhis don’t hold an official position in the party (as between 1991 and 1998), their writ runs large and loyalists are protected.

What the party faithful fear is that self-destructive competing factions will spring up if the Gandhis retreat too much into the background. Sonia Gandhi is reportedly unwell and unable or unwilling to take charge. Priyanka Gandhi Vadra apparently has flattered to deceive. The new non-Gandhi Congress party president (obviously to be chosen, though discreetly, by the Gandhis), will be a non-entity who cannot challenge the Gandhis’ long-term ownership of the Congress.

That delivers the worst of all outcomes — a demoralised, semi-headless party ahead of key Assembly elections and mounting defections as the Congress’ prospects for the 2024 Lok Sabha election dwindle even further.

The reality from which most Congress leaders flinch is that their party’s dependence on one family over the decades has ruined it.

Other political parties that have copied the Congress’ feudal-family business model have suffered too. 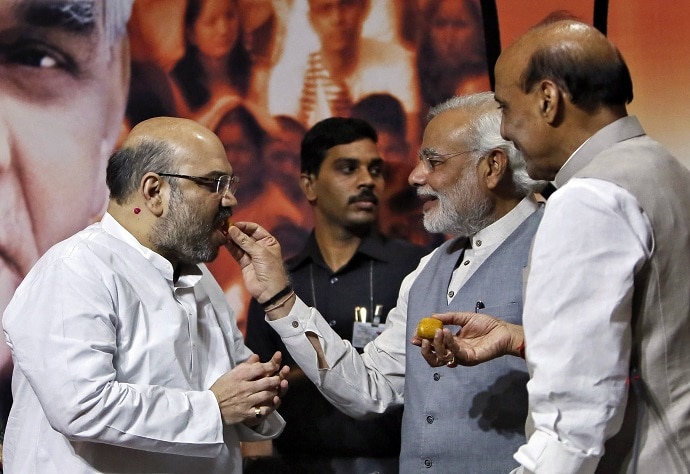 Keeping it sweet: The BJP knows better than to mix family with politics. How long will it stay that way? (Photo: Reuters)

The writing is clearly on the wall. Not many feudal politicians though want to read it. The BSP’s Mayawati has appointed a brother (Anand Kumar) and a nephew (Aakash Anand) as national vice-president and national coordinator respectively.

Despite the gathbandhan with the SP and RLD, the BSP could win only 10 of the 38 seats it contested in Uttar Pradesh in the 2019 General Election. Instead of learning lessons from the dynastic meltdown of family-owned parties, Mayawati has doubled down on family. The results will likely show in the 2022 UP Assembly poll and the 2024 Lok Sabha election.

Whenever nepotism raises its feudal head, electoral disaster usually follows — with a time lag. The BJP was once proud to be non-dynastic. Atal Bihari Vajpayee’s foster family and LK Advani’s son Jayant and daughter Pratibha rightly kept themselves out of electoral politics.

But the virus is beginning to spread.

The arrest and subsequent bail of Akash Vijayvargiya, the BJP MLA from Madhya Pradesh and son of the BJP’s National General Secretary Kailash Vijayvargiya, for beating civic officials with a cricket bat is an early warning for Prime Minister Narendra Modi — keep families out of the BJP.

There obviously will never be a Narendra Modi dynasty. His brothers and mother lead quiet, middle-class lives in Gujarat. But there should never be an Amit Shah political dynasty either, nor a Rajnath Singh dynasty. Even at lower levels, in the states and councils, the unyielding effort must be to promote merit.

Let the sons and daughters, nephews and nieces, brothers and sisters, find and shine in their own professions.

If Sonia Gandhi had encouraged son Rahul to do that before parachuting him in 2004 at the age of 34 in Amethi, the Congress would not be facing the nervous breakdown it does today.

Also read: When netas beat us up: Why BJP's Akash Vijayvargiya and other politicians like 'justice', Sanjay Gandhi-style

#Dynasty politics, #Narendra Modi, #Congress president, #Priyanka gandhi vadra
The views and opinions expressed in this article are those of the authors and do not necessarily reflect the official policy or position of DailyO.in or the India Today Group. The writers are solely responsible for any claims arising out of the contents of this article.