What’s wrong with the Congress?

India Today Editor-in-Chief talks about the existential crisis in India’s oldest party and the road ahead, in the August 3, 2020 edition of the India Today Magazine.

In December 2002, while travelling with Narendra Modi on his campaign for his first state election in Gujarat, I was taken aback when in our casual chat he said: “Do you know the biggest tragedy of recent Indian politics is the decline of the Congress as a national party? The country would have been better off with two pan-national parties.” Little did I, or perhaps even he, know at the time that he would be the one to push them into insignificance. That’s not his fault. It is what opposing parties are supposed to do to each other. However, a robust Opposition is central to the functioning of a vibrant democracy. It presents a viable alternative to the incumbent government, promotes responsible debate and democratic discussion and holds the government of the day to account for its omissions. Without it, democracy would be dysfunctional.

This is why, exactly a year ago, we asked whether India’s principal opposition party could rise from the ashes. A year later, the prognosis remains as grim. The party continues to be adrift, still unable to digest the shock defeats of 2014 and 2019 when it won 44 and 52 seats, respectively.

Any political party rests on three pillars— leadership, organisation and ideology. The Congress at present has confused leadership. Nobody knows who is in charge. Historically, the Congress was an umbrella party that accommodated people with different beliefs. With the increasing polarisation of Indian politics, it lost most of its vote-banks since the 1990s. First came Mandal that promoted caste identities, and it lost its Dalit vote to the BSP, the OBC vote to the SP and RJD. This was followed by the Mandir agitation, and the Hindu nationalist vote went to the BJP. The Congress was left with no coherent vision to present to the electorate. It said it was for the poor, but so did the BJP; the latter also aggressively took over the nationalism plank.

Unlike the cadre-based BJP, the Congress is a party of volunteers, whose biggest glue is power. Without power, Congressmen tend to seek greener pastures, or just wither away. This is not a sudden development. The party has steadily been losing states, which are where grassroots organisations are built. It lost Tamil Nadu in the late ’60s, West Bengal in 1977, Bihar, UP and Odisha in the ’90s. These are states it has never won back. In Gujarat, the Congress has been out of power for almost 30 years barring a coalition government for two years. With this kind of record, it is no surprise that the organisation is in shambles even as it is confronted with a disciplined cadre of the BJP which now has a membership of 180 million. 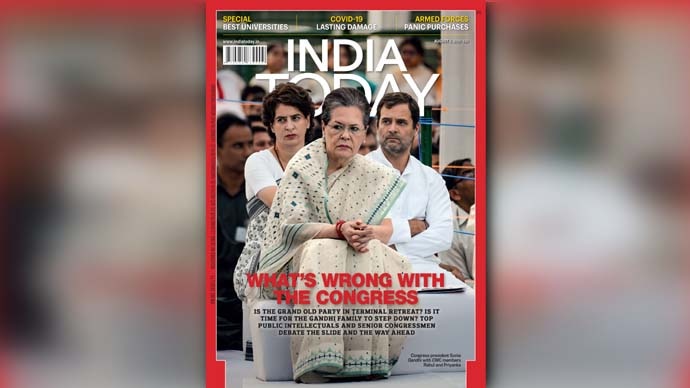 The party’s three-fold crisis—ineffective central leadership, crumbling organisation and lack of ideology—only seems to be worsening. Its over-reliance on the Gandhi family, the only glue that once held the party together, has proved to be its undoing. An ageing Sonia Gandhi cannot create the magic she used to a decade ago. Her term as interim Congress president comes to an end on August 10 and there is no clarity on who will succeed her. Priyanka Gandhi has confined herself to Uttar Pradesh and is untested. Rahul Gandhi has been tested and failed. He stepped down as Congress president a year ago and now inhabits a strange netherworld, a one-man demolition squad raging mostly against Prime Minister Narendra Modi on social media.

Finding a new president is crucial as the Congress needs to regroup fast to gain lost ground. Party leaders are only as good as their organisations. Narendra Modi vaulted to power from Gandhinagar to New Delhi because of a formidable party network and the RSS cadre. Even after being out of power for six years, the Congress’s organisational network remains a mess.

With the disarray in the central leadership, it is left to the regional satraps to fight lonely battles against the BJP. Over the past year, the party has been caught leaden-footed as the BJP engineered defections to bring down governments in Madhya Pradesh and Karnataka. Its fate in Rajasthan, the biggest state the party rules by itself, now hangs by a slender thread. It is riven by the rivalry between the old guard and the new leaders, with the family uncertain on whom to back. The party is losing promising young leaders in quick succession—Jyotiraditya Scindia quit in March and joined the BJP. In Rajasthan, Sachin Pilot is on his way out.

In the past year, the party has lost no opportunity to lose an opportunity to tell the people what it stands for. It has no answers to the pandemic. It has neither been able to craft an alternative narrative nor hold the government to account for its handling of the migrants during the lockdown. The ongoing stand-off with China in eastern Ladakh was another opportunity for the Congress to responsibly question the government over its failings, which it seems to have lost. Even before the corona crisis, the Congress was unable to exploit the issues of the declining economy and rising joblessness to its advantage.

Our cover story, ‘What’s Wrong with the Congress?’, written by Senior Editor Kaushik Deka, looks at the existential crisis in India’s oldest party and the road ahead. We reached out to a panel of public intellectuals, politicians and Congressmen to tell us if the party is indeed in terminal decline and what is needed to revive it. Voices range from Congress MP Shashi Tharoor to French political scientist Christophe Jaffrelot, senior Congress leader Salman Khurshid, former Assam CM Tarun Gogoi, socio-political activist Sudheendra Kulkarni, Congress spokesperson Manish Tewari, Ashoka University professor Mahesh Rangarajan, political scientist Zoya Hasan, Congress spokesperson Randeep Surjewala and political scientist Suhas Palshikar. The 300-pound gorilla in the room was the question whether the Congress can survive without the Gandhis. All our panellists believe it won’t. Kulkarni put it best: “The family is indispensable for the party. But it has become dispensable for the nation.” With so many talented and experienced people in the Congress, it is a pity that despite being in power for 54 years since Independence it has no one beyond the Gandhis with a national reach and multi-state following. It is a sad state for Indian democracy to be in to have no worthwhile Opposition.

(India Today Editor-in-Chief's note for the cover story, What’s Wrong with the Congress, for August 3, 2020)

Also Read: Can a resurgent Congress build on the handsome victory in the Hindi heartland?

#Nehru-Gandhi family, #Rahul Gandhi, #India today magazine, #Congressincrisis
The views and opinions expressed in this article are those of the authors and do not necessarily reflect the official policy or position of DailyO.in or the India Today Group. The writers are solely responsible for any claims arising out of the contents of this article.