Under which model did Congress government snoop on Subhas Bose's family?

But what was the interest of the authorities in knowing about a "dead" man such as Netaji?

The Congress party's outrage at Delhi Police visiting Rahul Gandhi's residence and asking about him is quite understandable. It is also understandable that the party thinks it is a case of "political espionage" or some sort of #Snoopgate.

But what is not understandable is the party's charge, as articulated by the spokesperson Abhishek Singhvi, is that "this kind of political espionage, snooping and surveillance, this kind of intrusion into political opponents' life - this may be Gujarat model. It is not India's model".

Records now available in the National Archives in New Delhi, thanks to the efforts made by this writer and friends, and at Kew in the United Kingdom establish without any iota of doubt that from the late 1940s to 1960s - the golden era of greatest Gandhians, democrats and Bharat Ratnas Jawaharlal Nehru and Dr BC Roy (chief minister of West Bengal from 1948 to 1962) - members of Subhas Bose's family were subjected to "espionage, snooping and surveillance" and more.

Freedom fighters in their own right, sons of Subhas' elder brother Sarat Bose, Amiya and Sisir, one a barrister another a famous paediatrician, both future lawmakers, died ever knowing that files carrying their names had been kept by director, Intelligence Branch, West Bengal. Since the Intelligence Bureau in Delhi was supplied with copies of reports concerning brothers and that there is at least one report from CID, Madras, in one of the files about Sisir Bose's movements, it can be fairly concluded the entire operation was pan-Indian and carried out at the behest of New Delhi. 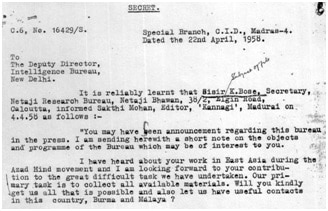 As if this is not enough, records from the United Kingdom show that the fruit of the illegal surveillance mounted on Amiya was shared by the Intelligence Bureau with our former masters. Loyalty indeed knows no bounds. The following IB record dated October 6, 1947 comes from an MI5 file declassified a few months back. 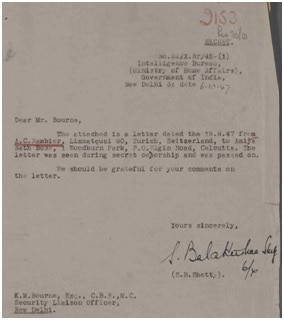 As part of this elaborate surveillance, the movements of Bose brothers - who were not of any significant political consequence by themselves - were watched and the details put on record. Things were rather meticulous in the good old days when direct disciples of Mahatma Gandhi were running the nation. One record reads that in 1960s Sisir visited Taipei - where his uncle Subhas had reportedly died in 1945 - and "met Mr Sih Shon-Heng, director of European department, ministry of foreign affairs and had discussions with him on a 'very important subject'".

Appended in the Intelligence Branch file on Amiya were numerous records concerning his movements. Some pertained to the period when Amiya was a Lok Sabha member. 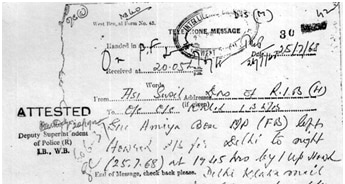 The copy of a security control officer's report dated October 6, 1957 regarding Amiya's visit to Japan seen here was CC-ed to the IB: 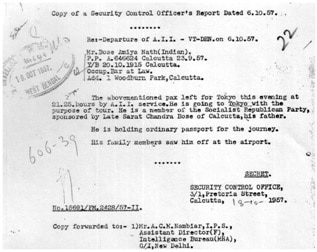 So thorough was the interception that letters from brothers' acquaintance in Japan, Europe and America - like historian and Netaji biographer Leonard Gordon and a Kolkata journalist - were opened, read and copied. In other words, what they told us happened in America during the Watergate era was the usual thing in India much earlier.

The contents of some of the records reveal why the authorities were miffed with the brothers. Writing to his aunt Emilie Schenkl Bose on July 14, 1955, Sisir made a snide remark: "If you were in India today, you will get the feeling that in India's struggle two men mattered - Gandhi and Nehru. The rest were just extras".

"Gandhi was not a saint," Amiya Bose put it more bluntly on December 7, 1958 to German industrialist Carl Vincent Krogmann.

"Gandhi's theory of non-violence has practically no influence in India today. If India is attacked, she will be defended by her Army… Gandhi's movement of 'non-violent non-cooperation' did not bring independence to India. The movement he started in August 1942 was smashed by the British government in a few months… The immediate cause of British withdrawal was the INA trial held in Red Fort."

On Sunday the official Twitter handle of the Indian National Congress retweeted Shashi Tharoor's tweets, one of which claimed that the "original #Snoopgate involved misuse of Gujarat Govt machinery for surveillance of woman".

Well, could you even contemplate the sacrilege of Gujarat authorities snooping on Kasturba Gandhi, assuming she were living in 1952? From the Bengal Intelligence Branch file here's a shocker: Emilie Schenkl Bose's letter to her nephew Sisir discussing personal family matters. 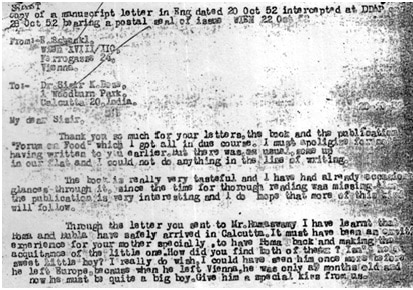 Of course Netaji figured heavily in the correspondence. The focus was him. But what was the interest of the authorities in knowing about a "dead" man? An intercepted letter of Sisir provides the answer. The intelligence sleuths wanted to know what the family thought of Subhas Bose's death, which they themselves evidently didn't believe in: 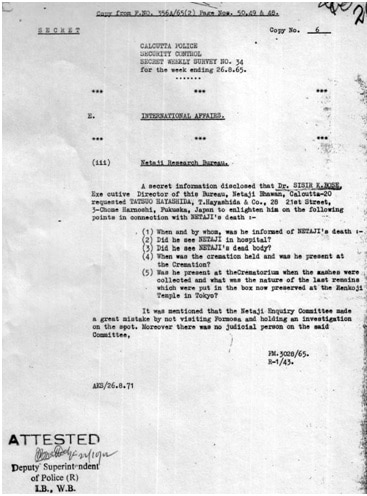 Sisir would eventually join the Congress party and that explains his subsequent support of the official version of the air crash theory of Netaji's death he had himself questioned. It also explains, in part, the inability of his most eloquent and well-connected Harvard historian son professor Sugata Bose, a Lok Sabha MP to boot, to raise the voice about the need for declassification of Subhas Bose related files, including those involving snooping on his family members.

Post your comment
#Netaji, #Netaji Subhas Chandra Bose, #Snoopgate
The views and opinions expressed in this article are those of the authors and do not necessarily reflect the official policy or position of DailyO.in or the India Today Group. The writers are solely responsible for any claims arising out of the contents of this article.