Because he probably doesn't know it exists.

I'm not talking of some godforsaken part of the state of West Bengal that no one has ever been to or seen.

This "exotic" place that is the northern part of Bengal sees all big names paying a visit once in five years, because that's when they need to promise development and votes.

That's when Mamata Banerjee comes and declares she will turn Siliguri (in north Bengal for all of you who think Bengal is all about Howrah Bridge and Roshogolla) into "Switzerland".

And then goes back to Kolkata, and we go back to making peace with the false promises. So when West Bengal tourism puts out a video extolling the virtues of Bengal, asking you to "experience" it, the "sweetest part of the country", sitting in Noida I can't help but see my blood boil.

This is certainly not even the most picturesque parts of Bengal, to hell with propriety.

When you see Shah Rukh Khan asking you to experience Bengal, you would want to see the other, oft-neglected parts of Bengal too. The places that lie beyond an average south Bengal-resident's idea of Bengal: Darjeeling.

I was born in a place called Cooch Behar. We travelled all of India before I was 15 years old, thanks to a family that prioritised travelling over eating.

When people from Bangalore to Delhi asked us where we were from, and we said West Bengal, the next question would inevitably be, "Calcutta?" Our answer "Cooch Behar" was always met with looks of incredulity, and the occasional counter-question, "That is not in Bihar?" The mandatory introduction to the foothills of the Himalayas, Maharani Gayatri Devi's birthplace and the tea gardens of Dooars followed, and we moved on.Another year, another place. Another round of the same explanation.

We were asked the same questions by people in Calcutta too. That's when it struck me. We belong to a part of the state not only does no one in the Bengal capital care about, but most don't even know about.

I have learnt in my 17 years of Cooch Behar what neglect can do to a part of a state. And I shifted to Delhi. Most people back then blamed the CPI(M) government for the unbelievable state of the districts in north Bengal. After Trinamool Congress (TMC) with Mamata Banerjee as its leader came in power, we thought things will get better. 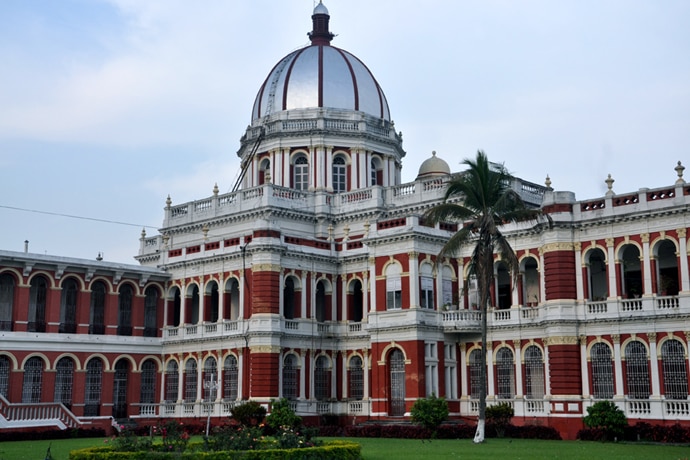 Till today, when I want to take a flight to get home, I shudder at the journey. It involves a two-hour flight, followed by a cab ride to the Siliguri bus stand, an AC bus to Cooch Behar from there if I am lucky; else a state transport bus which can put a bullock cart to shame as far as a bumpy ride is concerned.

That is perhaps what the West Bengal tourism department doesn't want you to see.

So it goes ahead and creates a video asking you to experience Bengal, makes a superstar like Shah Rukh Khan (the brand ambassador of West Bengal tourism) say it is the sweetest part of India, without for once telling you what lies beyond the Howrah Bridge and the Bishnupur temples and Purulia's Chhau and Digha and Mondarmoni's beaches and Bankura's terracotta horses. Chasing the sunset by the Torsha. Photo credit: Arabinda Bhattacharya

Now pay attention: in this 3-minute-21-second long video, 18 *long* seconds are earmarked for north Bengal. You have a shot of the tea gardens, followed by a place that you're supposed to identify as Darjeeling because hey, can't you see the girl is feeling cold?

That's precisely what north Bengal is to the brains sitting in AC offices in Kolkata and landing a "dream contract" of designing a video with Shah Rukh Khan to show the world what West Bengal is all about. Dooars: At the foothills of the Himalayas Photo credit: Arabinda Bhattacharya

The department of tourism sure has created other ads showing Dooars and north Bengal prominently, but there's no Shah Rukh singing "Ami Chini Go Chini". You see those ads, and you forget these exquisite places. Unlike actually visiting them.

West Bengal has the Buxa Tiger Reserve where people go to see the one-horned rhino, elephants, bison, deer, leopards and many migratory birds which you don't see in the video.

West Bengal (now) houses a place called Cooch Behar which happens to have a palace which is centuries-old, and was an independent kingdom before Independence.

West Bengal has a five-century old Shiva temple in Jalpesh and a 250-year-old one in Baneshwar.

West Bengal has Makaibari which sends its tea to the US, which you then buy for an exorbitant amount of money because it sounds exotic and tastes fabulous.

West Bengal has Siliguri which Mamata Banerjee vowed to transform into "Switzerland" all those years ago.

#SRK, #West Bengal, #Cooch Behar
The views and opinions expressed in this article are those of the authors and do not necessarily reflect the official policy or position of DailyO.in or the India Today Group. The writers are solely responsible for any claims arising out of the contents of this article.