Tejashwi Yadav and Chirag Paswan must consider doing politics in New Delhi since they are no longer available or required in Bihar.

History will never forget the likes of Tejashwi Yadav and Chirag Paswan who chose to stay in the comforts of their Lutyens’-zone bungalow in Delhi, while people from Bihar undertook one of the most arduous and challenging journeys of their lifetimes. Bihar has a special place reserved in the national imagination in the light of the ongoing pandemic. Migrant workers to the tune of millions are expected to reach Bihar in the course of the next couple of weeks.

Over the last six weeks, Bihar saw unprecedented numbers of migrant labourers returning to their homeland. People from Bihar have a special affection for their families and homes. Anyone who is even remotely connected with the state can recount the amount of difficulty one faces in reserving train tickets during Holi and Chatth.

The apathy of the rulers in the course of the last seven decades has led Bihar into a tough position. Only last year, Niti Aayog ranked Bihar at the bottom while examining states on the UNSDG index, on the parameters of sanitation, access to education, health, basic infrastructure and so on. Despite having critical centres of three major religions, and the remains of the world’s oldest university in Nalanda, the political class has shown little vision and imagination for the state. 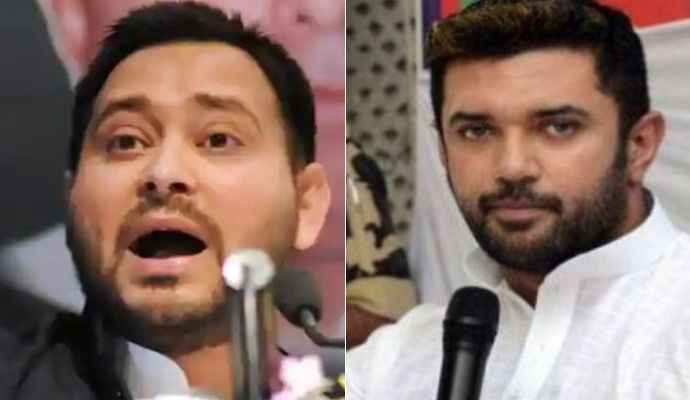 Bihar will remember Tejashwi Yadav (L) and Chirag Paswan (R) for doing nothing except giving sound bites to the TV channels while the state was dealing with the crisis. (Photo: PTI)

India is probably the only country where charity is not pursued as a non-voluntary obligation, but as a matter of social responsibility. The Birla group constructed temples and Tata group built schools and centres of higher learning much before the amendments were made in the Companies Act in 2013 that mandated two per cent of earnings to corporate social responsibility (CSR). Charity runs in the veins of Indians.

As the state was grappling with the coronavirus crisis, students, activists and members of the civil society in Bihar came out in large numbers in Patna, Muzaffarpur, Darbhanga, Nawada and other districts. When the non-availability of blood became a major issue for economically-disadvantaged children suffering from thalassemia, volunteers came forward with not only ration and food, but were also available to donate blood. A large number of individuals and institutions came out and ensured that there was no scarcity of blood for the patients.

But the so-called young leaders of Bihar chose to remain back in New Delhi in the luxury and comfort of their bungalows. It is said that leadership skills are cultivated during the times of crisis. The Emergency led to the growth and development of many leaders, who still dominate the political arena at the regional and national level. Former US President John F Kennedy once said, “The Chinese use two brush strokes to write the word 'crisis'. One brush stroke stands for danger; the other for opportunity. In a crisis, be aware of the danger – but recognise the opportunity.”

And Bihar was fortunate to see the emergence of so many young leaders during this crisis. Young students, researchers and activists were at the forefront. They were at the hospitals donating blood, they were at the Patna bypass road welcoming the incoming migrants with water, glucose and jaggery, and distributing ration. Despite being stopped by the police, their zeal to help and reach out to the needy prevailed. Even the governments, both at Centre and the state, could not anticipate the degree and the magnitude of this level of movement. Regardless, they did whatever could have been done by their institutions.

While the established leadership stayed in the confines of New Delhi, the youth of the Bihar came out and are still coming out. Tejashwi Yadav and Chirag Paswan may still be successful in their power politics through manipulation, but Bihar will remember them for doing nothing except giving sound bites to the TV channels during this pandemic.

Also Read | The politics of bromance: Why Tejashwi, Rahul are singing Ye Dosti