How Covid-19 is questioning the Constitutional fabric of India

The Covid-19 outbreak is perhaps the first instance in Indian history where an infectious disease is testing itself in constitutional waters.

With the pandemic spreading like wildfire, the increasing attempt by the State to flatten the curve seems to be ineffective. Recently, the Prime Minister announced the extension of lockdown. Although an extension is the need of the hour, it will be worse for the economy and the people. More importantly, it will have a significant impact on a spectrum of Fundamental Rights of the people. This is probably the first instance in the history of India where an infectious disease is testing itself in the Constitutional waters.

The Constitution in its Part III guaranteed Fundamental Rights, with Article 21 (Right to Life and Liberty) being a right which cannot be abrogated at any cost. A few rights which have been encompassed under Article 21 through judicial pronouncements or Legislative amendments are Right to Health, Right to Food, Right to Privacy, Right to Livelihood and Right to Education. The current situation poses a new test every day for the executive and the judiciary. For the executive; it is a test to enforce the law of the land, and guarantee the Fundamental Rights provided by the Indian Constitution. For the judiciary, it is the test to uphold those rights which have been denied by the State. In an attempt to uphold and protect the Constitutional fabric, the executive and the judiciary need to constantly re-evaluate the state of affairs.

With the inception of the lockdown, public discourse was shaped around three major rights. These were the Right to Life (wages for self-sustenance), Right to Health, and the Right to Food. States like Delhi, Uttar Pradesh and Punjab in an unprecedented move acknowledged the need for unemployment wages to ensure self-sustenance of the poor. Similarly, the Delhi government in an attempt to guarantee the Right to Health to all individuals, has converted major government hospitals into Covid-19 hospitals.

In many parts of the country, the government time and again assured constant availability of food stock to ration shops. 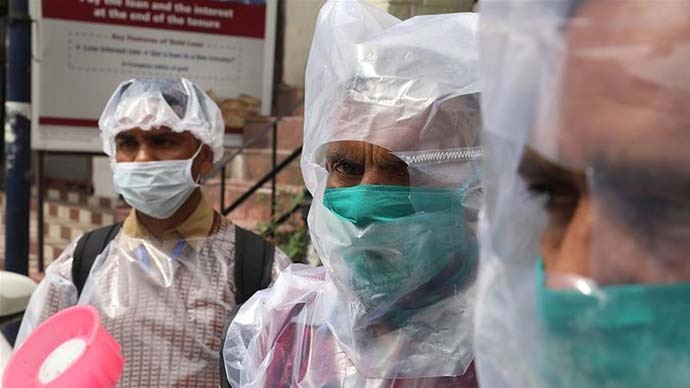 It is a bad situation for healthcare workers who have not been provided with adequate Personal Protective Equipment. (Photo: Reuters)

Despite these efforts, states still struggle to enforce the Fundamental Rights which were once guaranteed by the Constitution and have time and again been upheld by the Judiciary. Recent reports show that the migrants who were not able to leave the city, struggle to get food and shelter. Shelter homes in Delhi are overcrowded, with social distancing becoming next to impossible. In addition to this, the PDS system suffers from a strong implementation failure, thereby violating the decision of PUCL v. Union of India which guaranteed the Right to Food.

In Delhi, reports suggest that one-third ration shops were shut citing unavailability of food. Moreover, many migrant residents in Delhi do not have a BPL card. This is primarily because they did not have a permanent address, thereby making it impossible to avail food grains from ration shops.

Similarly, in Jharkhand, seven lakh households have pending applications for ration cards and cannot avail the benefit of the Public Distribution System.

On the healthcare front, the government suffers from availing adequate testing kits to check patients with Covid-19. The situation is worse for government healthcare workers, who have not been provided with adequate Personal Protective Equipment (PPEs). This raises a pertinent question — who will protect our protectors?

A cross-country narrative shows that over 101 doctors and 30 medical staff have died in Italy – marking unavailability of adequate PPE as one of the causes behind the spread of infection among the healthcare workers. The situation highlights the pertinent issue of Right to Health for healthcare workers.

The Supreme Court, in its landmark judgment of Consumer Education & Research Centre (CERC) and others v. Union of India and others, while enforcing Right to Health of the workers working in a hazardous industry, held that “the compelling necessity to work in an industry exposed to health hazards due to indigence to bread-winning for himself and his dependents should not be at the cost of health and vigour of the workman”. Covid-19 makes the healthcare workers fall under the contours laid down in the CERC judgment, thereby making the lack of PPE a grave violation of the Fundamental Rights of the healthcare workers.

The scheme of unemployment wages provided by the State to the workers is plagued with major issues. There seems to exist a large gap between those who need it versus those who are availing it. The Employees State Insurance Scheme is available only to those who are in the organised sector.

In Delhi, payment of Rs 5,000 is provided only to construction workers. There seems to be no measure taken by states like Delhi or Punjab to provide payment or compensation to others in the informal sectors. One such example is that of street vendors – a group which has been well-documented and covered under the Street Vendors Act. Therefore, measures to award unemployment benefits to workers seem to be arbitrary and without any reasonable classification.

The struggle for the State to guarantee Fundamental Rights escalates as a secondary wave of issues surface. These are concerned with education and privacy. The legislature by inserting Article 21-A made Right to Free and Compulsory Education a Fundamental Right under the Indian Constitution. Before the crystallising it as a Fundamental Right, the Supreme Court had held that Right to Education (RTE) is encompassed under Article 21 of the Indian Constitution. Moreover, the right received legislative mandate with the promulgation and enactment of Right to (Free and Compulsory) Education Act, 2009.

Similarly, the judgment of KS Puttaswamy v. Union of India held that the Right to Privacy is a Fundamental Right under Article 21. Since the imposition of the lockdown, both these rights have been massively undermined or ignored by the State. Reports show that mid-day meals have a direct impact on increasing enrolment in schools. (Photo: Reuters)

As schools remain closed, there is no provision for the RTE Act to make up for the loss of education. In fact, the RTE Act has a dangerous provision. Section 16 of the Act provides that no student studying in elementary classes (Class I to Class VIII) will be held back or expelled. The resultant effect would be that all students studying in government schools in elementary classes will be promoted without receiving or attaining the necessary education, thereby making their fundamental concepts weak. These will have far-reaching ramifications for students in later stages of competitive examinations.

The suspension of the mid-day meal programme will also bring hardships for a lot of families. Reports show that mid-day meals have a direct impact on increasing enrolment in schools. It serves as an incentive for poor families to send their children to school as the cost of feeding a child (for a meal) is covered by the State. With the food reserves being directed to the current pandemic, and the uncertainty about the extent of the lockdown, the State might be compelled to prolong the suspension of the mid-day meal programmes even after the end of the lockdown.

Recent studies have also shown that there is a strong correlation between poverty and dropout rates, where dropout rates were maximum in minority communities. These were based upon socio-economic reasons such as cost of education, children being required for outside work for payment in cash (labour) and the need to work in family farms, etc. With India being on the brink of a financial crisis, where growth has been on an all-time low and unemployment on an all-time peak, it seems obvious that there will be an increase in the dropout rates to make up for the loss of family income. There is an urgent need for the State to rethink incentives for the students to avoid a case of high dropouts.

Another new trend seems to be a breach of personal information in the garb of Covid-19 tracking. There have been several instances where the state governments have released personal data of people who have been quarantined. This data includes names, passport numbers, residential addresses and phone numbers. This release of personal data has become a privacy concern and has been stated as a gross violation of the legitimate expectation of privacy — a Fundamental Right laid down in the landmark judgment of K Puttaswamy v. Union of India.

The State ignoring individual privacy becomes more worrying with the launch of Aarogya Setu App, which tracks movement and health details among other personal data of the users. As of now, no one is aware of the ramifications related to the personal data breach. It can only be known in the months to come.

The initial, as well as the upcoming set of Fundamental Right violations, have gravely questioned the Constitutional fabric.

While on paper, the Constitution always guaranteed a set of rights; in reality, the State is suffering from an implementation failure. The new set of problems (education and privacy) have not received a response from the government yet. However, sooner or later, the State will have to deal with them.

Quite interestingly, these fault lines have often been highlighted by experts much before the outbreak of Covid-19, but have time and again been overlooked by the State. There is an urgent need for the State and the judiciary to re-evaluate and fix these implementation gaps.

Also read: The poor are the most vulnerable

#Constitution, #Fundamental rights, #Coronavirus lockdown, #Covid19
The views and opinions expressed in this article are those of the authors and do not necessarily reflect the official policy or position of DailyO.in or the India Today Group. The writers are solely responsible for any claims arising out of the contents of this article.

Shivkrit Rai is a law researcher and Nipun Arora is a lawyer at Delhi High Court.