With a sustained dip in revenues, the states are justified in seeking relief from the Centre. However, they have to also do their own bit to revive the economy.

One did not need a rocket scientist or economist to predict that the Indian economy would tank in Q1 of 2020 when it was in the throes of a near-total lockdown. During the quarter between April and June 2020, no other country in the East or West was so completely shut for such an extended period at a stretch. Hence, it also stands to reason that the Indian economy — with its large component of the informal sector — would have taken a bigger hit than many others. So, it is rather amusing to observe the sense of shock and anguish among the Commentariat after the Q1-GDP was announced.

It can be nobody’s case that both economic and Covid-19 situations are not serious. Also, while a contraction was expected, perhaps the ordinary citizen had not envisaged a shrinkage of nearly 25 per cent, allowing some margin of error.

But it is of bigger concern that with two months of Q2 also behind us, we are far from out of the woods. The pandemic continues to scourge the nation, following an unpredictable trajectory. States that earlier appeared to have brought the infections under control have slipped back. There have been some late bloomers. In some states like Maharashtra, the virus has stubbornly stayed put. 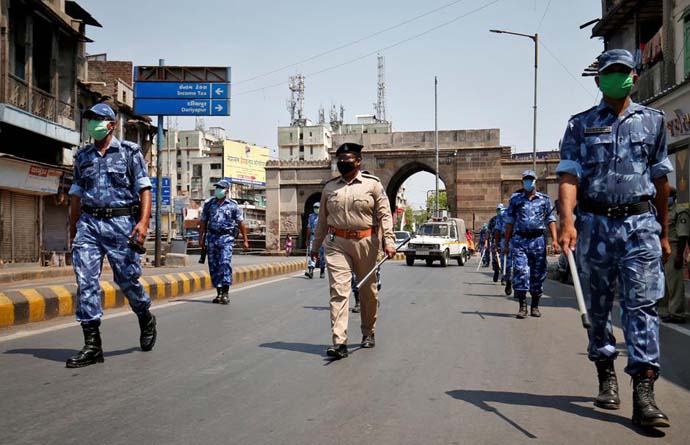 Many states seem all too eager to take the easy route of extending the lockdown and restricting economic activity. (Representational photo: Reuters)

Statistics has a habit of covering some vital facts while revealing only what is suggestive. In a vast country like India, averages rarely tell the full story. Reality is seldom unidimensional. Thus, in discussing the total number of Covid-19 cases in the country, we forget to notice that five states — Maharashtra, Andhra Pradesh, Tamil Nadu, Karnataka and Uttar Pradesh — contributes more than 50 per cent of the cases in the country. Including the next five large states — Gujarat, Delhi, Telangana, Odisha and West Bengal — the tally goes above 80 per cent.

It is no coincidence that these top states are also very important in terms of economic activity and employment generation. Their underperformance would naturally pull down the national GDP sharply. However, barring a few notable exceptions like Uttar Pradesh, one is unable to see a concerted effort in other states to restart the economy.

Without a doubt, the state revenues have been very adversely hit by low GST collections. So, they are justified in seeking relief from the Centre. However, the states have to also do their own bit to revive the economy. Instead, many states seem all too eager to take the easy route of extending the lockdown and restricting economic activity. But that cannot be the solution. It will, in fact, start a downward spiral that will be difficult to get out of.

The answer lies in instilling confidence among the people to step out — taking adequate precautions, practising hygiene, social distancing and avoiding large gatherings (especially in the coming festive season).

The good news is that testing has hugely increased. With more people opting for home-quarantine under medical supervision, hospital beds are being freed up for serious cases. Due to early detection, recovery rates have vastly improved. If this message is spread, it would encourage people — especially migrant labour — to return, thus aiding resumption of work in sectors like construction and logistics.

Another good story has been the crops in the Rabi season. As per reports, the monsoon has been good and geographically well-distributed. Therefore, the Kharif crop should be good too. However, for the rural economy to benefit from it, markets have to open up and goods transportation across the country has to return to normal quickly. This can only happen if the states lift restrictions rapidly.

The states can do much more even with their resource-constraint by simply focussing on governance and facilitating trade and industry. So far, the district administration in states has been single-mindedly engaged in Covid-19 control. This led to many restrictions being imposed at the local level that curtailed business activity. This was necessary up to a point. But now after six months, we have to learn to live with Covid-19. The process of Unlock has to start in right earnest while putting safeguards in place, continued testing and back-up medical facilities. The good news is that testing has increased, and with early detection, recovery rates have vastly improved. (Photo: Reuters)

States will need to identify some key industries and sectors that will offer quick results — for instance, minerals and mining industry in states like Rajasthan, Madhya Pradesh and Chhattisgarh, textiles industry in Tamil Nadu, and the jute industry in West Bengal. Industry-specific plans will have to be drawn up. A ‘one size fits all’ approach will not work. States may consider setting up empowered high-level inter-ministerial task forces as it may require regulatory relaxations or short-term special concessions.

At this time of crisis, ‘ease of doing business’ acquires special significance. As per latest rankings published, some developed states appear to have regressed on this score. State governments must ensure that all departments work on a ‘mission mode’ to help businesses by cutting down bureaucratic hurdles, corruption and harassment that still exists at lower and local levels.

Similarly, measures have to be taken to restart the cities. In this, the municipalities have to play a proactive role in resuming public transportation, opening up shops and establishments by providing help in the sanitisation, create hygienic conditions for street food vendors to come back, provide training for “safe working” to self-employed service providers like plumbers and electricians.

Government intervention may be required to provide moratorium or waiver of municipal taxes and delay rent payment for government-owned real estate and public arenas, such as municipal markets. Urban power-tariff needs a relook and low-season discounts may work in favour of both — consumer and electricity companies.

Though the government has been on the receiving end of criticism, its achievements have not been insignificant. The efforts to provide food security to 140 crore people through the lockdown and pandemic has been a huge success. While the number of infected cases has risen, it has to be seen in the context of the size and population of the country. In any case, it is far lower than the dire predictions made by many experts at the beginning of the pandemic. Latest data shows that schemes for providing work to migrant workers have also yielded impressive results. This is an encouraging sign indeed.

Now the focus has to move from welfare to demand generation. While schemes can be devised to put money into the hands of the people — whether through tax reliefs or Direct Transfers — the key will be to get people out of homes to rejoin work and resume normal activities. In this, the state governments have to play a bigger and much more proactive role.

If the Centre and the states work in perfect tandem, we may yet surprise the world with a sharper and faster recovery than what the naysayers prophesise.

Also Read: Why govts cannot be blamed for not taking 'the right step' in containing Covid-19