How Covid-19 and Facebook are interconnected in US, Brazil and India

USA, Brazil, and India are the world’s worst Covid-19-affected countries that are also the most polarised democracies and the largest consumers of Facebook.

USA, Brazil, and India are the world’s worst Covid-19-affected countries. The daily infection rates are accelerating in these countries, and they account for almost half of the world's total infections of more than 12 million. The scientific analysis of the daily growth trend in the three worst-affected countries shows no signs of peaking any time soon. Hence flattening the infection curve and containing the pathogen is also out of sight for these countries.

USA, India and Brazil are also the world's most socio-politically divided and polarised democracies in the world. The top leaders in these countries were elected on a conservative nationalist political agenda and by sharply dividing their secular democracies. All three of them stoked fear, and used management by fear (MBF) to sell their message of ‘imminent chaos’ if they were not elected. They projected themselves as the lone saviours of their respective countries from grave threats such as immigrant-invasion, minority religions taking over the country, and sharp social inequality disrupting the peace and prosperity of their nations. 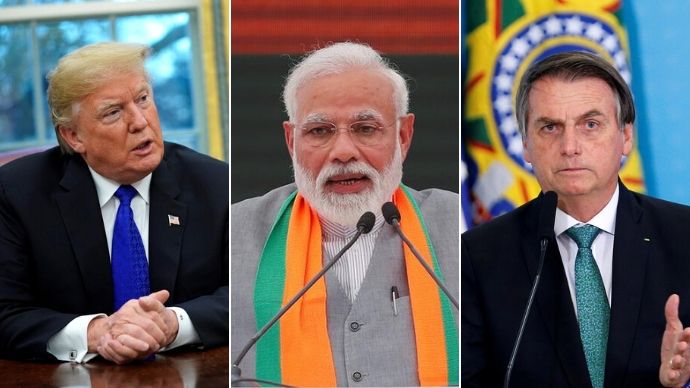 All three leaders branded and positioned themselves as individuals above and different to their respective political parties, government structures and process. (Photo: Reuters)

All three leaders branded and positioned themselves as individuals above and different to their respective political parties, government structures and process. It was all about them as individuals to save the society. While campaigning during his run for Presidency, Donald Trump said in 2016, “I alone can fix the dark, violent, weak America.”

Trump and Modi ignored their respective countries’ intelligence agency briefs in January 2020. While their state governments were battling to contain the eruption of the Covid-19 pathogen in late January and early February 2020, Trump and Modi organised the biggest rally in India that Trump had ever addressed in his life. The rally was held in Ahmedabad, India on February 24, 2020. Before leaving for India, Trump told reporters, “I am (going to India). He (Modi) said we will have millions and millions of people. He thinks we will have 5-7 million people just from the airport to the new stadium.” With around 43 per cent of Americans dependent on Facebook for their daily newsfeed, every sharply divided day in America is a festival for Mark Zuckerberg. (Photo: Reuters)

Another winner benefitting from the polarised communities of the world is Mark Zuckerberg. Zuckerberg owns 60 per cent of Facebook — one of the most profitable companies on the planet, with annual revenue of approximately USD 70 billion. The social media platform gets data supply from nearly a third of humanity — a total connected community of around 2.5 billion. Data from the connected communities is the critical fuel of Facebook’s business engine. Its computer algorithms are designed to divide community opinions and thoughts to maximise the data supply to the platform. Facebook’s own recent internal business strategy documents concluded that their “algorithms exploit the human brain's attraction to divisiveness (by securing more data feeds into the platform)”. With around 43 per cent of the Americans dependent on Facebook for their daily newsfeed, every sharply divided day in America is a festival for Mark Zuckerberg.

For Facebook, a divided world is the best fodder for data. The connected world community is highly polarised on opinions and facts on the origin of the virus, its containment and prevention strategies prescribed by epidemiologists and scientists battling the pathogen, and the social cost versus economic costs of the ensuing lockdown.

Since the Covid-19 pathogen started killing human beings in the connected world in January 2020, and as most of the world businesses suffered from an economic lockdown, Facebook's share price hit an all-time high of USD 230.75 on May 27, 2020, delivering a market value of around USD 640 billion.

Which are the top three countries that supply Facebook with the free supply of uninterrupted data fuel every nanosecond?

India, USA, and Brazil — the worst affected by Covid-19 and highly polarised countries in the world.

#Facebook, #Jair bolsonaro, #Narendra Modi, #Donald Trump
The views and opinions expressed in this article are those of the authors and do not necessarily reflect the official policy or position of DailyO.in or the India Today Group. The writers are solely responsible for any claims arising out of the contents of this article.