Hypocrisy, thy name is Marxist

The double standards, delays and duress faced by victims of alleged sexual harassment within the CPI (M) in Kerala shows the party's real face.

In the wake of the sexual harassment allegations against its lawmaker PK Sasi, the Communist Party of India (Marxist) is on the backfoot in Kerala. Although the complainant — a Democratic Youth Federation of India (DYFI) district Secretariat member — first reached out to CPI(M) state Secretary Kodiyeri Balakrishnan and Politburo member Brinda Karat, it was only after she forwarded the complaint to CPI(M) general secretary Sitaram Yechury (and his subsequent confirmation of receiving the complaint) that the matter came into the public domain. An impression has since gained ground that the party sat on the charges levelled against its influential MLA.

While the CPI(M) state leadership refused to confirm the existence of the complaint prior to Yechury’s disclosure, the party has continued to tiptoe around the issue, even after it tumbled out.

Last Friday (September 7), the state Secretariat of the CPI(M) issued a carefully-worded statement  on the issue. But that has actually complicated things since many of the claims in the communiqué runs counter to the assertions of party leaders since Tuesday (September 4), when the matter first surfaced in the media.

For instance, the statement claims the state Secretary (Kodiyeri Balakrishnan) took cognisance of the complaint he received on August 14 and heard the complainant out and followed it up by summoning the accused MLA for a hearing at the party headquarters.

But as late as this Tuesday, the MLA claimed ignorance about the existence of the complaint.

Moreover, the statement says the party Secretariat was briefed about the matter by Kodiyeri Balakrishnan on August 31, where a resolution was passed to institute an internal inquiry Commission, consisting of Minister AK Balan and PK Sreemathi.

But, on September 4, the same AK Balan was on record, saying he didn’t have any knowledge of the complaint.

It’s clear that either the CPI(M) state Secretariat or the Law Minister of Kerala are lying.

The next question — is it not incumbent upon the party to forward a criminal complaint it receives to the police?

The CPI(M) apparatchiks, who often take a high moral ground on women’s issues, seem to think that Comrades aren’t to be subjected to the law, like mere mortals. 'Workers of the world, unite.' But how safe are women workers in the CPI(M) anyway? (Photo: PTI)

It is clear that the Commission’s political affiliation prevents it from acting on the matter.

There have many attempts to apparently influence and coerce the victim into withdrawing the complaint if reports in the Malayala Manorma daily are to be believed. The offers reportedly range from money to leadership positions in the DYFI.

Such reports might severely dent the morale of women Comrades in leadership positions today — along with the impressionable young women in DYFI.

While the CPI(M) tries to project themselves as a progressive and gender-sensitive party, the history of the party, leading up to the present, presents a vastly different reality. In the 1987 assembly elections in Kerala, the Marxists projected KR Gowri as the face of the campaign. It was assumed that she would be nominated as the chief minister if the CPI(M)-led Left Democratic Front (LDF) came to power. The campaign slogan used to be — “Keram thingum Kerala nattil KR Gowri bharicheedum” (Kerala, the land of the coconut trees, will elect KR Gowri as the chief minister/ruler).

In the end, EK Nayanar was the chosen one.

KR Gowri still bears witness to the treachery of her Comrades, at the ripe old age of 99 today. 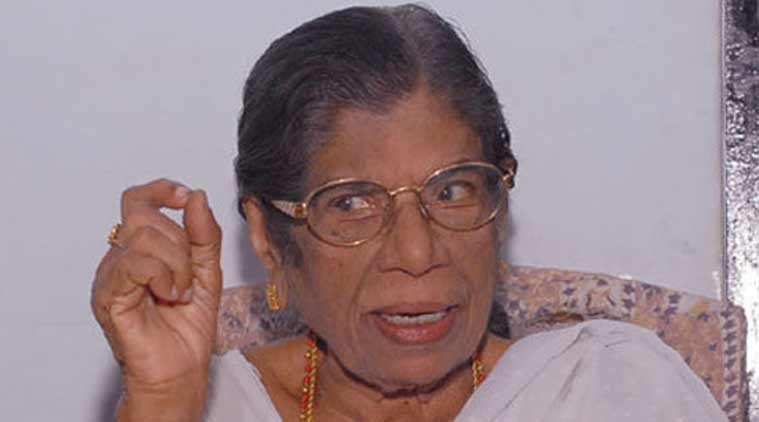 KR Gowri: She was projected as a female CM of the Left. But it never actually happened. (Photo: Facebook)

Misogyny aside, there have been serious cases of sexual harassment and moral turpitude raised against its senior leaders, even in the not so distant past. PK Sasi’s namesake P Sasi’s case is still fresh — in fact, it’s almost a case of déjà vu for the Marxist party. P Sasi was the powerful Kannur district Secretary of the party in 2010 when a case of sexual harassment was levelled against him by the wife of a DYFI leader. Although the party reportedly tried to shield him, a similar complaint by the-then Thaliparamba MLA, CKP Padmanabhan, against Sasi for allegedly harassing his daughter, put paid to it.

With the central leadership standing firm, the CPI(M) Kerala state Committee’s initial disciplinary action to suspend Sasi for a year had to be revised to expulsion in mid-2011.

In the same year, another towering CPI(M) district Secretary — the Ernakulam District Secretary Gopi Kottamurickal — was embroiled in yet another reported sex scandal. He was also shown the door.

Both expelled district Secretaries continued to be closely associated with the party through feeder organisations and made their back eventually.

In fact, P Sasi went back to his practice as a lawyer and defended the Marxists named in the political murders of Comrade TP Chandrasekharan and Kathiroor Manoj.

Come 2018, both P Sasi and Gopi Kottamuickal are back in the CPI(M) — Kottamurickal even made it back to the state Committee of the party in the last CPI(M) state Conference.

What happened to CKP Padmanabhan and the young DYFI comrade who complained about Sasi?

Padmanabhan, a former state President of the feeder organisation “Kerala Karshaka Sangham”, was first relegated to the branch (the lowest in the party structure) from the state Committee for alleged “financial misappropriation” within months and is not active in politics anymore. Even the young DYFI Comrade also found himself out of party ranks soon.

One hopes the young woman who complained against PK Sasi doesn’t end up getting victimised by the vindictive Comrades on some other pretext.

Prominent Left ideologues, like Appukkuttan Vallikkunnu and Dr Azad, have written about the blatant double standards practised by the CPI(M) in sacking Padmanabhan, citing “financial misappropriation” (merely on account of his position as the President of the feeder organisation) while conveniently forgiving EP Jayarajan for more serious charges of financial malpractice.

Such hypocrisy isn’t the sole preserve of Kerala Marxists. Brinda Karat’s seeming double standards on the matter need to be recounted — especially since Karat apparently received a copy of the complaint forwarded by the young woman three weeks ago. 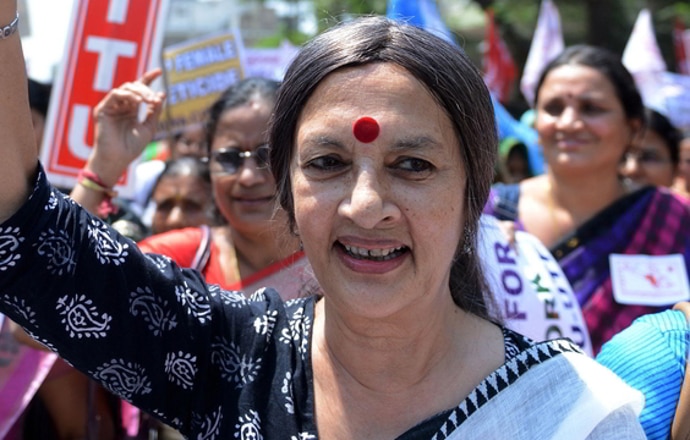 Perhaps it's not so simple to smile when your own party members are accused of harassment. (Photo: PTI)

When the sexual harassment case involving journalist Tarun Tejpal was sought to be handled internally by the then-managing editor of Tehelka, Shoma Choudhary, in 2013, Karat wrote a scathing Op-Ed piece in The Hindu. She wrote: “If other rapists locked up in the jails of India had been beneficiaries of such an (in-house) approach, they would all be lining up at the doors of their victims, offering their apologies, promising months of atonement. It is easier after all to atone in the circle of loving friends and families than to face the law and the consequences of your crime.”

But she seems to have a different yardstick when it comes to her fellow Comrades of the CPI(M).

Five years later, Karat seems to be banking on the “agency” (of the victim) argument dished out by those defending Tehelka back then. 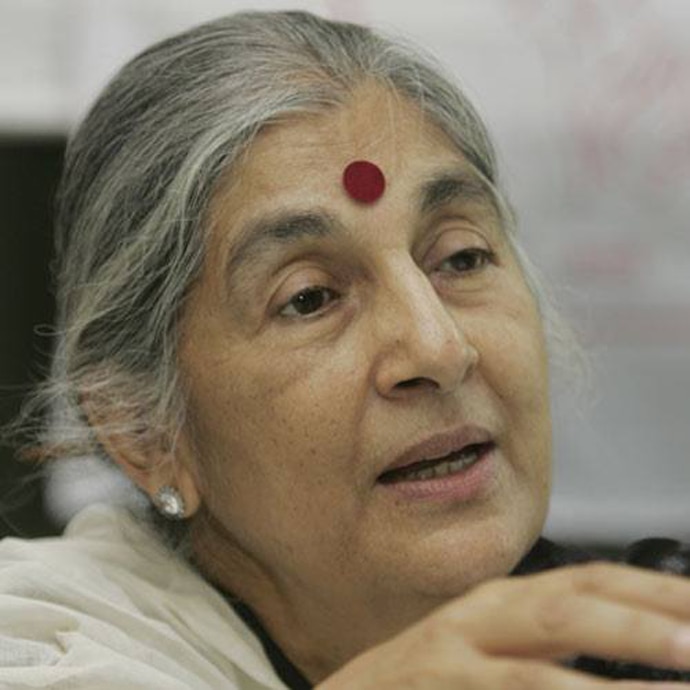 Subhashini Ali: Where are the few female faces of CPI(M) leadership when the younger women need them? (Photo: Facebook)

On being contacted, Comrade Subhashini Ali, the other female Politburo member, too sought to distance herself from the matter.

One can only hope the complainant in PK Sasi’s case musters up the courage to go public for the law to take its course.

To paraphrase Shakespeare (with due apologies) — Hypocrisy, thy name is Marxist.

Post your comment
#Sitaram Yechury, #Brinda karat, #Sexual harassment, #Kerala
The views and opinions expressed in this article are those of the authors and do not necessarily reflect the official policy or position of DailyO.in or the India Today Group. The writers are solely responsible for any claims arising out of the contents of this article.