Around five lakh houses have been partially damaged and countless palms of betel nut and coconut are flattened in Maharashtra because of cyclone Nisarga.

The cyclone Nisarga in coastal Maharashtra on June 3, left the Konkan region devastated. With a speed of 130 km per hour and a radius of 60 km, it’s landfall was at Alibaug. It lasted for two hours before moving north and getting weaker. By then, around five lakh houses were partially damaged. Countless palms of betel nut and coconut have been flattened. As the electricity polls and transmission wires are damaged, the districts of Raigad, Ratnagiri and Sindhudurg have been in the dark for almost a week. The electricity will not be restored for another fortnight. 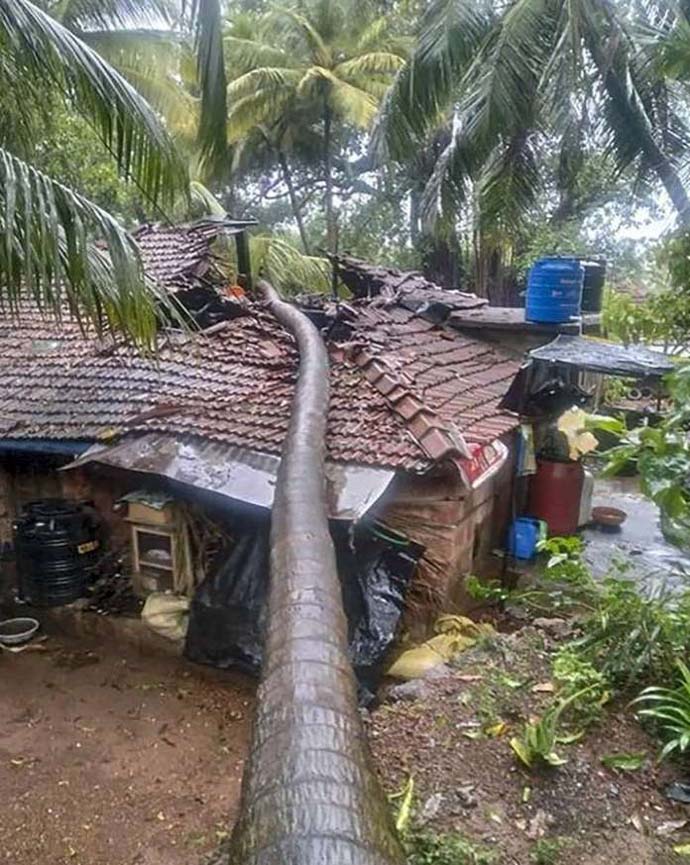 Around five lakh houses were partially damaged and countless palms of betel nut and coconut have been flattened because of cyclone Nisarga. (Photo: PTI)

As the cyclone blew away roof – tin sheets of their houses the residents are struggling to procure new ones from the market. “There is a shortage of tin sheets and the prices have skyrocketed,” says Kunal Patil, a resident of Choul near Alibaug, Raigad. “I had to stand in queue for more than two hours to get these. There are several other families who are forced to live under the open sky.” This is especially a concern as the monsoon will arrive soon.

As wells, the major drinking water sources, are filled up with the remains of trees the residents are prioritising cleaning them up. The food grains that they had stored in their houses before the monsoon are also damaged. Almost 90 per cent of palms of betel nut and coconut, which have a large pie in the regional economy, have been destroyed inflicting huge financial losses. At a rough estimate, almost eight lakh families have lost their livelihood.

The Maharashtra government has started a process to assess the loss which might take a month to complete. Chief minister Uddhav Thackeray has announced a relief budget of Rs 100 crore, Rs 75 crore and Rs 50 crore for the districts of Raigad, Ratnagiri and Sindhudurg respectively. “We have not yet calculated the total loss,” he said on June 5.

The BJP and the Nationalist Congress Party (NCP) are unanimous in demanding that the state government should amend its 2019 Government Resolution that empowers the administration to pay aid of Rs 5,000 per family during natural calamities. A Lok Sabha member from Raigad Sunil Tatkare of NCP and BJP leader Vinod Tawde agreed that a budget of Rs 5,000 will be insufficient as each family has suffered a loss between Rs 20,000 to Rs 1 lakh.