After Ravin Sisodia's death by lung infection, it seems a riot-like situation is being carefully orchestrated in the poll-bound UP village.

There's no end to hypernationalism in the country which is reaching dizzying heights with each passing day. Given the heightened India-Pakistan tensions and the unprecedented war hysteria gripping the country like a terrible fever - atleast on TV channels - the ugly variant of nationalism, accompanied by all the repulsive chest-thumping, tricolour-exploiting flag-wrapping kind of sideshow, is fast becoming the norm.

In Bisada village of Uttar Pradesh's Dadri - remember Dadri? - this peculiarly virulent form of nationalism, it seems, has acquired the "infantile disease, the measles of mankind" variety that Einstein and many others had once feared in no uncertain terms. 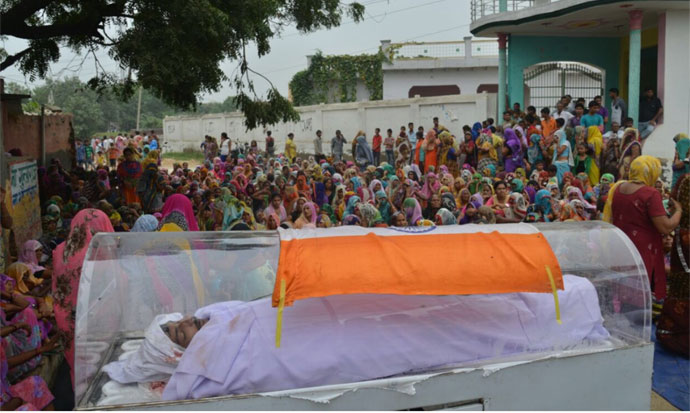 Ravin Sisodia, jailed for allegedly beating Mohammad Akhlaq to death in Dadri last year (along with a number of others who participated in the heinous crime), died at a Delhi hospital on Tuesday, October 4. While a detailed report about the case of death is being awaited, jail authorities have said Ravin was suffering from a lung infection.

"Jail authorities have told us that he was suffering from a lung infection. But I have asked for a detailed medical report," Gautam Budh Nagar district magistrate N P Singh said, The Indian Express reported.

As expected, tensions have been on the rise in the village ever since the news of Sisodia's death came in. From organising a panchayat at the village temple to demand the arrest of ML Yadav, jailer of Kasna jail, where Ravin Sisodia was lodged, to demanding the arrest of Jan Mohammad, Akhlaq's younger brother, for cow slaughter - the denizens of Bisada, it seems, have taken it unto themselves to "deliver justice". Perhaps they would like to repeat the same kind of "justice" that was meted out to Akhlaq a year ago?

On a soberer note, however, this time, the district administration, taking no chances, has invoked Section 144 in the area. Since Tuesday night, security has been tightened in the Bisada region, anticipating engineered tensions and even raising the communal hackles by political parties and their affiliated goons.

At the same spot they hd brutally killed Akhlaq last year,#Dadri vlgrs drape Tiranga on the coffin of hs murder accused & made him a martyr pic.twitter.com/ltNI6kGNzK

Remember BJP MLA Sangeet Som - Muzaffarnagar riots accused, anti-beef crusader, meat exporter et al? He is about to pay Bisada a visit and say a few words to the protesters. We can very well expect what those words are going to be.

Not only this, at the site of the protest, hate speeches are being delivered without no seeming police interference.

Wait, there's more. Firebrand BJP leader Sadhvi Prachi, famously known for her ramzaade vs haraamzade remark, also reached Bisada and addressed a crowd of over 500 people who were demanding a compensation of Rs 1 crore for Ravin's family and a government job for his wife, The Hindustan Times reported.

With the UP elections round the corner, the BJP might use this death to further their polarisation agenda in the state. Unless the UP government takes stringent security measures, it seems like a riot is brewing in Dadri.

Will any action be taken against these open, proactive, vitriolic and dangerous actions and speeches?

Well, it's been more tha a year since Mohammad Akhlaq was lynched to death in the previously nondescript town of Dadri. The case is under trial and charges are yet to be framed against the accused. Maybe therein lies the utterly unpalatable answer.

(All pictures and video: @hindureporter)

Also read: India should be ashamed of charging Akhlaq's family with 'cow slaughter'

#Communalism, #UP Assembly Polls, #Mohammad Akhlaq, #Dadri Lynching
The views and opinions expressed in this article are those of the authors and do not necessarily reflect the official policy or position of DailyO.in or the India Today Group. The writers are solely responsible for any claims arising out of the contents of this article.