How Hindus killed a Muslim over beef and murdered India's secularism

The Dadri mob wanted Muslim blood, and whether the victim had eaten beef or mutton, or violated the codes of the Hindu-Rashtra-to-be, mattered little.

Far away from the photo ops and boasts of Digital India, democratic India was lynched to death. The prime minister, on his visit to Ireland, chose to take a dig at secularism in India. While a bare hour away from the Indian capital city Delhi, a Muslim man was bashed to death with bricks by a mob over a rumour that he had eaten beef. The mob had been instigated by a priest who declared from a temple that the man, 50-year-old Mohd Akhlaque, had eaten beef and thereby hurt Hindu sentiments. To avenge the rumoured death of a cow, a human being was done to death.

What is bizarre is the fact that in the eyes of the anti-secular discourse in India - a discourse of leaders of the ruling BJP, the Sangh Parivar family of assorted Hindu majoritarian groups, and sections of the media - it is the victim who is the accused. 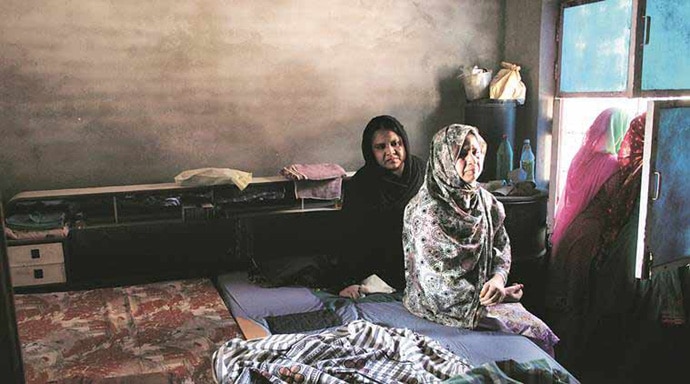 Aggrieved wife and daughter of Mohd Akhlaque, who was murdered over rumours of beef-eating. [Photo credit: Agencies]

For instance, a headline in the Hindi daily Amar Ujala described the incident thus: "Man accused of killing an animal dies, followed by a ruckus" (Pashuvadh ke aaropi ki maut, bawaal). Look at the way this line uses the word "killing" for the purported cow, while describing the murder by a lynch mob as a "death". And the way outrage and anger at the lynching is trivialised by the use of the word "bawaal", which conveys an unseemly ruckus.

A former MLA of India's ruling party BJP has similarly declared that those arrested for the killing are "innocent kids" who got "excited" by the grave crime of eating beef. An activist of my party, the CPIML, visited the family of the victim today, in the Noida hospital where they stand vigil over the victim's son Danish who has survived the lynching but is still in a coma, and likely to suffer brain damage.

Akhlaque was an ironsmith who fashioned agricultural implements. He had managed to educate his children. His eldest son is in the Air Force as ground staff, and 21-year-old Danish was also studying to get into the Air Force like his brother. Their sister was witness to the terror of a mob breaking down their door, beating her grandmother, mother and herself before dragging off Akhlaque and Danish. She ran from one neighbour to another begging for help, but none came forward. In vain she insisted that the meat in their fridge was mutton not beef. The mob wanted blood, Muslim blood, and the minor detail of whether he'd eaten beef or mutton or otherwise violated the codes of the Hindu-Rashtra-to-be, mattered little.

Some members of the mob have been arrested. But the real leaders of the lynch mob don't live in Dadri alone. For the past couple of months, BJP-ruled states have gone on a rampage, banning meat during a Jain festival. Bans on beef have been longer lasting, in several BJP-ruled states. Modi himself, in his speeches during the parliamentary polls, referred to the meat industry as a "pink revolution", implying that Muslims were murdering cattle, especially cows. BJP and RSS leaders have made the phrase "gow hatya" (cow murder) popular, instead of cow slaughter.

Ever since the Muzaffarnagar communal violence that paved Modi's path to power, western UP has been a seething cauldron of prejudice and hatred against Muslims, kept on a slow fire and brought to a boil now and then by the Sangh Parivar.

In 2002, five Dalits were lynched to death in Jhajjar, Haryana, by a frenzied mob. VHP leader Giriraj Kishore Singh, a veteran member of the RSS family that makes no secret of holding the reins of the Modi government, then answered the question "Is the life of a cow more important than that of the Dalits?" with these many words: "According to our shastras, the life of a cow is very precious (Shastron ke hisab se, gau ka jeevan bahut moolya hai)".

Since Muzaffarnagar, ironically, the Sangh Parivar has tried to mobilise Dalits too on an anti-Muslim plank, willing them to forget that the RSS has been as violent to the Dalits as it has been to Muslims and women.

In the vocabulary of the BJP and RSS, simple human actions of eating and loving are transformed into crimes. Eating beef or even non-vegetarian food (two-thirds of India is non-vegetarian and many communities and regions in India relish beef) is called murder, while love can be called rape or jihad if a Hindu woman has fallen for a Muslim man. The lynchings, murders or kidnappings done to avenge the cow or the Hindu woman who has eloped with a Muslim man are justified: "They kill our mother, the cow; they rape or steal our daughters; they provoke us." Recall that Modi's right-hand man Amit Shah in his election speeches in Western UP after the Muzaffarnagar episode, openly said, "No one wants to riot, but riots happen only to take revenge on the community that rapes our mothers and daughters." 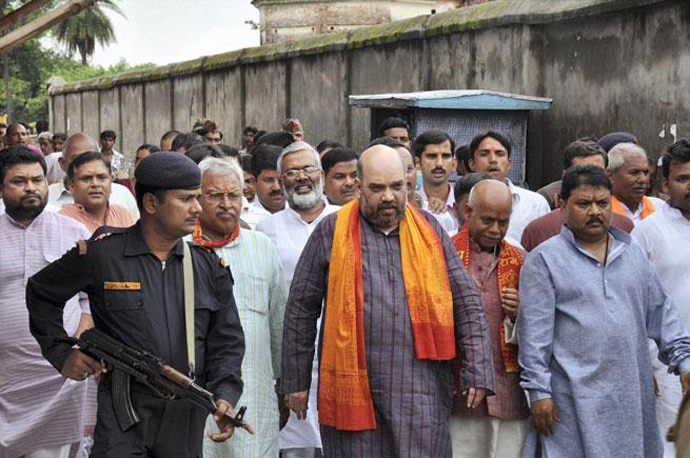 BJP national president Amit Shah had made communally inciteful speeches in the wake of Muzaffarnagar riots.

It is this toxic politics that killed Akhlaque. A politics that declares India to be a Hindu Nation, and brands every Muslim as a terrorist - a lustful love terrorist or a killer of cows.

Less than a week ago, in Kanpur in UP, a Muslim man was lynched to death because it was rumoured that he was a "Pakistani terrorist". In both Kanpur and Dadri, what were the police doing while a mob gathered and beat them to death? These episodes also underline the hollowness and cynicism of what passes for dominant "secular" politics in India. UP is ruled by the Samajwadi Party, which justifies every bid for power in the name of being a secular alternative to the BJP. But the SP governmentt allowed Muslims to be massacred and made homeless in Muzaffarnagar and then callously evicted the victims from refugee camps. The same government does not bat an eye when two Muslims are killed by communal mobs in one week in UP. Can such a party and a government really be called secular?

In 1937, in the USA, Abel Meeropol wrote this powerful poem against the serial lynching of black men who would be killed (often on the pretext of raping a white woman) and hung from trees:

Blood on the leaves and blood at the root,

Pastoral scene of the gallant south,

The bulging eyes and the twisted mouth,

Scent of magnolias, sweet and fresh,

Then the sudden smell of burning flesh.

Here is fruit for the crows to pluck,

For the rain to gather, for the wind to suck,

For the sun to rot, for the trees to drop,

Here is a strange and bitter crop.

The spate of killings of black youth in the USA today remind us that the lynchings continue, with the difference that it's now the police who do the killing. These killings, as those lynchings, are all justified on flimsy pretexts and vague suspicions that claim the victim was in some way threatening to society.

Will India wake up to at least recognise the strange and bitter fruit of Muslim men - tortured or killed in police custody as "terrorists", hanged to death by the State on thin evidence to avenge the "collective conscience of the nation" (a phrase coined by the Supreme Court to disguise a lynching), publicly stripped or humiliated by a mob for loving a Hindu woman, or lynched for "eating beef"?

US citizens who hit the streets in thousands to declare that #BlackLivesMatter have done much to redeem their country and fight racism. Will Indian citizens say no to lynch mobs and declare that #MuslimLivesMatter?

#Dadri, #Digital India, #Secularism, #Hindutva
The views and opinions expressed in this article are those of the authors and do not necessarily reflect the official policy or position of DailyO.in or the India Today Group. The writers are solely responsible for any claims arising out of the contents of this article.