How Dakota, the gooney bird, earned a special place in IAF's history

The vintage aircraft has weathered many a storm and won fierce battles for India.

In early May 2016, it was reported that a Dakota aircraft belonging to Rajya Sabha MP Rajeev Chandrashekhar was being restored in the UK. The MP wanted to make the aircraft airworthy and gift it to the Indian Air Force (IAF) for its fleet of vintage aircraft.

The defence ministry has agreed to receive the gift, with the rider that the aircraft be formally handed over in India. The defence minister of the earlier government had turned down the proposal saying that there was no precedent of accepting a vintage aircraft for the IAF as a gift.

Soon the iconic aircraft, one of the sturdiest airplanes ever manufactured, would make its way to India. 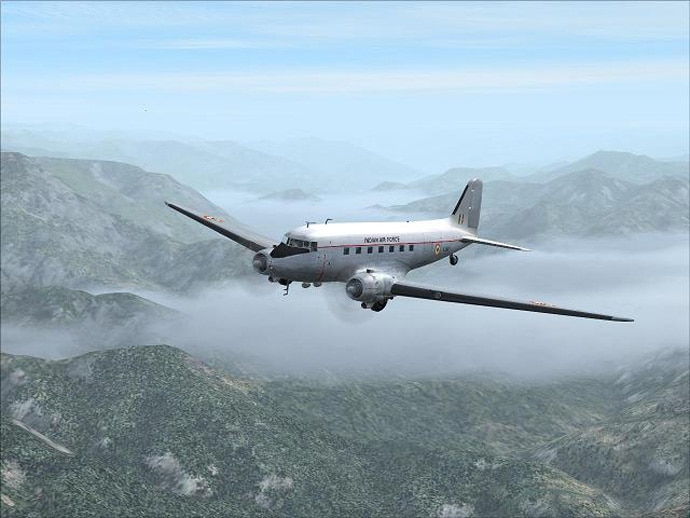 The Dakota revolutionised air-travel in the 1930s and 1940s. Its lasting effect on the airline industry and World War II makes it one of the most significant transport aircraft ever made. Civil DC-3 production ended in 1942 with only 607 aircraft being produced.

However, together with its military derivative, the C-47 Skytrain (designated the Dakota in the Royal Air Force), and with Russian and Japanese built versions, over 16,000 were built. The aircraft operated from every continent in the world and participated in every major battle.

When he was asked to list the weapons that most helped end World War II, wartime general and later US president Dwight D Eisenhower had replied: the bazooka, the Jeep, the atomic bomb and the Dakota.

According to Fali Homi Major, who retired as chief of air staff, "It was the finest aircraft ever designed and the most rugged. It has operated from every airfield. It can fly in the day, at night; in hostile mountainous areas. It can land on short runways as well as on grass or dirt airstrips."

Retired air marshal Sharad Yeshwant Savur calls it "the most forgiving aircraft in the world and virtually indestructible".

It is reported that during WW II when a Dakota landed in a jungle, a quarter of one of its wings got shorn off. It could not take off. So the pilot and the crew decided to cut off a quarter of the other wing as well. It worked and the plane flew home - they named it the DC 2½.

The Dakota has played a sterling role in the history of the IAF. Much nostalgia can be associated with the aircraft as it was one of the pioneers of the transport fleet of the IAF.

After WW II, a need for a transport squadron was felt for the Royal Indian Air force. The RIAF selected the Dakota.

"The first transport squadron was raised with a fleet of 10 Dakotas in 1946. Numbered 12 Squadron, the aircraft were received by the Squadron and training was to commence. However a tropical storm rendered all the aircraft unserviceable, as they were left out in the open. Replacements soon arrived and the first transport squadron of the IAF took wings.

Within a year of the induction of the Dakotas in 1946, war broke out in Kashmir between Indian and Pakistan. The Pakistan raiders soon converged on Srinagar and the Indian government pressed the Dakotas into service. The first batch of Dakotas with troops of the Sikh Regiment took off for Srinagar on October 27, 1947. It was a risky operation as it was not clear whether the airfield was in the hands of the raiders or not. The Dakotas rose to the task and regularly ferried troops into the Valley and the safety of Srinagar was secured," writes Madan G Singh, a retired group captain of IAF.

Similarly, in Poonch, but for the bombings carried out by the Dakotas followed by the first ever landing at a manually-levelled, short 600-yard strip, that tract would have been lost to Pakistan.

"The Dakota is the reason why Poonch is still with us," says Pushpindar Singh, military historian and author of Aircraft of the Indian Air Force: 1933-73.

However, it was the lack of road and aerial access to Ladakh which was a cause of serious concern. It was evident that airlift of troops and materials to Ladakh was the only course open.

The first Dakota landed at Leh on May 24, 1948, on an unprepared surface at 10,682 feet. To land at Leh, one had to negotiate towering mountains with no heating facilities, no pressurization and without any surveyed route map.

My late father, a transport pilot, flew Dakotas in his initial years in the IAF. He was posted with 12 Squadron in Agra. Later, a detachment of the squadron was sent to Srinagar. Briefing at four in the morning at the airport, take off by 4.30am, two-three sorties a day, frequent long waits for weather clearance - elements conspired to make life very difficult indeed.

I recall my father getting up at 3am every morning, drinking a hot cup of tea made by my mother and leave for the airport on his scooter at the height of the Kashmir winter.

He also flew several sorties to Leh in the Dakota in the '50s. Even during that period, flying to Leh was a treacherous operation. Imagine flying the unpressurised Dakota over the mountain ranges in that are much higher than its optimum flying ceiling, necessitating unwieldy oxygen cylinders and cumbersome clothing to protect against the cold.

Add to that the bumpiness owing to the weather; only visual flying and landing because of either a lack of, or rudimentary, flying and landing aids; no landmarks available in the winters when the entire landscape wears a shroud of white; no question of any safe forced landing in case of an emergency, and one gets an idea just how tough and unforgiving the conditions could be.

Even though from the air the majestic landscape stands out as an unforgettable sight, it is no compensation for the strain and rigours that the crew had to undergo. In no country did Dakotas have to cope with flying in such challenging conditions!

"The Dakota became a standard transport aircraft of the IAF. The Dakota was also used as a transport and cargo carrier during the 1962 war with China. It did a commendable job. But its greatest use was in the East in transporting troops and supplies to inaccessible regions in Assam and Nagaland," adds Singh.

In the 1971 war it contributed significantly to the liberation of Bangladesh. It played a crucial role in the famous Tangail drop (the biggest and most ambitious air drop operation since WW II).

One Dakota was gifted to the Mukti Bahini and became known as the "Kilo Squadron". The start of the BAF can be traced to this Dakota. Again in 2014, on a formal request from the BAF and reviewing the historic ties, one Dakota aircraft from the IAF museum was gifted to the BAF. The aircraft was also used extensively in India for commercial flying.

President Sukarno ordered vice president Mohammad Hatta and prime minister Sutan Sjahrir to leave the country to attend the first Inter-Asia Conference, organised by Nehru, in July 1947 and to foment international public opinion against the Dutch. They were unable to leave as the Dutch controlled the Indonesian sea and air routes. Nehru asked Biju Patnaik, later to become a well-known politician and longtime Chief Minister of Odisha, who owned Kalinga Airlines and was an expert pilot, to rescue them.

Patnaik flew to Java in his Dakota and brought them out, reaching India via Singapore on 24th July, 1947.Patnaik also played a role in the Kashmir operations ferrying troops to Srinagar in his Dakota.

The Dakota used by Patnaik in Indonesia has been parked for decades at the Kolkata airport, gone to seed due to decades of neglect. It will be a fitting tribute to both the pilot and his machine if the aircraft is given the status of a national treasure and given a befitting permanent abode.

The Dakota is still around. Large numbers continued to see service in a wide variety of niche roles well into the 21st century. Approximately, 400 DC-3s and converted C-47s are flying to this day as a testament to the durability of the design, many examples being over 70 years old.

The "Gooney Bird", as the Dakota was fondly called, is not going away anywhere any time soon.

#Indian Air Force, #IAF, #Dakota DC-3
The views and opinions expressed in this article are those of the authors and do not necessarily reflect the official policy or position of DailyO.in or the India Today Group. The writers are solely responsible for any claims arising out of the contents of this article.