Jailing Dalit activists will come to haunt Adityanath in 2019

Saharanpur clashes, the fallout of the arrest of Chandrashekhar Azad of Bhim Army and most recently the unwarranted detention of Dalit activists in Uttar Pradesh’s capital Lucknow may not augur well for the BJP in general and CM Yogi Adityanath in particular, especially when the party is eyeing the 2019 general elections and banking heavily on the state of UP.

On Monday, some Dalit activists, including former IPS officer SR Darapuri, along with eight others, were arrested for defying prohibitory orders. The group was in the state capital to protest against the forced deboarding and detention of 45 Gujarat Dalit activists from a train in Jhansi.

The activists were carrying a 125kg soap bar with the intent of handing it over to Yogi Adityanath. The move was viewed as a retaliatory step by the activists against the alleged distribution of soap and shampoo by officials to some Dalits in Kushinagar, just a day before the CM’s visit there.

The action had generated much heated political debate as the activists termed it as a humiliation for Dalits.

The incidents again bring into sharp focus the intent of Yogi Adityanath towards Dalits. With leaders like BSP chief Mayawati and activists espousing the Dalit cause, the recent incidents have the potential to be lapped up as the desired ammunition to nail down the Yogi.

After the alleged distribution of soap and shampoo in Kushinagar, Adityanath got into damage control mode. As such, the very next day, during his visit to Gorakhpur, Yogi not only unveiled a statue of Dr Bhim Rao Ambedkar but also shared food with over 100 Dalits, seated amid them.

The gesture was a calculated political move to wean the community towards the BJP. A separate aashana was earlier put for Yogi and later removed to send out the message that he shared food with the Dalits without any VIP treatment and sat with them on the ground. His act was however criticised by Mayawati. 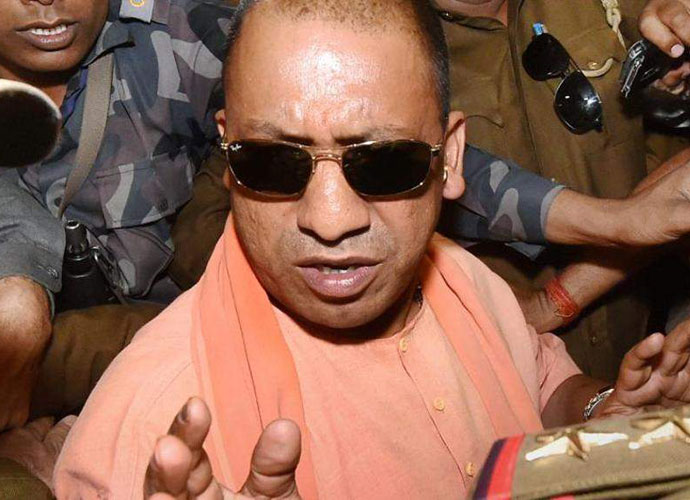 CM Yogi Adityanath is trying to woo the Dalits.

The BJP knows well that for the realisation of its larger ambitions for 2019, the Dalit vote is crucial. But recent incidents may work badly for the BJP. Despite being a mahant, Yogi Adityanath is looked upon as a Kshatriya leader and as such he needs to walk the extra mile to ensure that the Dalit vote - which in recent elections has shown some inclination towards the BJP - remains intact.

A considerable delay in controlling the Saharanpur violence has generated a feeling of alienation among the Dalits. The damage control was too late and too little and bruises still remain. The deboarding of Dalit activists at Jhansi and the Monday arrests in Lucknow also send wrong signals about the present government’s disposition towards the community.

Mayawati, who is already making desperate attempts to consolidate her traditional votebank, is leaving no stone unturned to ensure that the Dalits come back to her. This coupled with the rise of activists across the state is bound to keep Dalit politics alive.

Wrong signals can alienate a major chunk of Dalit votes and the same may reflect badly in 2019 where the BJP has much at stake. With a thumping majority in UP, the party is eyeing a repeat of its 2014 performance in the Lok Sabha and for the same, Dalit votes would be crucial. Thus, damage control has to be done in a systematic way and feasting with Dalits would not be enough.