How about declaring a Dalit as Opposition's joint PM candidate for 2019?

The politics over origin of birth and caste labelling of presidential candidates amounts to trivialisation of the institution.

When will political parties fight over sending a Dalit to the South Block?

Outsmarted by the BJP in the race for the president’s election, the Congress-led opposition can still outwit the Modi-Shah duo.

They can declare their commitment to choose a Dalit for the prime ministerial race in the 2019 election against Narendra Modi. No names, just a commitment.

That will put the duo of Gujarat’s chatur banias on the back foot. That will energise the restive Dalit population against the BJP’s blatantly anti-Dalit actions.

That will energise the minorities, tribal and the marginalised sections to coalesce into an anti-upper caste combine against the BJP leadership.

The presidential election will come and go, one of the two Dalits will be elected to sit in the Rashtrapati Bhavan — for the second time after KR Narayanan — for the next five years. The presidential election will come and go, one of the two Dalits will be elected to sit in the Rashtrapati Bhavan.

The commitment to elect a Dalit as the prime ministerial candidate will have the potential to upend the national politics. It can turn the caste pyramid of Hindu society that has held sway over the politics and power on its head.

But they won’t. No party leader will risk losing casteist hold by choosing a Dalit for the most powerful position. The 2019 elections’ prime ministerial choices are more or less clear: Modi versus Rahul Gandhi. There could be a third candidate in the event of a hung Parliament, anyone but a Dalit.

Declaring their intent to choose a Dalit for the PM’s chair will be a sure way of breaking the upper caste’s stranglehold on the politics by the secular, pro-Dalit, pro-subaltern opposition parties. That will be a sure way to put the RSS-led BJP on the mat.

The hard reality is that the physical distance between Raisina Hill and South Block is a furlong, but the chasm political parties have to traverse for a Dalit to reach the Prime Minister’s Office is vast and seems, at least for now, unbridgeable.

In competitive politics, therefore, political parties have to feign a fight over ceremonial president’s office to perpetuate the pro-Dalit tokenism.

The BJP’s decision to choose Ram Nath Kovind, a Dalit, as NDA’s presidential candidate and the Congress-led opposition parties’ response to put Meira Kumar, another Dalit, in contest is a ludicrous and silly tokenism.

Neither the Congress that has thrived for long on tokenism nor the BJP that has shed even pretensions of being an inclusive party is Dalit-friendly.

Dalit cause is far from their mind. Dalit votes are on their agenda.

The votes are in danger of slipping away. With increasing radicalisation of Dalit voters who have begun to challenge the existing social order in more meaningful manner than ever, parties have little choice. The tokenism that guides political parties to woo Dalit votes may not pay dividends in future.

Even Bahujan Samaj Party leader Mayawati is facing Dalit’s wrath for her tokenism or for her compromised ideological stances. She has empowered Dalit population to great extent and she has made them aware. At the same time she has failed to keep the Dalits' aspirations alive.

Mayawati’s helplessness can be gauged by the fact that she has to sail with upper caste-led parties to keep her Dalit credentials intact. She has to jump from one bandwagon to another in the service of silly tokenism even after having been chief minister of the largest state of UP on four occasions.

She altered her decision to support Kovind in favour of Meira Kumar after the Congress-led opposition announced its candidate. None of the two Dalits is her choice. She has again proved that she is just an appendage of upper caste-led BJP and the Congress.

Mayawati should have been in the lead to set the agenda if Dalit politics were to be at the centre of the presidential election. The Congress-led joint opposition should have declared that Mayawati as a Dalit will be part of a committee to select a candidate for the president’s post. That could have taken the wind out of sails of the BJP if she had announced the opposition’s presidential candidate before the BJP did.

All the brouhaha over BJP’s masterstroke versus the opposition’s masterstroke in making the presidential election a contest between two Dalits is a political tamasha and nothing more.

Sadly, the theatre of the absurd is being played over the president’s office. Political parties should have left the office of the president to remain above partisan politics, above a slugfest over tokenism. 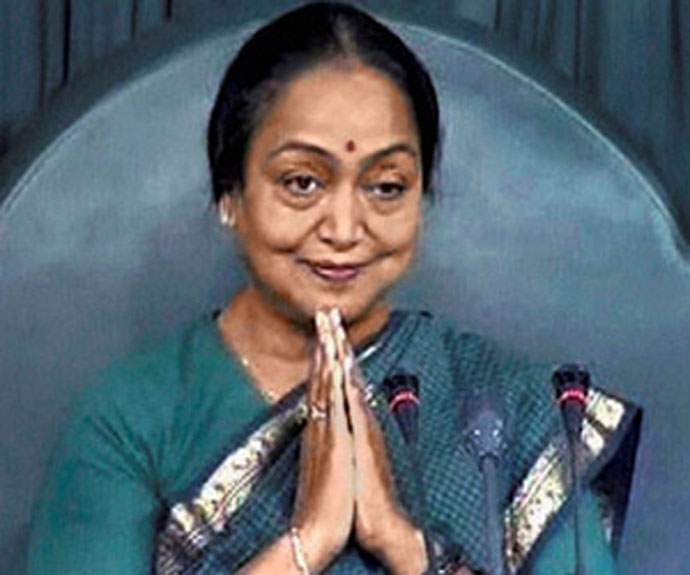 The politics over origin of birth and caste labelling of presidential candidates amounts to trivialisation of the institution of the president.

To expect that a Dalit president will bring Dalit’s votes bears no evidence. Presidents have never influenced votes. Three Muslim presidents — Zakir Hussain, Fakhriuddin Ali Ahmad and APJ Abdul Kalam — did nothing to influence votes. They contributed little to make the community confident and secure citizens. They all had their contributions to public life, but none could politically transform the community.

Likewise, Narayanan could have transformed Dalit’s status in the society if the office of the president could be instrumental.

The fact that the Muslim and Dalit communities today feel insecure and are being victimised for their choice of as basic need as food firmly disapproves the idea that president’s origin of birth could be transformative.

The politics over origin of birth and caste labelling of presidential candidates amounts to trivialisation of the institution of the president. The entire gamut of political spectrum is guilty of lowering the dignity of the office.

Well, the time is not lost. The NDA has majority in the electoral college to elect Kovind. Meira Kumar can give good fight, but can’t hope to win in the given arithmetic.

So, why not set the agenda for the 2019 election. If indeed the Congress-led opposition parties are serious to advance the Dalit’s cause, they can declare that a Dalit will be their joint candidate against Modi.

In the meanwhile, the Congress can elect Meira Kumar as party president, not send her to retirement as a defeated presidential candidate.

That would be serious, not token, Dalit politics.

Also read: Why does India not care for a Dalit's life?