Bhima Koregaon violence and death of a Dalit teen: What happened to Pooja Sakat?

Reports about the 19-year-old's mysterious death did appear in the media, but nobody took to the streets for her, nobody ran hashtags.

In a landmark Marathi film, Samna, made by renowned filmmaker Jabbar Patel in 1974, a question is often asked in a hushed tone: "What happened to Maruti Kamble?". The film revolves around the clout of a sugar baron in a village of Maharashtra, who falsely implicated a former military man, Kamble, killed him because he could challenge his economic progress, and passed it off as suicide. Fishiness of the developments, and the fear of the sugar baron, ensures people only ask this question in a hushed voice.

Today, time has come to ask a similar question: What happened to Pooja Sakat?

She was an important witness in the Bhima Koregaon violence. She, along with her brother, had helplessly watched her house in the village of Wada being burnt down by a mob of 150, following which she had received death threats. Her brother even filed a complaint in February, but police typically ignored it.

On April 22, Pooja’s body was found in a well near her home. She had gone missing before that, and the police hadn’t even realised it is a witness whose life is at stake. The police woke up after recovering her body. Her chappals had been found outside the well, and the police concluded it’s a suicide, without even looking for a note. Initially, they wanted to conduct the post-mortem in a local hospital, but after her family protested, the police charged Rs 2,000 from them and transferred the body to Pune.

Pooja’s family consistently maintained it’s a murder. Even Prakash Ambedkar speculated along similar lines. After which, the police investigated seriously and arrested nine under IPC Section 306 (abetment to suicide), and Section 34 of the Scheduled Castes And Scheduled Tribes (Prevention of Atrocities) Act. It includes the ones who set her home ablaze, and threatened her family members. But it would be difficult to say whether it is a suicide or murder until the results of post-mortem are out, say police. 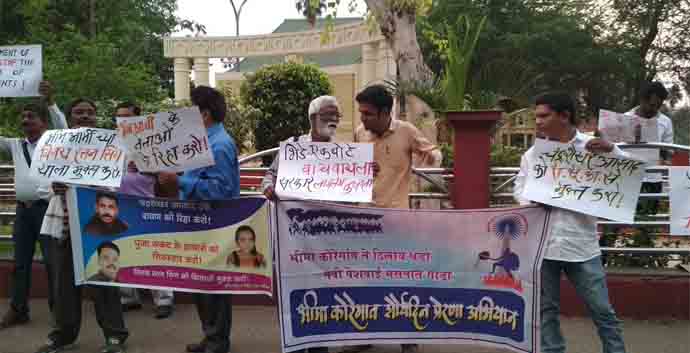 Because the police investigation has been lackadaisical, the ones initiating the Bhima Koregaon Yatra founded a fact finding committee, which reveals that police never examined the spot where Pooja’s body was found. Further, Pooja’s body hadn’t been bloated, indicating it wasn’t in water for a very long time. The wounds on the body were fresh and the nose was bleeding.

It begs the question whether the police were trying save anyone. One does not have to be a Sherlock Holmes to know the people burning her home and threatening her. They had been summoned to the police station a few times. Yet, when Pooja’s brother complained, why was it ignored? Who benefits from losing a key witness in the Bhima Koregaon violence?

Pooja’s father Suresh has been an old foe of the radical Hindutvawadis in their village. On January 1, they had called for a bandh in the vicinity of Bhima Koregaon, and Suresh had bravely defied it. With his colleague Ashok Athavle, Suresh initiated the prabodhan rally, organised blood donation camps and so on. And as revenge, his home was reduced to ashes the following day. But the police did not extend any protection to the family. Even when the family determinedly began reconstructing the house, and received further threats.

Since January 1, the area has been polarised with vicious atmosphere. After Pooja’s death, it has intensified. And within a fortnight of her death, the village has planned to drive out the Sakat family, for Suresh, who hails from the Matang community, is apparently “defaming the village” by filing false cases. The gram panchayat here is acting like khap panchayat. The government should, in fact, prosecute it.

This is a story of a Dalit household in a supposedly progressive state. It is a tragic reminder of the kind of life Ambedkar’s followers are meted out.The ones who organised the riots at Bhima Koregaon are roaming free. Milind Ekbote was arrested after a long time and received bail in a short time. But Manohar Bhide is still untouched. We must also remember that Pooja's mysterious death transpired after Ekbote’s release. In the meantime, however, Ambedkarites are being labelled Naxals.

The horrified image of Pooja’s bloodstained body continues to haunt me. News stories about her mystifying death did appear in the media, but hardly has anyone followed it up with vigour. Nobody took to the streets for her, nobody ran hashtags.

In all likelihood, we will forget about her after a while. And maybe occasionally ask in a hushed tone: What happened to Pooja Sakat?

#Maharashtra, #Hindutva, #Bhima Koregaon, #Dalit teen's death
The views and opinions expressed in this article are those of the authors and do not necessarily reflect the official policy or position of DailyO.in or the India Today Group. The writers are solely responsible for any claims arising out of the contents of this article.