Maharashtra police are once again playing the Naxal card to contain protests against upper-caste atrocities.

The growing number and increasing brutality of caste atrocities by upper castes on Dalits and tribals in Maharashtra in recent months has led to considerable disquiet in the affected communities throughout the state.  Discontent, particularly among Dalit youth, has been brewing, with social media like Facebook and WhatsApp generated platforms like "Facebook Ambedkarite Movement (A Non-Political Organisation)" and "Jatiya Atyachar Virodhi Kruti Samiti" being used to vent concern and coordinate action. With political bigwigs of the community busy in pre and post-election manoeuvrings, the movement has seen leadership emerging organically from youth involved in numerous online and offline actions and interactions.

Anger peaked at the particularly butcherous slaughter of three members of a Dalit family at Jawkheda in Ahmednagar district on the night of October 20 2014. The fact-finding report of the Dalit Atyachar Virodhi Kruti Samiti pointed out how the bodies were hacked into such tiny bits and dumped around that the police took all of two days to just locate the entire bodies. As protest meetings and demonstrations spread throughout the state, the politicos and most of the media took a stance of ignoring the issue. Even when almost 500 demonstrators were picked up on October 31 from Wankhede Stadium, the site of the swearing-in of the new CM Devendra Phadnavis, there was a near-total media blackout of the protest. It seemed as if the strategy of the powers that be was to wish away public anger by closing their eyes to it, hoping to wear out or win over those in the lead. Till date not one of the murderers has been arrested. But the police were only too eager to detain the protestors. 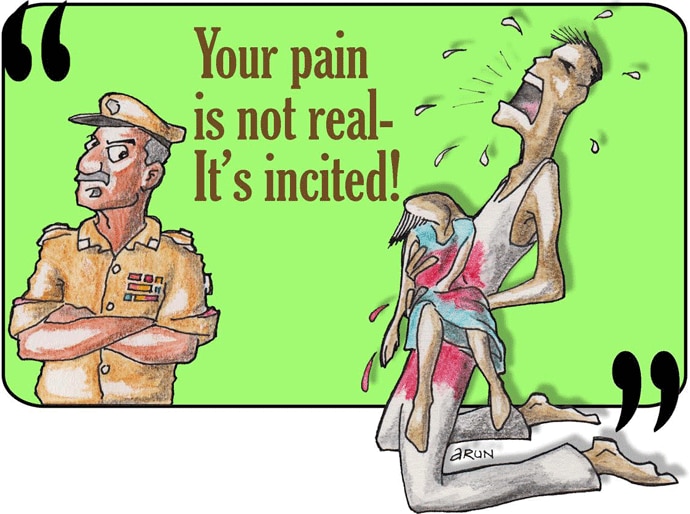 But as the protests spread and intensified, the state agencies promptly shifted to Plan B of raising a spectre of Naxalism. Ravindra Kadam, Special IG, Anti-Naxal Operations (ANO), told the press that the agitations were part of a conspiracy by Naxalites to create caste tensions and instigate riots in the state. Though Kadam had no substance in his allegations, some sections of the Marathi and English media unquestioningly publicised it, and the Shiv Sena mouthpiece, Saamna, even chose to comment editorially on it.

The ploy of using the Naxal bogey to deal with movements against Dalit atrocities is not new. It was first used by Pankaj Gupta, the then incumbent of the post now held by Ravindra Kadam, during the agitations following the Khairlanji massacre. It was also voiced by RR Patil, the then Home Minister and his comments during Khairlanji found mention and an echo in the present Saamna editorial. It seems the police and politicos follow a pattern.

This ploy however serves many a purpose. Firstly it serves to belittle and discredit the protestors by making them seem to be the pawns of some "external" forces. It questions their sincerity and forces them to go on the defensive to prove their constitutional credentials. The police and government, who are under attack from the Dalit community for their inaction and even support to the upper caste forces perpetrating these atrocities, are thus able to not only deflect attention from their own neglect of their constitutional responsibilities, but are also able to make it seem that the other side is not genuine. 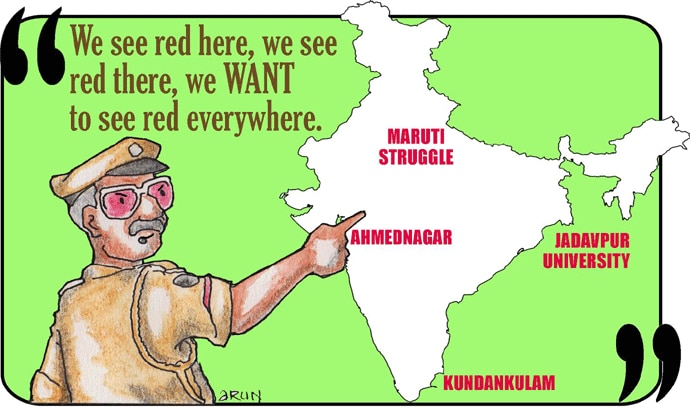 The other underlying rationale for branding the protestors as Naxalites is in the threat it implicitly holds of indiscriminately bringing down repression on them. Despite constitutional provisions guaranteeing free thought and expression, and the government has introduced laws like the Unlawful Activities Prevention Act that criminalise thought and ban ideas, ideologies and the organisations professing them, by declaring them as "unlawful". Though the Supreme Court has, in several judgments, held that action can only be taken on those who are involved in violence, the police often harass and arrest anyone they claim to have "links". By linking the banned Maoists to the agitating Dalit organisations, the state agencies are in effect sending out a thinly veiled warning that all activists, if not all participants, in the protests may face the strong arm of the law. They are thus criminalising the ongoing democratic movement and, should it continue to strengthen and spread, they are preparing the grounds for crushing it.

This manoeuvre is however not peculiar to Maharashtra. It has in fact been seen time and again where legitimate struggles have remained resolute and not compromised. The Maruti workers struggle in Haryana was similarly branded as having a Maoist hand and 147 workers have been kept in jail for almost 16 months; the Kudankulam anti-nuclear plant struggle of Tamil Nadu was branded as being inspired by a foreign hand and over a thousand protesters had sedition charges clamped on them; many agitators in West Bengal including the struggling students of Jadavpur University have been accused by Mamata Banerjee of being Maoists and extremists. 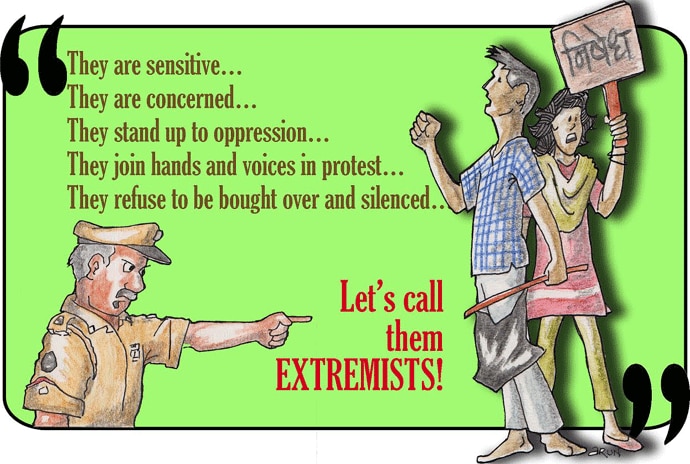 The most convenient part of any such accusations and conspiracy theories is that there is no need and no intention to prove such accusations. Willing accomplices in the media repeat the conspiracy theories a hundred times over without any verification until they are believed to be true. The ANO knows that it will never be called upon to prove a Naxal conspiracy to fan caste tensions and cause riots. The same department had, at the time of my (Arun Ferreira's) arrest in 2007, told the media that I was plotting to incite caste riots by bombing the Diksha Bhoomi memorial complex in Nagpur. There was however no mention whatsoever of such a plan in either the FIR, the charge-sheet or at any time during the trial. The false propaganda through the media had anyway served its purpose of discrediting me and my co-accused in the eyes of the common man.

This time too, the propaganda of the IG seems to be bringing him some results. Considerable energy of the activists has been diverted to countering the conspiracy theorists, to demonstrate at the newspaper office which propagated the bogus news and in taking the fight against them to court. The distractions and confusions could result in the democratic protests against caste atrocities losing some steam. Such an outcome would however be tragic and against the interests of democracy. A strong movement against caste atrocities is necessity if such incidents are to stop. The present movement has shown great promise and is one of many such movements that are a must along the long journey to achieving that most basic of our democratic tasks - the annihilation of caste. Its right to protest should be protected and upheld by all who dream of a more just and casteless society.

#Maharashtra, #Maoist, #Naxalism, #Dalit
The views and opinions expressed in this article are those of the authors and do not necessarily reflect the official policy or position of DailyO.in or the India Today Group. The writers are solely responsible for any claims arising out of the contents of this article.