Darjeeling hills: Why BJP has turned the heat on Trinamool over Rohingya immigrants

With Lok Sabha elections nearing, the Rohingya issue is likely to intensify in West Bengal.

Almost a year after the 104-day agitation, the Darjeeling hills in West Bengal seems to be staring at a new crisis. It all began with a WhatsApp video that went viral in April.

The video shows more than a hundred people, in skull caps, descending on Kalimpong town from various directions. According to the video, the people in skull caps are Rohingya refugees.

A few days after the message went viral, the imam of a local mosque, Masood Sultan, called a press conference and insisted that “none of them were Rohingyas and they came all the way from South 24 Parganas to take part in a religious congregation". He also added that if outsiders are seen visiting the place on a regular basis, it is because they are in Kalimpong in search of work. Binoy Tamang, chairman of Gorkhaland Territorial Administration (GTA), too rubbished the "Rohingya rumours".

However, the issue gathered steam after absconding Gorkha Janmukti Morcha (GJM) leader Bimal Gurung wrote a letter to the Prime Minister on April 27, about an alleged Rohingya camp in Kalimpong.

According to Gurung, Rohingya immigrants are being "settled in Darjeeling and Kalimpong districts as a conspiracy to cause demographic imbalance and render Gorkhas and other native communities homeless".

In his letter, Ahluwalia, a BJP MP, said he had received reports of Rohingya settlements coming up in various parts of Darjeeling hills and why this is a threat for national security. He reportedly said Rohingyas have taken shelter in Lava, Delo, Melli and Rangpo areas of Kalimpong.

To find out the truth behind Ahluwalia's fears and the imam's words, I decided to travel to Kalimpong.

Melli is a village about 20 km from Kalimpong town, along the West Bengal-Sikkim border. I saw a hutment with tin roofs under the Teesta bridge, which is the only way to enter Sikkim from any other part of India.

I stopped my car and went there. As I went closer, the people seemed reluctant to disclose anything about themselves. There were about 30 Muslim families there. From whatever little they spoke about themselves, I could gather they were recent occupants — perhaps they came here not more than two years ago. 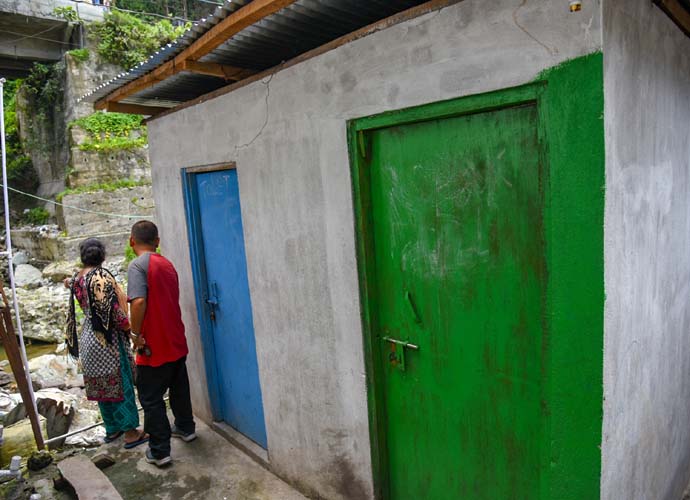 On my way back, I stopped by a nearby tea stall and ordered a cup of tea. There I met a man who told me he is a Nepali Muslim. “I and many others came here in search of work. There are about 30-40 families here. We have been living here for a long time, but, yes, some of our relatives are new to the area.”

From him, I came to know that they were mostly daily wage labourers, some of them worked as house helps, some others as masons and ragpickers.

The door of the mosque looked freshly painted. All these structures stood on government land.

Another woman I met at the tea stall casually remarked, “The slum dwellers face huge problems when the Teesta overflows. A few months ago, two children were swept away by the raging Teesta.”

A little taken aback, I asked if the children lived in the slums.

The woman then explained that the locals referred to the shanties as "Chhota Pakistan".

"But where you are standing right now is Pakistan," she added with a sly smile.

"Chhota Pakistan" looked similar to the first hutment. But a Dish TV antenna stuck out like a sore thumb. Here too, people seemed slightly uncomfortable with my presence. As I started enquiring into their whereabouts and the drowned children, no one answered. They spoke Hindi and Nepali. All of them claimed they do not speak Bengali. But, Raj Tamang, a go-between, told me that he could gather from their conversation that they have learnt the languages recently. 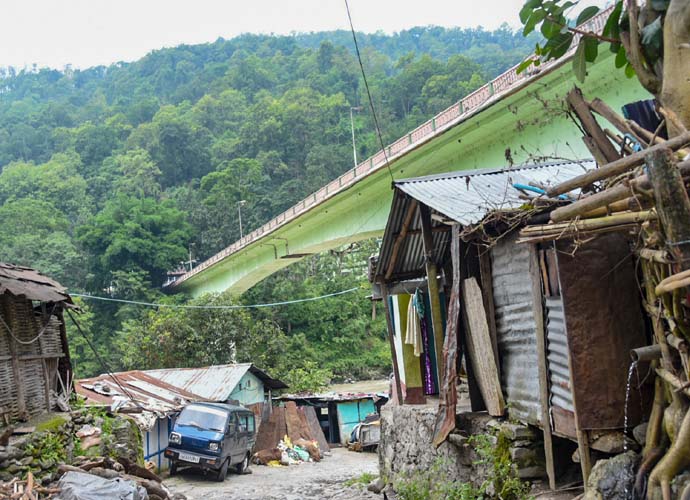 The shanties under the Teesta bridge. (Image courtesy: Tanmoy Bhaduri)

"What about the children?" I asked Raj, because I could clearly hear them speaking Bengali, although the accent was different.

"Who are these people? Are they Rohingyas?"

Some of them claimed they possessed Aadhaar cards. When I asked them to show one, some grew furious. A few others told me they have applied for one.

Back in Kalimpong town, almost everyone I met said the number of "outsiders" in and around Kalimpong has increased. “People often come here in search of work but some of them never went back. I don’t know if they are Rohingyas or not, but most of them who come here looking for daily wage are Muslims," said a shopkeeper near the Clock Tower.

I tried to speak to a group of labourers who came to Kalimpong recently. They were sitting at the side of the road where construction work was on. A man, who appeared to be a road contractor, asked them shut up. All of them got up and left the place.

I questioned myself, “Who are these people?”

“There are Muslim families near Thakurbari living here for generations, but they are small in number. Their lifestyle is very similar to us. They even wear clothes like us and take part in religious festivals of other communities as well. Some of them are married to Nepali Hindus or Buddhists. But of late some more Muslims have come to Kalimpong and  we don't share good relations with them. They recently protested against a pork shop and the local administration has shut it down,” a hotel owner on Kalimpong Main Road told me.

A GJM leader and supporter of Bimal Gurung said, “The CM of our state as well as her party sneaks in the Rohingyas to the hill areas to upset the delicate political balance in the area. They are trying to weaken the [Gorkhaland] movement and divide and rule the people.” The GJM leader, however, didn't wish to be named.

Political observers say the TMC is eyeing the Darjeeling Lok Sabha seat (currently held by the BJP) and hopes to work the Rohingya refugee crisis to its advantage.

The GTA, many believe, is working as the CM’s puppet with the names of Bimal Gurung and his close aide, Roshan Giri, already been struck off the voters' list. There are arrest warrants against the two leaders who have been absconding following the 104-day bandh. Although the residents of Darjeeling believe that the two will try to pull the strings during elections by fielding puppet candidates, it will be a difficult task for them.

The TMC will try make the most of this vacuum. Many believe the TMC is pushing Rohingyas into the hills for vote bank politics. At the same time the party is also trying its best to weaken the Gorkhaland movement for separate state with such strategies.

According to BJP state president Dilip Ghosh, the ruling TMC is "offering shelter to Rohingyas for votes". "But these illegal immigrants will pose a huge threat to national security and stability," he said.

Melli is not an exception.

There are similar shanties in various places across Kalimpong. If a local forest guard is to be believed, there is a similar camp in the Graham’s Home area as well. The local population believes Rohingyas are not new to this state. Some Rohingyas have reportedly come to settle in Hardaha, South 24 Parganas too.

The ongoing monsoon session of Parliament was rocked by the issue of illegal immigrants on July 31, following the publication of the second and final draft of the NRC in Assam. The BJP government at Centre informed the Lok Sabha that some of the Rohingya migrants living in India have been involved in illegal activities. The government also made it clear that Rohingyas do not have the status of "refugee" but are "illegal migrants".

With the Lok Sabha elections nearing, the Rohingya issue is likely to pick up steam in West Bengal.

The WhatsApp video in Darjeeling seems to be the beginning of a long-drawn battle.

Read this in Bengali

#BJP, #Illegal immigration, #Darjeeling hills, #Rohingyas
The views and opinions expressed in this article are those of the authors and do not necessarily reflect the official policy or position of DailyO.in or the India Today Group. The writers are solely responsible for any claims arising out of the contents of this article.