Why we need to celebrate Dashrath Manjhi, a Dalit, as the personification of love

While Emperor Shah Jahan built the Taj Mahal as a monument of love for his dead wife, Dashrath Manjhi, a Dalit who died on this day 13 years ago, broke the mountain that was the cause of his wife's death.

It is about the journey and the struggle of the man who dedicated his entire life to break a mountain to avenge the death of his wife whom he profoundly loved. Nowhere in world history has a similar story been seen where a man, through the sheer power of his grit and determination, challenged the mighty mountain in the name of love. Taj Mahal remains the crown jewel for India, but at the same time stories like those of Dashrath Manjhi must be recorded, remembered and respected by the authors of history.

A monument of love was envisioned and single-handedly created by Dashrath Manjhi that unfortunately has very few takers today. It is ill-fated that even after more than four decades, we as a society have not paid the dues that we will eternally owe to Dashrath Manjhi. After his wife died, Dashrath Manjhi decided to break the mountain so that deaths due to delay in reaching the hospital, like his wife’s, could be avoided.

Dashrath Manjhi redefined the contours of unadulterated love. Dashrath Manjhi was born in the Musahar community in Gehlour village in Gaya, Bihar. Musahars remain one of the most backward communities in terms of modern education and lifestyle. As the name suggests, Musahar in the Bhojpuri language means rat-chasers, that can be loosely interpreted as rat-eaters as well. They are primarily found in Bihar, Jharkhand, parts of eastern Uttar Pradesh and West Bengal. Jitan Ram Manjhi remains the only person from the community to reach the position of Chief Minister. Dr Hulesh Manjhi, a Patna University-based research scholar, became the first person in the community to complete his PhD. This fact in itself is a comment upon the journey of affirmative action and the commitment of the successive governments after Independence towards the socially-marginalised communities.

Dashrath also tried to reach the then Prime Minister Indira Gandhi to apprise her of the widespread corruption in Bihar. He walked from Gaya to Delhi, as he could not afford a train ticket. Dashrath had a picture clicked with Indira Gandhi when she was on a campaign trail in Bihar and her stage broke. Manjhi, along with some other people, literally shouldered the stage on their bodies. However, when he reached Delhi, he was not able to meet Mrs Gandhi. Instead, he was mocked by the people outside her residence. This shows the purity and simplicity that lies in penury.

Manjhi the movie was released in the year 2016. The movie, apart from explaining the heroic trajectory of the man, also exposed some difficult realities of the vestiges of the caste system — the intensely feudal mindset and approach of the upper caste and upper-class elites towards the subalterns in rural India. Caste denialists, who themselves are the product of upper-caste privilege of the social order, were appalled to notice the behaviour of a human being to a fellow human being. The movie — Manjhi (2016) — apart from explaining the heroic trajectory of Dashrath Manjhi, also exposed some difficult realities of the vestiges of the caste system system

Today is an important day in Dalit history. It is the death anniversary of the ‘Mountain Man’, Dashrath Manjhi. Dashrath had an eventful life. After getting married as a child, he was sent to Dhanbad to work in the coal mines. After coming back, he was able to “officially” live with his wife — Falguni Devi. For the daily chores, the family was required to travel every day. Once on one such journey, she fell from a mountain when she was pregnant. Dashrath was not able to get her to the hospital in time and that delay resulted in her death. It was at this moment when Dashrath decided to break the mountain so that deaths due to delay in reaching the hospitals could be avoided.

For the next 22 years, it was only about Manjhi and the mountain. Even after social ostracisation and humiliation, Manjhi not even once shifted his focus. His father apparently lost all hopes from him. Dashrath survived by eating leaves and drinking dirty water on most of the days.

What we saw after the period of extensive struggle for more than two decades was nothing short of a miracle. The distance from his village to the nearby hospital was reduced by 40 kilometres! Reaching the hospital was now not such a difficult proposition as it was when Dashrath had to take Falguni.

The Government of India released a postal stamp in the name of Dashrath Manjhi in 2016. However, even today, his family is not able to make ends meet. 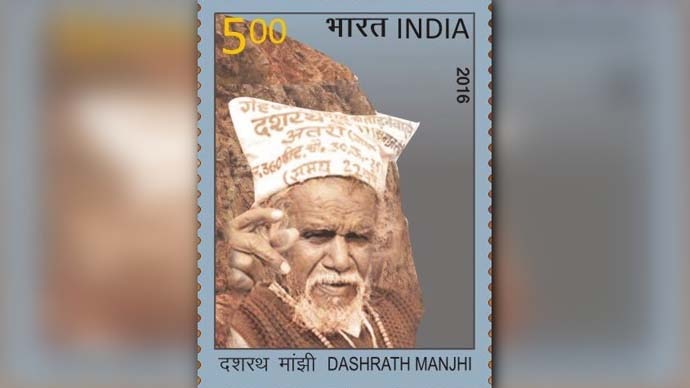 But as we remember Dashrath Manjhi on his death anniversary, the concern that I want to raise is why did the makers of our narrative deliberately ignore a Dalit hero like Manjhi and why the Dashrath Manjhi Path in Gehlour, Gaya must not be treated and projected as a monument of love like the Taj Mahal.